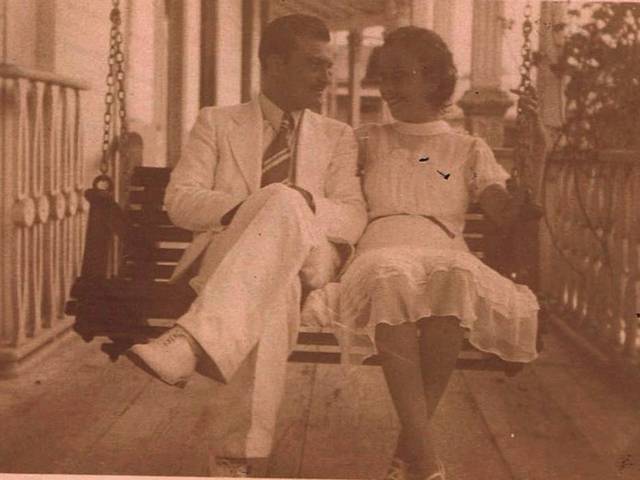 One sunny, mid-week afternoon, I arrived at home to family cars parked in the front yard. I did not have to dig for the house key in my bookbag. My father stood in front of the door as if shielding me from something.

As I entered the house, I heard a woman crying. Family members surrounded the crying woman whom I soon realized was my mother. It was the first time I saw her cry as a result of something I didn’t do. I did not have a broken arm or a D on my report card. On that afternoon, my mother had lost her father.

After I kissed her and said nothing, I went to my room and watched MTV when videos were all the rage. I did not understand what had happened. Death was one of those things I heard tossed around in other people’s conversations. I identified death with Friday the 13th movies and drug dealers on the news.

My whole life I had taken pride in the fact that all of my grandparents were alive and well. I wore that on my sleeve and carried it around as if I had won a trophy. Abuelo was not sitting in a Cuban jail cell, waiting in a ration line, and eating other people’s household pets. Abuelo was in Miami, living in a condo, shopping at Publix and eating steak. Now, Abuelo was suddenly gone, from complications related to diabetes, and there was nothing doctors, my family or I could do about it. Life threw us this curve ball and we had to catch it.

It was my first funeral and the only thing I looked forward to was to practice making my own tie. When I arrived at the funeral home, everyone was already there. The place smelled of cigarette smoke and Cuban coffee. Strangers offered their condolences, hugs and spearmint gum. All I could do was smile and walk away.

As I went toward the room, my grandmother sat crying in a chair next to the casket. Beautiful flowers were scattered near her. The reds, whites, yellows, and greens clashed with her black dress. She was surrounded by more strangers with some hovering over her like more of those loser contestants. The rest of them stood in line waiting their turn to comfort her. I thought all the faces were probably the same to her. Her hands always touched their elbows and her tissue almost always fell on the floor.

I went up to my grandmother, kissed her cheek and walked away through the lobby, the glass doors, the parking lot, and into a cafeteria. As I ordered a pastelito and Materva, I saw some of the strangers from the funeral. They didn’t seem so strange anymore. Their faces and voices sounded familiar. The talk of old Cuba, the exile community, Miami, Hialeah, and my family comforted me. Those were things I had heard before and things my Abuelo used to say.

After spending the night at the funeral home, I woke to find the world still around me. Everyone was still talking and whispering comforts in the air like shooting the breeze over a game of dominos. No one slept. They probably feared they would miss out on one of my grandmother’s wails or so-and-so’s daughter or son and how they are still not married.

At that moment, the priest called everyone to pray the rosary. When the prayer was over, I walked outside with my parents, grandmother and brother to look for the limo. In the corner of the parking lot, the limo rested beneath the shade of one of those trees filled with moon-shaped green seeds. I remembered having block fights with those same seeds and that after one of the fights, I walked back home to find my grandparents waiting in the driveway with packages in their arms and smiles on their faces.

Abuelo said in broken English, “Who’s going to pick up the seeds?”

After the priest did what priests do and said what priests say, the cemetery workers rolled Abuelo’s casket to the rear of the mausoleum. My family and I were walking on a back street with a chain-link fence dividing the mausoleum and some kind of factory. The unkempt hedges sheltered some litter scattered close to the fence. The workers opened the side of the building and I caught a glimpse of where Abuelo was going to be. It looked like dusty concrete shelves. Objects were scattered like the litter next to the chain-link fence. I comforted myself by thinking it was better than being buried in just another hole in the ground with other people’s loved ones walking all over him. At least Abuelo had chosen this place for himself.

That night, I found myself sleeping next to my grandmother. It was dark and I realized that I really did not want to be next to her. I started to cry because I knew this is where I had to sleep tonight. My grandmother woke up and as she wiped the tears off my face, she told me, “No lo puedo creer. El gordo no esta aqui.”

She couldn’t believe her fat man was not there with her. I felt guilty for sleeping in his spot and for reminding her that she would not sleep with Abuelo again. As she reassured me that everything was going to be fine, I reached over and touched her face. As the wind and rain howled outside the window, I rubbed her dry face, rolled over and went to sleep.