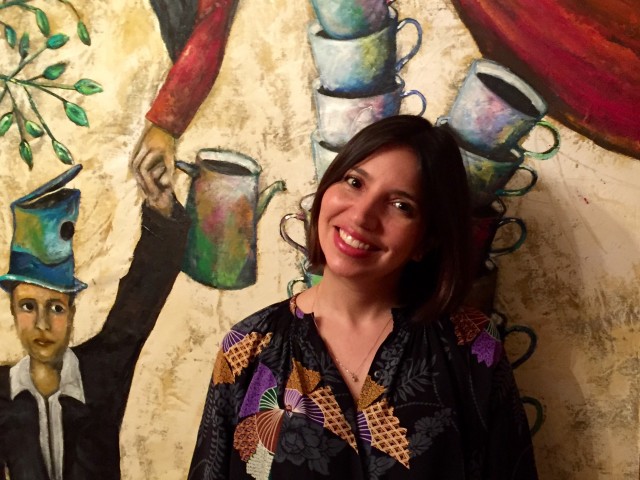 “Tey,” I said to my grandmother. “Look at those men wearing funny hats. … I want to go over there,” I excitedly pleaded.

“Please, take me over there, please, pretty please, I want to see what’s over there. Look at those cars with angels and stars. It is so pretty in there with all the lights. The tall skinny dancing palm trees adorned with sparkling lights. I want to see the Christmas tree, the stars and all the colorful magical lights.”

As I marveled, our bus arrived, and she would grab me by the hand and say, “Let’s get in, watch your step, let’s go home and get some rest.”

We were at this bus stop after my grandmother had worked another long day cleaning and cooking in one of Miami’s opulent homes. I went with her the days I had no school and my single mother worked, to that house with the courtyard, the tennis court, the pool and a giant poodle I loved to play with.

A week went by and here we were again at my favorite bus bench, waiting, and I was hoping this time Tey would take me over there, to “The Beautiful Place,” the magically adorned building. I may have insisted a little too much this time because I will never forget her reply.

“We cannot go over there, you cannot go in there, do you hear me, do you understand?” she shouted.

“Because over there is a place where only rich people can go; they are different than us.”

“Ese es un lugar para los TUFOSOS!” That is a place for the snobs.

My tearful eyes looked up at her hoping to understand what she meant by rich and TUFOSOS.

I loved being with my pretty grandmother. She was strict but she was also funny, kind and loving. She would tell me I was beautiful and covered my body and face with hugs and kisses.

I loved going inside the majestic homes and I daydreamed of the day I, too, would live in a fancy home, near or on the bay or beach. I took in my grandmother’s sad and tired eyes with no light, no hope, and no shine.

I insisted, “Please take me over there.” But here comes the bus. She said, “Let’s get in, watch your step, let’s go home and get some rest.”

The years have gone by, my grandmother is now up in the sky, and our world has changed so much that I am perplexed when I think of where my family comes from and all the possibilities for the future.

She was from the countryside of El Salvador, an orphan raised by aunts and uncles, and shuffled from home to home. I only learned her story later from my mother. My grandmother was only granted a second-grade education, and when she was 12 years old, she was hired to clean other people’s houses — the homes of the “tufosos.” It was in these homes of the “tufosos” that my grandmother became an exceptional cook and she mastered European cooking such as apple turnovers, yams, cheese tarts, and various types of stews and quiches. It was because of her gastronomic talent that she was later hired by an American diplomat who arranged for her to come to the United States, first to Boston but settling in my beloved Miami.

I was born in Miami, raised in the suburbs of North Miami, have loving and generous parents and stepparents. I was privileged to go to private school. I have a graduate degree and a well-established career. I now own a beautiful South Florida home, steps away from the beach and the bay.

The beautiful and enchanted place I have been talking about is a ritzy mall called Bal Harbour Shops. When I was a child, security guards and valet parkers wore pompous uniforms that now seem silly. Their hats with feathers, which I found so funny and enchanting as a child, resembled royal guards’ headdresses. The cars that were led by angels and stars are gaudy Rolls-Royce and Mercedes-Benz.

Now that I am grown, with privilege and abundance, every time I drive in my convertible sports car by Bal Harbour Shops, I get an uncomfortable feeling in the pit of my stomach. It is a fleeting feeling that goes away as soon as the light changes. I emphasize drive by because to this day, I have never been in there. Perhaps it is loyalty to my grandmamma, my own limited beliefs or my simple sensibilities. But to this day, “Not in there … not in there. …” I was told I cannot go over there.