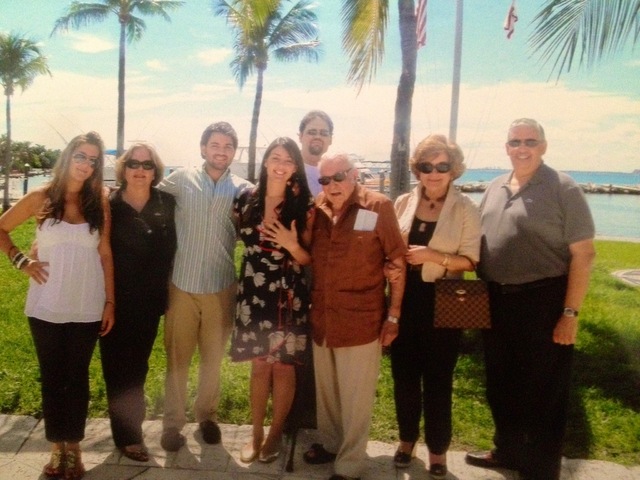 I remember vividly the days that led to my coming to Miami from Cuba. I was only 9 years old and turmoil, to say the least, was at hand. We were leaving my country for a short period of time. No one in my family thought it was forever. But even as a goodbye, it felt very sad.

My mother told me we would be staying in Miami for a long vacation, but I knew better. I overheard a conversation between my mother and father. They were afraid that Fidel Castro was installing a communist regime and that they would lose custody of the children to the state and the ability for us to practice our faith.

At that time, I couldn’t understand how they would make the ultimate sacrifice of leaving everything behind for my little brother and me. My father, who was in his 30s, already had a very successful job and future in an American company, and was finishing his studies at La Universidad de La Habana as an electrical engineer. My mother had a doctorate in philosophy, also from the same university. She was working as a teacher.

In those days, they seized all American businesses, and Mr. Skilton, my dad’s boss, and his family were expelled from the country. It was very sad for me. In their home, I had learned many American values and, because of the Skiltons, I celebrated Halloween and Thanksgiving. The regime asked my dad to help in the take-over of this business. My dad replied he wasn’t a thief. He had to leave the country before us.

On November 6, 1960, my mom, my 4-year-old brother Freddie, and I left Cuba for Miami. They put us in the “fish bowl,” a glass room where you stayed for hours, fearing your name would be called to be searched. From my seat, through the glass, I could see my grandparents trying to hold their tears so that we would not see them cry. What I didn’t know at that moment is that I would never see my paternal grandparents again. Still today, that sad memory touches my heart when I’m sitting in any enclosed glass room. I held my mother’s hand as the Pan American flight left Havana late that afternoon. People were crying; others feared the plane would go back to Cuba and screamed to the pilot not to return. You could hear the sobbing throughout the hour that the flight lasted.

The Miami International Airport was in the same place as it is today, but back then it was a small building with a terrace. We all came down the ladder and some kissed the ground. Before we went into U.S. Customs, in a moment of emotion, we sang the Cuban National Anthem. Then I saw my dad on the terrace waving at me, and I knew at that moment, that Cuba will always be in my soul but that Miami was home.

A few days later, I started school at Kensington Park Elementary. I knew very little English. My classmates were so friendly, but I only had one friend who could communicate with me, a Cuban boy named Ricky. We were the only two Cubans in the class. Children learn fast, and weeks later, I could say the words to “America the Beautiful” and the Pledge of Allegiance.

Every Saturday, at 8 in the morning, I had religious education classes at Sts. Peter and Paul Catholic Church. It was too early for me, but my father would make me go, regardless of my protests. After all, that was one of the main reasons we had left Cuba — so that we could practice our faith in freedom.

Soon, all my friends and their parents started arriving from Cuba. We lived in the northwest section of Miami, near the dog track. We went almost every day to the airport to give support to those in our same situation who were just arriving. Everyone was family and we helped each other.

Christmas was an emotional time. The year before, I had received so many gifts – twice — some from Santa Claus and others for Three Kings Day. But most important, my grandparents were there. This year, my young parents were alone and could not afford too much since my dad did not have a job. Days before Christmas, we received an invitation for a Christmas party for Cuban children at the Gesu Church in downtown. Included was a card for a special gift, and I still remember how nice it felt, and the excitement of a child who had nothing. It also meant a lot to my parents.

On Sundays, were outings to Miami Beach, Lincoln Road and the parks, and we would take picnics. Once, we tried to sneak into Parrot Jungle but were told you had to be 5 to go in free. So the picnic was outside.

Months later, we had to leave and go to Puerto Rico to find a job for my dad. In all the years we lived in Puerto Rico, we came to Miami every year. The Magic City is the place where most Cubans want to be – for friends and family, Cuban food and pastelitos. But the love of America, the generosity of its people, and the opportunities given to us, made us Cuban Americans.

More than 40 years ago, in 1971, a small restaurant called Versailles came to be. Every time we arrived from Puerto Rico, my dad would take us from the airport to Versailles. Later, when I moved back, my friends and I would always go after the parties for café con leche. I sat there with my husband, then my boyfriend, for long conversations. I pushed my babies’ carriages through the tables, and when my children were teenagers, I took them for lunch and advice. Today, Versailles is the first place to stop when they come from college or from a long trip. Versailles is part of our Cuban culture in Miami.

In the ‘70s, my parents bought an apartment in Key Biscayne, which we call El Cayo. It was the place where I met my husband. We married 35 years ago and have three children. Today, I live in the Grove, and see bikers every day riding the same trails I used to ride to Matheson Hammock. And still my Cuban-American soul finds Miami is my home.