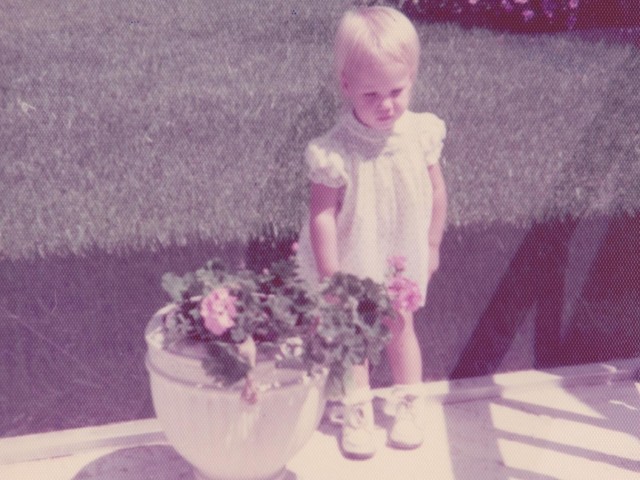 My family moved to Kendall in the fall of 1975. Both from Ohio, my parents settled here with a pioneer spirit, building a home together in an old pine tree forest at a time when the area felt like it was at the edge of civilization.

A reserve filled with Dade-County pine trees now surrounded them— these tall, skinny trees are covered with red and brown bark plated like paper scales and have tufts of evergreen needles that flourish at the top.

Early settlers built their homes from these pines because they believed them to be strong and capable of withstanding hurricane winds, in addition to being termite resistant due to their high sap content. My parents felt that “high pines” was desirable as it was supposed to fare better than most areas from flooding if Miami was ever struck by a major storm.

They bought the house from an Irish builder on a handshake, and opted for an English Tudor style design. My dad installed his own solar heating system for the pool, circulating the water through black piping on the roof, which was considered innovative for its time and featured in the Miami Herald Tropic section.

The warm tropical climate lured a succession of friends to visit from up north, so having a heated swimming pool was an exotic addition. The first order of business was to ensure that I could swim, so I was enrolled in “water baby” classes—I learned to swim before I knew how to walk.

I attended Leewood Elementary and would walk to school every day. My mother would accompany me to and fro, and when I got a little older I was permitted to ride my bicycle. She would quietly trail behind me until she was confident of my skill and I was then allowed to commute to school on my own.

The area was ripe for development with sidewalks and small homes starting to appear, yet the moment retained so much possibility and opportunity. The pine tree lots were expansive and the generous space predicated the sprawl of urban growth. It was the emptiness that was full. This was the era of magical realism, where childhood was still immersed in innocence and dreams, the excavations of invented worlds abound.

When not in school, I would spend endless days venturing out into woods with neighborhood kids, finding a clearing for forts which we would construct from discarded plywood sheets and old particle board cabinetry, making ladders of 2x4s, furnishing the hide outs with contractor bucket seats and holding court.

Traversing the soft needle carpet beneath my feet, my footsteps padded and dowsed yellow with pollen and sticky sap speckled every surface I made contact with. The edge of the woods was populated with towering cane sugar plants that had downy razor sharp leaves, leaving a stream of paper cuts on my legs in the wake of a mad dash of tag and game playing.

What kind of future could I dream about? I would always lose myself in thought, my head full of possibility and reveling in freedom — definitely a sign of my artistic temperament. Rays falling fast across the sky designating it was time I head home. My mom would be anticipating our return, hair matted hot with sun and retaining the wild airs of adventure. I remember the light had these mysterious ways of southern light, gathering itself together and suddenly dissipate.

The passage of time brought with it inevitable changes. This was a rapidly shifting suburban environment and development was encroaching, and with it came more trouble, incidents of crime were reported, and these occurrences indicated the transformation.

Someone tried to coax a young child into their car after school, a sign of times to come. I negotiated my way into middle school, and the internet became more prevalent as outdoor activities lost their appeal. My parents sold their green Karman Ghia because it didn’t have seat belts. Things were forced to change, to become something new and something different.

The early 80s also brought turbulent times — the Mariel boatlift with its Cuban mass exodus and heartache, the drug trafficking, and the abduction of Adam Walsh forever scarred the landscape of our childhood. Miami had its edge, Miami Vice and South Beach and its lively pursuits of pleasure and the pulse of constant culture, but this atmosphere was not for me. I left Miami to attend college up north, with the assumption that I would not return for a long time.

I was home with my family when Hurricane Andrew hit in 1992, and our house was one of the only ones in the area that withstood its powerful and destructive winds. That Irish builder had designed the house so the doors would swing out- not in, which would prevent the interior corridors from being blown through.

When we woke up the next morning after Andrew, our home was one that was not emptied of its contents. The majestic pine tree forest, or what was left of it after development, was decimated. Those treasured moments of solitude in the woods, and how it provided me with a childhood full of discovery and revelation still remains firmly anchored in my mind.