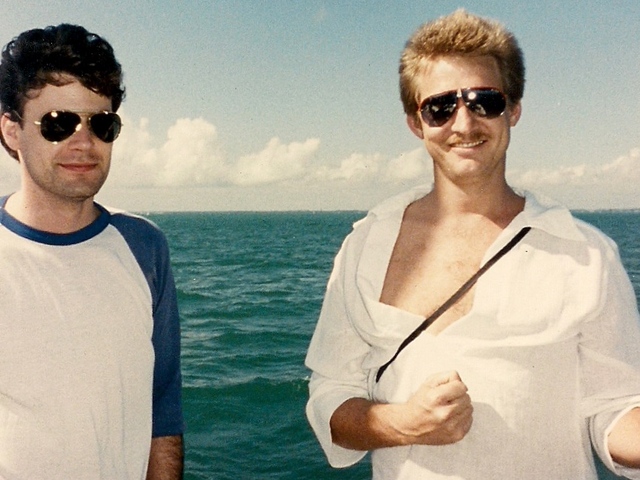 Miami and Dade County in the late 1970s and early 1980s had a different atmosphere and environment than they have today.

Truth be told, I was a vastly different person then, too. In those days I was a full-time undergraduate student (living off-campus) at Barry College (which became a university in November 1981) before it grew west of North Miami Avenue. Bob’s Subs, with the best cheese steaks and onion rings around (and, conveniently enough, cold beer), was still across the street from Barry then, at Northeast 115th Street and 2nd Avenue.

I had neither a car nor a phone and was all but penniless — a thrift-store denizen –so I worked part-time as a bartender, a cook and/or a waiter in just about every restaurant around: Lum’s, Pizza Hut, Prime Steak House, The Round Table, Red Lobster, Watsons Family Restaurant, The Jockey Club, Miami Shores Country Club. Most of those establishments have been renamed, changed, or simply closed.

Next to Lum’s (near Northeast 125th Street and West Dixie Highway) was the Pieces of Eight Lounge, my favorite local bar. It, too, has changed, appropriately enough, into a family planning clinic. Around the corner stood Grand Union, an all-night supermarket, where a broke college student, up all night doing homework, could walk at 3:00 a.m., simply for someplace to go.

Without a car but still a “carouser,” I walked everywhere at all hours: to and from work, school, or the Trailways bus station near Northeast 163rd Street and Biscayne Boulevard. I enjoyed walking. Once I walked home from Coral Gables, and thrice from Ft. Lauderdale Beach. (I still enjoy walking but now own a vehicle.)

My fondest memories of Miami and Dade County are of those times I spent walking. Most often it was late at night. The streets were deserted. The sea breeze, without the sun’s heat, would have died down, and stillness prevailed. The trees, many draped with Spanish moss, were like statues.

As powerful and pervasive as the city seemed during the day — people bustling about, noise from traffic — when the late-night hours came and I’d walk through North Miami and north Dade neighborhoods, I’d get an overwhelming sense of the Everglades, the swamp, residing patiently beneath the brassy urban development’s then deceptively thin veneer. The swamp was perceptible. It seemed like a living organism, an abundantly powerful life force, nonplussed by the concrete and the humanity covering it, casually waiting to reclaim its own.

It’s clear that I never really bonded with the city itself, but rather with the land on which the city stood, and the natural environment that surrounded and permeated the land. It was all so abundantly alive and present, regardless of the city that had been built on it.

It seemed that nothing that humanity could do — no roadways, no stone buildings, no canals slashed through the land — could suppress the swamp that, if not constantly held back, would quickly and inexorably break through and devour all that humanity had built, in a lot less time than humanity had taken to build it.

Yet it was so peaceful. For all of its latent power and authority, the swamp didn’t seem threatening — not like the ocean which, with its hypnotically immense majesty, seemed liable to snatch the city from existence with one convulsion. No, the swamp seemed to have a patient, harmonic personality. It was massive, yet finely balanced: an unfathomably complex mathematical equation, trillions of factors in a constant state of flux and yet perpetually attuned with the organic whole.

That is all gone, of course. This land is no longer “mine,” and I’m no longer this land’s. The city, with its tall mountains and expansive plateaus of concrete, steel and glass, seems to have dug into the swamp’s heart with quests for commerce and a continually burgeoning population, all of which seem to have erased the swamp’s former beauty. Given the city of Miami’s prominence as the Caribbean basin’s commercial capital, the city will likely only grow.

But to this day–nigh on 35 years later–I’m still spellbound, not by the city of Miami, but by my memories of the land on which it’s built. Since I first moved to this town in 1979–more accurately, since I first moved to southeastern Florida in 1970–a lot has changed, both about the town and about me. I’ve traveled across the seas and around the globe, and I’ve lived all over the country. I’m older–more emphatically, no longer young–and tired, and not so innocent anymore. Similarly, the city of Miami and Dade County have grown huge and become much more crowded: pervasive, overpowering, dominating the land.

But when I see the pink and white cumulonimbus clouds billowing skyward in the east in the morning, and the seemingly endless saw grass plain stretched out to the horizon, and the scrawny Florida pines silhouetted against the red sky at sunset; when I walk the old, North Miami neighborhoods, feel the stillness–quiet, finally, in the wee hours–and recall, rather than still hear, the swamp quietly whispering behind it; when I smell that damp smell that once seemed to hold and to affirm everything, my fondest memories come rushing back, and I bask in the imagery of 35 years ago, when the land beneath the city and the atmosphere surrounding the city still sweetly breathed the promise held ever true in my heart.