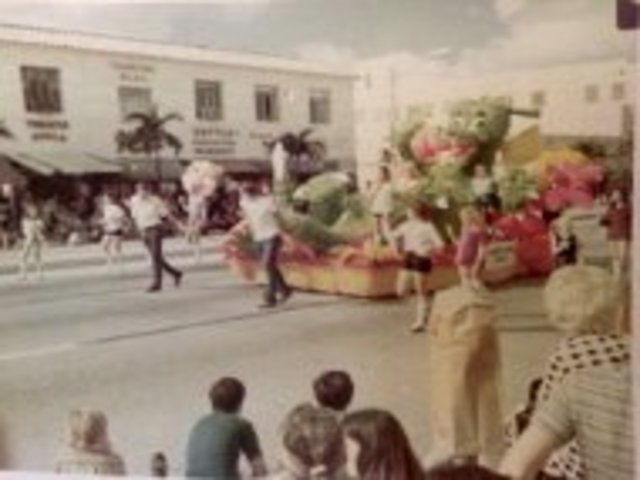 I do not know when I first heard that word, but it pretty much summarizes how I feel about growing up in Miami during the 1970s and ‘80s.

To me Spanglish is not just a mixing of English and Spanish; it is the mixing of two diverse cultures. It is a culture unto itself.

In the 1970s, I lived on 13th Street, five blocks away from Calle Ocho. It was a working class neighborhood — mostly lower-income families living in two-bedroom duplexes. Every morning, I walked to Auburndale Elementary, past Woodlawn Cemetery, La Lechonera, and Velvet Cream Doughnuts. In other parts of the country, I would have played with kids named Mary or John, but in Miami, my playmates had names like Maria and Juan.

At the end of the day, when we were called in for dinner, I would eat beef stew, while my friends had carne con papas. “Ay Mami” and “Oh Mom” translated to the same desire to stay outside ” cinco minutos mas,” or five minutes more.

My mom picked up eggs and milk from Farm Stores; my friend’s mom called it La Vaquita. Because it was a working class neighborhood, both parents worked in many homes. Those of us who came home to empty houses were welcomed into homes with an abuela present, who made sure you got an afternoon snack, did your homework and stayed off the roof.

I took cultural differences for granted. Spanglish was how we understood one another. It blurred the lines between languages and gave us common ground so we could get on with the business of being kids.

Summers are long when you are a child, but in Miami summer lasts most of the year. I spent my weekends with the neighbor’s grandchildren exploring Bill Baggs Cape Florida State Park, also known as El Farito because of the historic lighthouse. We searched for hermit crabs and sea slugs. We were sunscreen-free with sand baked on to our bodies. We climbed onto picnic tables, ate sandwiches wrapped in foil, and drank water out of a thermos before heading back home to play a few more hours outside.

Other times, I spent weekends with a dear friend who had moved on from our neighborhood. Those Saturdays consisted of all day in the pool and backyard barbecues. We did this all year, never thinking that in September and October kids elsewhere were wearing sweaters. For kids growing up in Miami, shorts and T-shirts were a way of life.

If my brother had extra pocket money he hoisted me on the back of his bicycle, and took me to the Machine Shop to play pinball, or sometimes to the Coliseum, a gorgeous old bowling alley off 37th Avenue. The bowling alley changed over the years, and eventually was torn down and a Publix now occupies the site.

We sneaked into the Gables movie theater on more than one occasion. If we were lucky and my mom had time off, she would take us to the Venetian Pool in Coral Gables. I eventually was married there in my 20s.

In the 1980s, Central and South Americans and Haitians became part of the Miami landscape, bringing a new dimension of diversity to a city that already had many identities. The city and its people became media targets.

Miami was the poster child for violence and racial tension. I remember watching Channel 10 news and the broadcasters talked about the violence that was taking place in the streets. I didn’t understand what was going on back then.

Talk of cocaine cowboys and images from the television show “Miami Vice” began to show up everywhere. I did not know this version of Miami. My version of growing up was more like the PBS show “¿ Qué Pasa, U.S.A?” I did not grow up surrounded by violence, I was not afraid to play outside. The only time I ever heard gunshots was when some of the men in the neighborhood shot off their rifles to ring in the New Year.

We moved for a year to Birmingham, AL. It was the first time I experienced the change of seasons; We had a bigger house, I lived in a better neighborhood, and I went to a good school. But I felt like I was missing something. It felt strange to be surrounded by Marys and Johns. It felt strange not to smell café Cubano and sazon criollo wafting from the neighbor’s house in the morning and evening. It felt weird not to communicate in Spanglish.

We moved back after only a year, and the missing pieces fell back into place. I caught up with my old friends and life resumed its normal Spanglish rhythm.

To this day, even though I understand Spanish completely, I speak Spanglish. I have been lucky to travel as an adult. I love the hospitality of the Deep South, the romance of Paris and the hustle and bustle of New York. However, Miami is my heart and its Spanglish culture will always be my home.