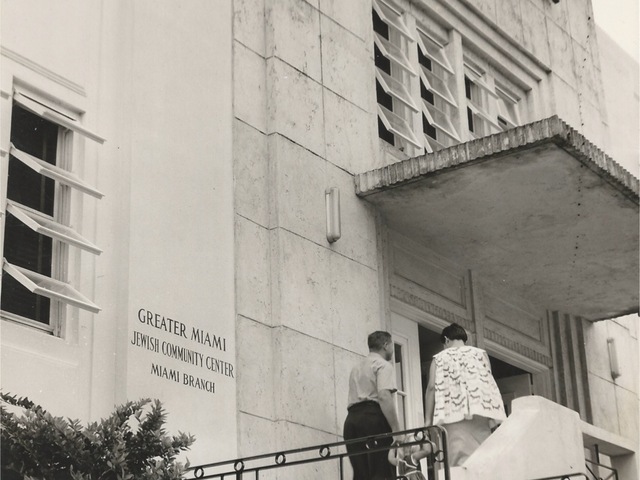 Yes, I am a Miami native, born in 1951 at St. Francis Hospital on Miami Beach. My dad was in dental school at St. Louis University and my parents came home so I would be born in Miami.

My dad Jerry Denker a native of Brooklyn, N.Y., attended Miami Beach High and played football there in the early 1940s. My grandparents, Julia and Harry Mahler, had a dry cleaning store, DuBarry’s, on Fifth Street.

After the war, my dad met my mom (Gloria, from Woodbridge, N.J.) while she was vacationing on Miami Beach near the store.

After my dad finished dental school, we moved back to Miami and lived in a small duplex on Southwest Seventh Street in what is now known as Little Havana.

I attended the Miami Jewish Community Center (YMHA-YWHA), also located in the neighborhood, for kindergarten.

In 1955, we moved to a new housing development called Westchester. Everyone wondered why we were moving to “nowhere” in the Everglades.

Actually, it was in the area of Coral Way between Southwest 78th and 87th Avenues. There were no expressways and the neighborhood at first was barren, with no trees or landscaping. My father set up his dental practice on Bird Road and I attended Everglades Elementary School.

In 1957, when I was 7, my sister, Marti, was born at Jackson Memorial Hospital. Little did I know that as an adult, I would work at Jackson as a nurse for more than 38 years.

Westchester was a great neighborhood for growing up — playing ball games and riding bikes on the quiet streets, knowing most everyone in the community.

My dad, a proud Gator from the University of Florida, influenced my sister and me in many ways.

Dad was an all-time sports lover and we spent much time in the Orange Bowl, cheering on the University of Miami Hurricanes, claiming season tickets when the Dolphins arrived in Miami, attending the Golden Gloves boxing in Dinner Key, and any other sporting event that came to town.

I have many remembrances of the “sleepy” town of Miami where we did not lock our homes or cars. We picked strawberries and tomatoes blocks from our home.

We walked to the shopping center in Westchester and bought 45 RPM records at Zayre’s. I spent summers hanging out with friends and club members at the Westbrook Country Club (Southwest Eighth Street), later to become the “Y” where my Coral Park swim team practiced. My family liked to go out to eat and some of our favorites were the Red Diamond on Lejeune, the Pub, and Glorified Deli on Coral Way.

My grandparents lived on Miami Beach, and it was always a treat to sleep over and go to Flamingo Park and the beach.

I remember the long ride to the beach weaving in and out of streets through downtown, before the expressways. My girlfriends and I would sometimes take the bus to South Beach and hang out by the old dog track.

If it wasn’t the beach, we would ride the bus to Miracle Mile, shop at Young Sophisticates, eat lunch at Jahn’s Ice Cream Parlor and see a movie at the Miracle Theatre.

My mom, very dedicated, would drive us back and forth to swimming or tennis practice, sometimes more than twice a day. We would spend weekends at swimming meets anywhere from West Palm Beach to Miami.

To this day, I continue to swim and work out with groups at José Martí Park. I have great friends from my age-group swimmers and the Masters swimming community of South Florida.

Needless to say, I attended the University of Florida and also became a loyal Gator and a nurse practitioner. I spent a great 38 years at Jackson Memorial Hospital in many roles, caring for the people of Miami-Dade County.

I continue to reside in Miami in a building with a great view of the beautiful bay and downtown skyline, not far from the little duplex that still stands on Southwest Seventh Street.