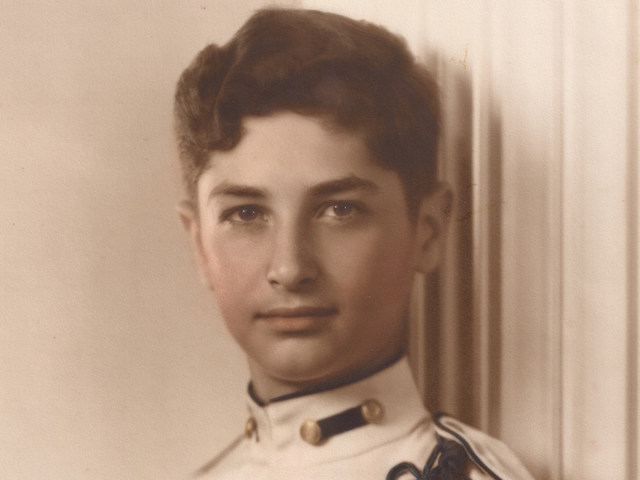 I was born in a wood frame building on Miami Beach in 1924.

My parents were Greeks, born in Turkey. My father’s parents raised silkworms that were sold to the local factories in Bursa. A wealthy Turkish merchant in the silkworm industry who did business with my grandparents, made frequent business trips to the United States. My father would listen in awe as he related stories about a tropical paradise there called Miami.

He said it was located directly on the ocean where cool breezes prevailed all year long, people went swimming every day, it never got cold and the sun shone every day. The merchant also said no one ever went hungry because of all the fruit-bearing trees in the wild and that there are even trees for children called kumquats with oranges the size of a thumb. A glass of water was not necessary to quench a thirst because a large nut called coconut has water in it.

Picture in your mind someone never having picked a nut larger than an almond from a tree being told that in America they was a nut the size of your head with a shell inside that has the pulp of fifty almonds and holds a glass of water. Well, that was all my father had to hear. He vowed then and there we would someday live in that paradise.

After the Balkan countries declared war on Turkey in 1912, the family went to Greece, and in 1915 my grandfather left for America. Working on the railroad laying track, he settled in Cincinnati and sent for the rest of his family. My father begged him all along about going to Miami and he finally arrived here in February 1920.

It was everything he had been told, and he convinced the whole family to move here. They bought a property on West Flagler Street with a restaurant, rooming house, and a hat-blocking and shoe-shine shop. They prospered, but it wasn’t long before my grandfather noticed his two sons were running around with American girls. So he went back to Turkey and returned with two neighborhood girls. The double-wedding took place in 1923 at the Episcopal churchnear the Venetian Causeway.

That same year, my father went to work helping to build the Nautilus Hotel. Looking for a less back-breaking job, in 1924, he drove a jitney to and from downtown and in 1928, he helped with the opening of a market on Washington Avenue.

Having led a very sheltered life with only Greek and Turkish spoken in the house, I was enrolled in the first grade. When told my name was Aristotle, the teacher said, “I wouldn’t name my dog that.” She asked how it was pronounced in Greek. Because “Ari” sounded like “Harry,” that became my name through high school.

We endured the 1928 hurricane, but not the 1929 stock market crash. The Depression years were trying, but we endured. By the end of 1933, my parents had put enough aside to buy a restaurant on Ocean Drive. My father and I fished the jetties every morning, he to catch big fish and I to gather snails and big crawfish for the store. He caught mostly snook and barracuda, which was on the menu as snapper, while I caught Florida crawfish listed as Maine lobster, and snails listed as French escargot. We always sold out because my mother was a great cook.

I once crawled under the fence at the government field and picked a choice watermelon for our store. A police officer saw me walking off with it and offered me a ride. It wasn’t to my house, as I expected, but to the police station. He sat me on the curb, cut it into four pieces, told me to eat all of it, and said he didn’t want to see any red when finished. When I asked if I could use the restroom, I was told it was for police only. I got the picture and hurried home.

By 1935, my parents had put enough aside to buy the lot next to where I was born for $2,500. The following, year they built our house for $5,000. When finished with building, we busied ourselves landscaping it to be the best in the neighborhood. My job was following the horse-drawn ice wagon down the alleys, discreetly gathering horse manure to fertilize our plants. You can bet it was done discreetly.

I made money the hard way: I worked for it. I sold peanuts for an old man named Doc to bathers on the beach for five cents a bag, keeping a penny for myself. Occasionally, when given a dime, I would give it to Doc. My reward was a bag of peanuts to take home.

I would also go to the Miami Beach golf course and dive into the canal to retrieve golf balls for a nickel. I would get in free at the plaza theater by picking up chewing gum wrappers and cigarette butts from around the building. I did the same for Occasionally, I would buy shrimp from a fish market on 63rd Street to fish. When I told the owner it was my mother’s birthday and that I was going to catch a big fish for her, he gave me 10 shrimps for a nickel.

At a boat rental concession near Biscayne Bay, I was allowed to use a 10-foot sailing moth in exchange for cleaning out all of the returning fishing boats. That little moth took me all over Biscayne Bay, from the spoils banks to the ragged keys and Fisher Island.

Later, so as not to be drafted, I joined the Navy, was assigned to the aircraft carrier U.S.S. Yorktown and served the remainder of WWII in the Pacific. After being honorably discharged, I went to work for the city of Miami Beach, in the engineering department. I started as a rod man on the survey crew and retired 45 years later as assistant public works director.

The highlight of my life is my marriage to my lovely wife Artemis, who has given me 57 beautiful years and two beautiful daughters, Adrian Artemis and Andrea Aphrodite. They in turn have given us two exceptional sons-in-law, Robert Sherman and Javier Holtz, who have each given us three exceptional grandchildren: Michael, Andy and Bryan; Matthew, Nicole and Andrew.

Since I retired, the population of Miami Beach has exploded, traffic has become unbearable, and parking next to impossible. I close my eyes and reminisce about the good old days in old South Beach. As a child.