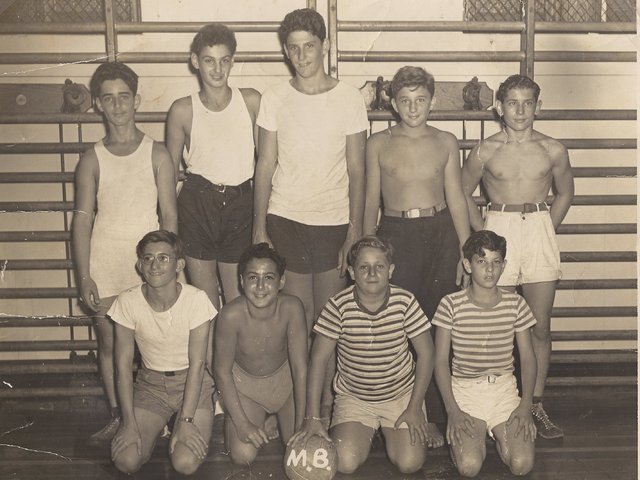 I was born in 1932 at Jackson Memorial Hospital in Miami. After my first three years at Grandma Rose Fields’ hotel, across from the prestigious DuPont Building, we moved to Miami Beach.

My recollections of those first three years was of me pretending to direct traffic from the arms of a kindly policeman at the corner of Northeast First Street and First Avenue, watching uniformed-dressed, Gesu-parish schoolgirls playing on the cement schoolyard on Second Street, occasional trips up the Miami River to a Seminole village, and watching Pan Am clipper ships land at their seaplane base in Coconut Grove.

As a young teenager, I returned to the hotel to be an assistant desk clerk and telephone operator. It was my habit to treat myself to a two-inch thick bologna sandwich with yellow mustard on rye bread at Albert Deli. It was next to Wilson’s garage, directly across the street from the hotel. Sometimes I walked a block to Royal Castle and had two or three burgers and a birch beer.

Surely some sensory experiences are never forgotten. I can recall the smell of the grilled onions and pickle on those soft tasty buns that sandwiched tiny RC burgers. In 1948, when I was 16, my parents Larry and Sophie Gilbert opened the Town Restaurant on part of the footprint of the New Pioneer Hotel.

“The Town” was to many professional and business people the place to go for breakfast, lunch or dinner. Many of its customers never had to decide what to order. The staff of waitresses knew most customers’ favorite dish for each day and the customers enjoyed being habitually recognized. It was the habit of many families to meet and eat at the Town before going to the Olympia theater for an evening of entertainment.

Miami Beach was the heart of my life. I went from kindergarten through sixth grade at Central Beach Elementary. Officer Bob Loveland worked the traffic light at 14th Street and Washington Avenue to safely cross us kids. The stanchion-pipe housing that held the electrical elements of that device remained standing for decades on the northwest corner of that busy intersection. As the years passed, it was my habit to drive by it and point it out when I took my children and grandchildren on my patented “heritage” tour of the city of my youth.

At Central Beach, Principal Katie Dean set the stage for us to understand the value of being considerate and compliant. Then came WWII. I was 9. We all did what we could to help in the domestic war activities. Shared efforts included air-raid drills and using coupons to buy rationed butter, meat, sugar and eggs.

We collected metallic objects to make munitions. From 1939 until the war started in December of 1941, my family operated the 14th Street Beach Cafeteria next to Sol Goldstrom’s Washington Avenue bakery. The government commandeered it for a military mess hall along with Hoffman’s Cafeteria on Española Way and Dubrow’s Cafeteria on Lincoln Road.

During the war years, my family operated a drugstore and lunch counter on Collins Avenue. Essentially all the customers were recruits. They were housed at hotels along the beach. When I saw them at that time I thought they were so manly; as I think about them now, they were little more than young boys.

As kids on the beaches, we watched blimps patrol the coast for Nazi submarines. We gathered cans of provisions washed ashore from U-Boat actions not far out. We developed unqualified patriotism that has remained my generation’s credo.

Scouting became a central interest to many friends and me when we turned 12. Troop No. 35 met at the American Legion Hall on 18th Street and Alton Road. Overnight hikes to what is now known as Watson Island were memorable events. So were the weekend camp outs at Greynolds Park. Scouting events took us to the old Deauville hotel and Venetian pools for swim competitions.

Life was made full with school programs at Ida Fisher Junior High and Miami Beach High school, semi-organized sports at Flamingo Park, and socializing at 14th Street Beach. Our Flamingo Park teams traveled to Shenandoah Park and to Little River to play.

My four years at Miami Beach High School was the most joyous time of my span of 25 formal educational years. Academically, it prepared me well for higher education. But it was with our teammates in interscholastic sport competition against the five other public high schools in Miami, and many others in the state, that proved to be the glue that bound us closely and from which we remain friends in our later years.

Beach High opened in 1926 on 14th Street and Drexel Avenue. I was a Beach High “Typhoon.” Our colors were black and gold. That school remained there for 34 years until 1960. It was then moved to its current location; its teams became known as the “Hi Tides.” From its opening in 1960 until now, 53 years later, people refer to the present school as the “new” MBHS (Hi Tides) with colors of silver and scarlet. Those same people refer to its predecessor as the “old school.” I think I know why. It’s just a habit.