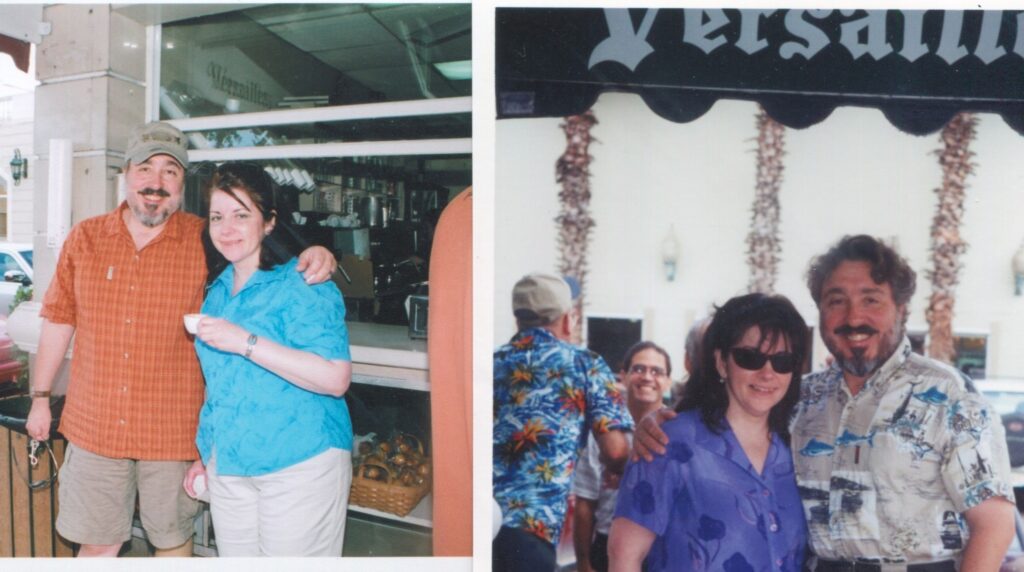 Versailles Restaurant has been the epicenter of the Cuban exile community in South Florida for 50 years, but on a personal level it was also a very significant place for my late husband’s career as a sculptor. His name was Marc Andries Smit and his first commercial piece was purchased by Mr. Felipe Valls, Sr. in 1995. Marc, sculpture in hand, drawing from his successful business experience, made a cold sales call to Mr. Valls, and sold him three copies of the Jose Marti 1853 – 1995 Centennial Commemorative Plaque limited edition. The others were gifts for two of Mr. Valls friends, and prominent Cuban exile leaders.

For the next 22 years until he passed in 2017, many of Marc’s creations drew from the energy of the people and the stories that he heard at the ventanita and later the bakery. Pieces like Guarapo, Tina Jones, Diaspora – Postcards from Cuba, El Emperador en su Ropa Vieja and a few others were inspired by the joy, the humor as well as the underlying pain of the Cuban exiles in Versailles.

Versailles’ vibe gave Marc an opportunity to develop his Cuban side, since he was half Dutch and lived in the US since the age of six. He was able to network with many important people that soon became his clients. He enjoyed the admiration of the older patriots that longed for their lost homeland, and saw a glimmer of hope when a younger man spoke to them with interest, respect and that sense of humor from his Cuban side. At the same time these men and women taught him about the land of his birth, its beauty and its vibrancy. Versailles also gave him the opportunity to speak against oppression to the ever present TV cameras and the multitude of International tourists. He took pride in dispersing the right message in clear and concise sound bites in both English and Spanish to anyone that listened.

We also had many good conversations with friends and people that we had never met. Marc entertained them with his ability to balance coins on their edge and create mini-installations with cups and bills while waiting for the “café en taza y bajo de azucar.” But the most joyful visit was on the early hours of November 26, 2016, when we both donned our *uck *idel T-shirts that Marc had designed years earlier in anticipation of the death of “el innombrable” and drove to Versailles where the celebration was in full swing. With congas and timbales playing and people dancing on Calle Ocho, we managed to get a table inside and enjoy a medianoche in a restaurant filled with smiling faces. Among them was Mr. Valls surrounded by his family at a table near the original part of his restaurant. Marc went up to say hello and to thank him for creating the spot to celebrate in freedom.

Thank you Versailles Restaurant for all that you have offered to the Cuban Diaspora.