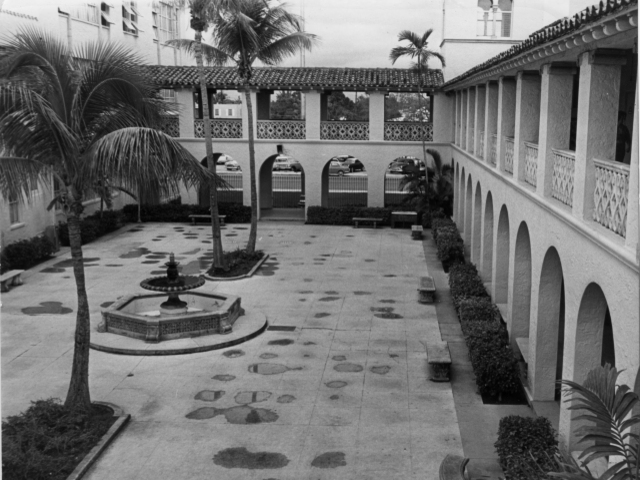 I grew up in Miami. In 1964 my family relocated to Miami from Rhode Island, at the time I was six years old. The three of us, my mother, my sister, and my younger brother lived in a small house in the Roads section of Miami.

One of the first things I remember is the aroma of the mango trees. I had never been exposed to the abundance of tropical fruit trees or beaches with palm trees. The Miami architecture compared to nothing else. The school I had left in Rhode Island was brand new, very square, and very modern. The Miami schools had a Spanish style, and homes had red barrel tile roofs.

When I started second grade at Coral Way Elementary I was thrust in a program referred to as an “experiment” with bilingual schooling. I had half a day in English and half a day in Spanish. I had never been exposed to anything like it, and I loved it. I stayed in the program until middle school.

I had neighbors that were American, Jewish or Cuban. Rabbi Landau lived on the next block, and my best friends were Cuban refugees who had relocated to Miami Fidel Castro had taken over their home in Cuba and turned it into a military school for boys.

The Martinez/Herrera family had opened an auto parts store on 8th street. After school I would walk with my friends to their store. We went next door to the lunch counter and had Cuban bread with melted butter and a Coke.

Their family had their grandparents, cousins, aunts, and uncles all living in the same large house. Each person had a different duty and they ran their home so efficiently. My friends showed me a world filled with Cuban culture, palomilla, Cuban coffee; the excitement of their Quinceañera and the special bond between fathers and daughters. Through the Gouz family I learned about Bar Mitzvahs, Hanukkah, exposure to Jewish foods and the Temple Beth David.

My high school years were spent at Miami Senior High School. Now a historic landmark, my alma mater was built in 1928. The detail and architecture compare to no other.

Like Heidi Gouz and my sister before me, I joined the Miami Senior High School Band and became a Flagette. I twirled a flag and my life was filled with football games each week.

Not to be played at any an old football field, not for us, we performed in the Orange Bowl – with Astro-Turf back then. Our proms were not held in the gym – no, our proms were held at the Fontainebleau or the Eden Roc on South Beach.

New Year’s Eve always meant the Orange Bowl Parade, with Brickell Avenue painted white in preparation. We lined up at the DuPont Plaza hours in advance. Chuck Zink hosted as we marched through Downtown Miami. I loved being on TV.

Growing up in Miami gave my life such diversity and exposure to multiple cultures.

Miami enriched my life in a way that could never have been found anywhere else.