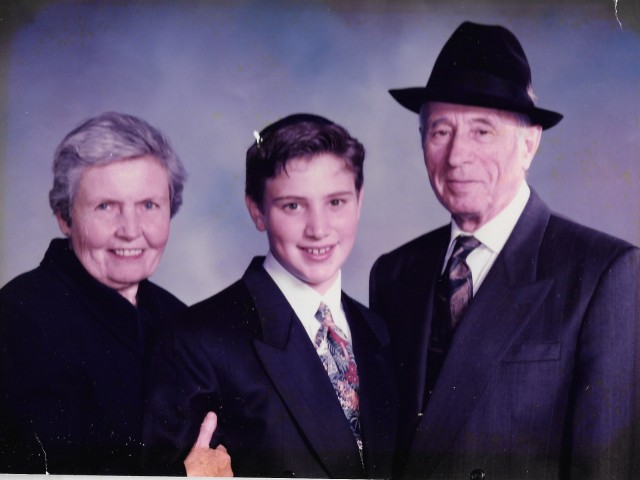 It was 1991, and my father-in-law, David Berg, was still a hard-working kosher butcher in Hillcrest, Queens. My mother-in-law, Elka Berg, worked tirelessly beside him, though they were 79 and 69, respectively.

That winter, my husband, Allen, decided to buy them tickets to Miami Beach and book them into a suite at the Saxony, complete with a kitchen so Mom could continue to cook the simple, healthy foods Dad, who had a high sugar count, was allowed on his limited diet.

“Use them or lose them,” Allen told my in-laws. “The tickets are paid for and there are no refunds.” So off to Miami Beach flew David and Elka Berg; it was the first winter vacation they enjoyed since their arrival in America in 1949.

After a week, we got a phone call.

“Fine,” said Dad. “The sun is shining, the weather is a balmy 80 degrees. We’re walking on the boardwalk. In fact, we bought an apartment down here.”

Now, my in-laws are wonderful people. In fact, Dad started his own successful butcher business from nothing when they arrived in New York. But they’d never even considered buying any real estate in all the years they rented store space and their apartment on the lower East Side. So this was a startling development indeed.

My in-laws came home that spring, worked in the store all week and spent weekends in the summer in a bungalow in the Catskills, just the way they had for over 30 years.

Winter rolled around and off they went to sunny Miami. By this time, Allen had to see just what they purchased. So en route home from a trade show in Atlanta, he detoured to Miami Beach to surprise his parents. Unfortunately, it turned out that Allen was the one who was surprised. And not so pleasantly.

The apartment Mom and Dad bought was on the top floor of a three-story low-rise building on the corner of 41st Street and Collins Avenue – the busiest intersection in Miami Beach. Not only could you hardly hear yourself talk over the constant noise of the traffic below, but there were buckets all over the place collecting the water from the leaks on the roof. Oy! Dad was nursing his bout of walking pneumonia with tea and honey, and Mom was continually emptying the buckets filled with rainwater.

After getting Dad to the doctor to cure his pneumonia and trying to convince his parents to move, Allen came back to New York with promises that the roof was going to be fixed by next winter and all would be well. Ha!

After another spring, another summer, and another fall, winter arrived and my in-laws departed.

“How’s it going?” asked Allen during his daily calls to his folks.

But Allen didn’t live with his parents for 21 years without learning anything. And there was another trade show in Atlanta. Perfect time to check things out.

At that point, my husband decided, enough is enough. Tower 41 loomed invitingly across the bridge and Allen was convinced his parents would enjoy spending their winters there.

Somebody up there likes us. Allen found an apartment in Tower 41 on the 15th floor overlooking the pool, Indian Creek and the ocean. Perfect!

Now, how to convince my in-laws to move there? After all, Dad was a very proud man who would never accept his son’s financial help. So Allen told Dad that he wanted the apartment as an investment and they should use it during the winter until 120 years, with G-d’s help.

”Can you afford the maintenance?” asked Allen.

“Yes. No problem,” he replied.

“Good. When you’re in the elevator no one knows how much money is in your pocket. Please, you pay the maintenance and I’ll have a good investment.”

And that’s exactly what we did.

My in-laws enjoyed 12 wonderful winters in Miami Beach in a clean, safe building. We had peace of mind knowing they were doing well every winter and welcomed them back to New York every spring thrilled that they both looked so good and were thriving in Miami Beach.

In October 2004, my father-in-law passed away and Mom started to fade. That summer, while Mom was in New York, we renovated the kitchen and two bathrooms, hoping she’d enjoy the newly refurbished apartment. But we were deluding ourselves. Mom was lost without Dad to lean on and that winter was the last one she spent in Florida. From then on, Mom stayed in New York, fading in front of our eyes year by year for 10 years.

For a few years, we rented the apartment for the winter months. Finally, just a few years ago, we decided to use it a week here, a week there. Every time we came down, we’d renovate it a little more, refurbish some of the furniture and purchase new pieces. We kept the 60-year-old needlepoint picture Mom made in the bungalow colony all those summers ago, reupholstered the dining room chairs and replaced the couch and coffee table. We painted the walls and changed the kitchen cabinet doors and hardware. Got rid of the dated aqua carpeting and replaced it with shiny white porcelain tile.

This year, we really made it our own. I stayed in Miami Beach January and February while Allen went back and forth to New York to take care of his business.

Who knew we would end up loving the apartment we bought for my in-laws 22 years ago? Who knew how we would be so blessed to enjoy Miami Beach in our retirement years in the very same building that gave my in-laws so much pleasure.