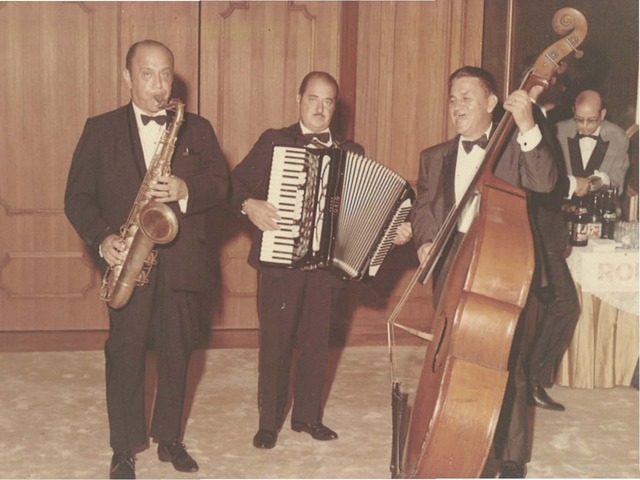 It was 1941. I was born at St. Francis Hospital on Miami Beach. My parents had met on the 14th Street beach a few years before.

This story is actually about my parents, Josie and Lou Adler. My mom and dad really made an impact in Miami musically. In the pictures, you will see a photo of my dad at the Deauville Hotel on Miami Beach where he was the head of the Lou Adler Orchestra. He also played the bass fiddle at the Delano, Saxony, and the Americana, to name a few. Those were great days.

We lived on Northeast 50th Street and Second Avenue, now the Design District. My dad’s orchestra was playing on Miami Beach and all the rehearsals were at my house. I was the most popular kid on the block. He and my mother, who was the organist at Temple Israel for more than 30 years, played for many weddings and bar mitzvahs over the years.

We loved to eat at the Boulevard Cafeteria and at Edith & Fritz, for lobster. We went to the Olympia and the Boulevard theaters for movies and went shopping at Richards and Lerner’s on Flagler Street. After Sunday school, my mother and I would go downtown to Burdines to the cafe inside and have the Snow Princess dessert. This was a beautiful doll with an ice cream skirt with silver sprinkles all around the skirt.

My brother, father and I joined the Jim Dooley fishing club and went fishing often. We took lessons on a big boat at the port, which is now the Port of Miami.

I went to Shadowlawn Elementary school, Edison Junior High and Edison High. The pep rallies rocked the school. All the kids would go to the Red Diamond Inn for pizza and to The Big Wheel drive-in. I became a “Debs” girl and attended many dances and had a great time at Temple Beth David on Coral Way.

I love to dance. My friend Sherna Simonhoff and I took dancing lessons with Hildegard, and my mother played for the dancers. Sherna and I danced around in her beautiful house in Morningside in our ballet pink. She and I loved to take the bus downtown; it was10 cents. To this day, when I’m here in the winter, Sherna, now Sherna Brody, and I still hang out.

I finished my last two years at Miami High in the concert orchestra playing the viola. Southwest Miami was a new world to me. I was introduced to “Little Jerusalem,” and L.J., as it was known, was loaded with kids from that part of town. I remember a Dick Clark’s American Bandstand broadcast and we danced like crazy. The only way my parents could find me in the crowd was to look for the lilacs in my hair.

I went to the University of Miami and became a teacher. I was at Treasure Island Elementary School for more than 30 years. I met my wonderful husband Norman and we have two beautiful children, Gregg and Jennifer. Those were the good old days. Miami is a wonderful, diverse place to live and the best is yet to come.