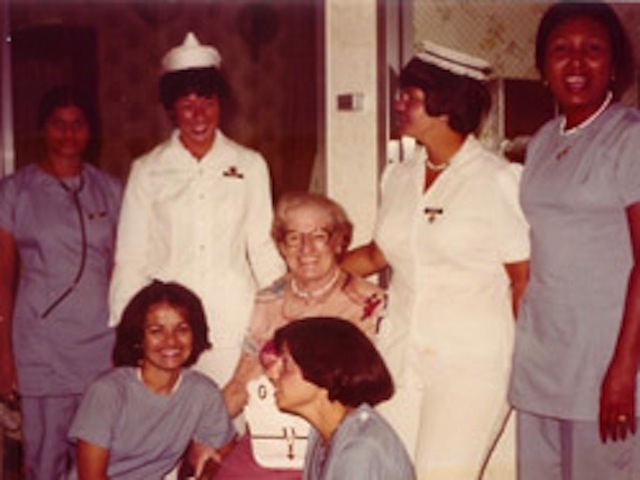 It was February 1964 and Chicago was really cold – a blustery, painful type of cold.

I vividly remember standing on the corner of East Superior Street and Lake Shore Drive, waiting for a bus to take me to the warmth of my new apartment located on Surf Street.

It was well after midnight and I’d just gotten off duty at Passavant Memorial Hospital. I’d been a nurse for just a few months and liked my job as charge nurse on the evening shift. Also, living in Chicago was my dream come true; however, it was January and while waiting for my bus it had begun to snow and the frozen particles were sticking to my eyelashes.

Finally, I reached my apartment, took a hot bath, put on the warmest jammies I could find, curled up on the couch and set about reading the mail. Leafing through my new copy of The American Journal of Nursing (AJN), I spotted the ad: “Nurses Needed at St. Francis Hospital. Come to sunny Miami Beach, live and work one block from the ocean…”

That’s all I needed. I fanaticized about the possibilities and vowed to rise early to make the call that would prove to change my life forever.

The next morning I called the contact person mentioned in the ad: Sr. Marie Francine, director of nursing. She explained that the census at St. Francis was seasonal and filled to capacity during the winter months. Evidently, the hospital relied heavily on “snow birds” to accommodate the heavy load. Although our conversation was short (she hired me over the phone and asked if I could come as quickly as possible), I recognized her to be likeable and endearing. In short order this “snow bird” would come to admire and love this woman very much.

Much to my parents’ chagrin, I arrived in Miami the next month with the intention of staying until spring. The following month, I wrote to the kind folks in Chicago and tendered my resignation. I would continue to work at St. Francis for the next 23 years.

Initially, I lived at the hospital nurses’ residence. It was a terrific deal: monthly rent was $25 – with daily room service. As promised in the AJN ad, the nurses’ residence was one block from the ocean. Those of us who worked the evening shift found plenty of time for the beach. It became routine for me to walk that one block to the 65th Street beach and work on getting rid of my unsightly northern pale. Frequently, prior to hitting the beach, I would stop at Pumpernik’s on Collins Avenue and 66th Street and order the coffee and Danish roll basket – all for $1.

Miami Beach in the ‘60s! To be alive and young during those years was simply the best. Despite the despair of war, we were a nation of young dreamers. Perhaps it was because of the war and the loss of our young president that we were determined to carry on and live life to the fullest – an easy task in Miami Beach.

St. Francis Hospital was located on Allison Island on 63rd Street. It was an impressive site, sitting on this wonderful piece of property that jutted out to the middle of Indian Creek. Over the years as it expanded it was a striking presence on Miami Beach.

In 1964, the hospital was only four stories high, yet quite spread out. Despite the age of the place, it was immaculate. One could plainly see that it had been well tended to by generations of people who provided the loving care that it deserved. From the solarium on the fourth floor one could look out and see nearly all of Miami Beach. In those days, when looking south, there were no high-rise condos and views of the ocean were breathtaking.

As remarkable as it was, St. Francis Hospital was far more than bricks and mortar. It was a community of caring and nurturing that truly made it one of a kind. I believe the Franciscan Sisters maintained an environment of family orientation so pervasive and enduring that all who graced its halls recognized it. Their mission must have been to provide the very best care possible to the community it served, to include the residents of Miami Beach and the many celebrities.

As a nurse, I have embraced my profession with great passion. For me, nursing was a vocation that I have always considered a sacred trust. For some inexplicable reason St. Francis Hospital attracted many others who must have held the same beliefs. Indeed, the sisters must have been very proud of the excellent care provided. I know that I, along with countless others, felt pride in our work.

When I left St. Francis to further my career, I vowed to promote this tradition of ultimate caring. Over the next several years, I was blessed with opportunities as chief nursing officer in three hospitals throughout Kansas. To impart my philosophy and expectations to nurses, I always told the story of St. Francis Hospital and presented it as the perfect hospital, the one for all to emulate.

Since St. Francis Hospital closed in 1992, two reunions have been held. Both were well attended by several hundred people, to include employees representing all departments, administrative staff and physicians.

While working in Kansas over the past 23 years, my husband and I never wavered from our plan to return to Miami. Finally, upon my recent retirement, we have come home.