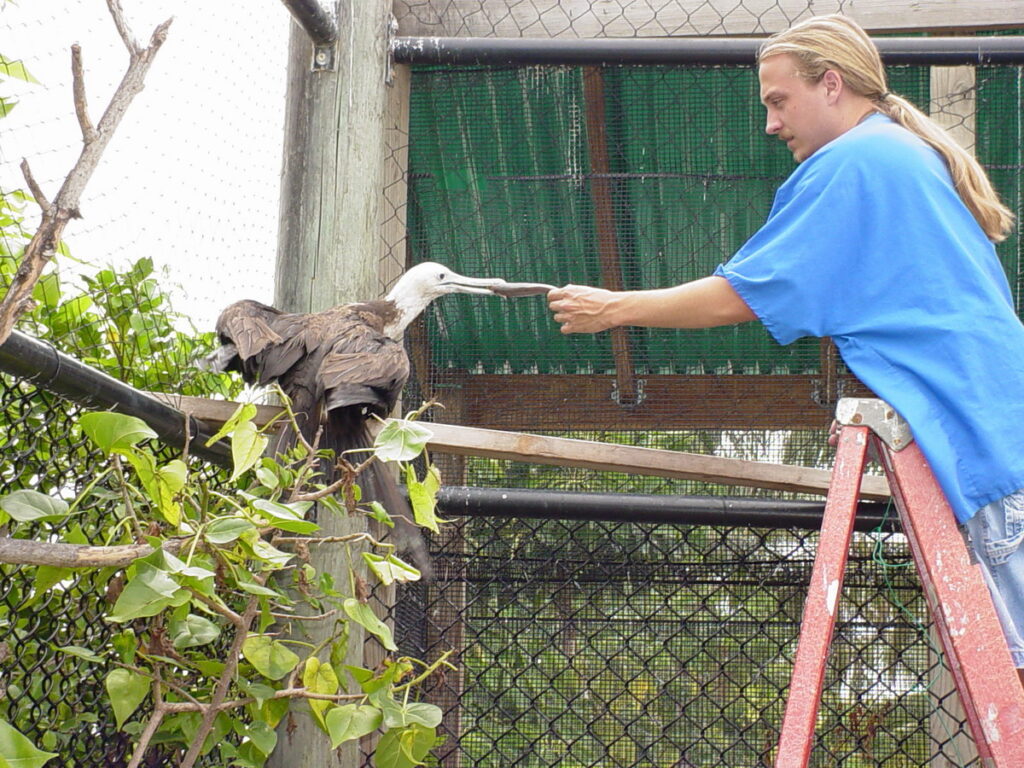 I was born in Dallas, and had moved with my parents to Caracas, Venezuela, and Santiago, Chile, by the third grade, and then we ended up in Miami. I started at Bay Harbor Elementary that September.

My parents were nomads: my father was from Colorado and my mother was English – they met in South Africa in their 20s. It did not look like they would ever settle down.

But Miami touched my mother, Wendy, the way no other city ever had or would. That first week, when I was in third grade, we lived at the Newport Beachside hotel while we waited for the moving trucks. My mother was out on the pier, marveling at the pelicans. She watched a woman capturing one of them.

That woman was Darlene Kelton, and that meeting changed my mother’s life, and my own.

Darlene ran a pelican rehab center with her husband, Harry, in Pelican Harbor Marina. They had just recently moved their operations from a tool shed to an actual building. My mother, always an animal lover, started volunteering. By the time I was in the fourth grade, she was bringing me along.

Harry and Darlene’s work was not limited to pelicans. One December night I came home to a new family member – a baby skunk. My mother had not been able to find a home for it, but my father was adamant – no skunks in the house. My mom named her Petunia, and wouldn’t you know it, Petunia and my dad fell in love. Petunia got a Christmas stocking with carrots and broccoli a few weeks later.

Growing up at Pelican Harbor Seabird Station was a special experience for me. I did not have many friends. And my mother’s passion was infectious. As “the kid” I got to do the fun stuff – climb trees to rescue entangled pelicans, sit on the pier and scan the horizon for birds. It was my sanctuary, too.

I started at Miami Beach High School in 2002. I still remember how excited I was to get my driver’s license – not to go joy-riding with friends but to pick up injured seabirds all around Miami.

When I was a junior, my mother got a call to go pick up 25 pelicans injured in Hurricane Dennis up the coast. We filled our Kia Sportage with supplies for other centers devastated by the hurricane, and brought back all those pelicans to raise here. My mother was so proud to make a real difference to the community here – to contribute to keeping Miami a safe place for wildlife.

I went away for school – biology, of course – but came back in the summers to work.

I remember one call from a teacher in Liberty City asking us to come pick up turkeys – turkeys! – in the school parking lot. I thought she must be mistaken, but I trekked out there and sure enough, there were two turkeys in a day care center parking lot.

I caught the female first. That one was easy, but the male saw what was coming and was not about to go quietly. He was a strong one. And the most embarrassing part?

After putting him in the crate, I looked up to see a long line of 5-year-old faces laughing hysterically at my takedown by turkey.

When I finished my master’s degree, I came back to Pelican Harbor Seabird Station, and to my mother’s dream.

By then she was the executive director of the station, with big plans for a bigger facility. She was also president of the National Wildlife Rehabilitators Association and was training rehabilitators as far away as the U.S. Virgin Islands.

We have also had some great adventures, rescuing pelicans from the most unlikely places: the Miami International Airport short-term parking lot, the pool deck of the Canyon Ranch hotel – during a tropical storm, and the clothing-optional Haulover Beach (the pelicans fit right in)!

I write this article for her. Miami and its wild residents were so tremendously special for her. They gave her life and purpose. And in turn, her love for this place was passed down to me.