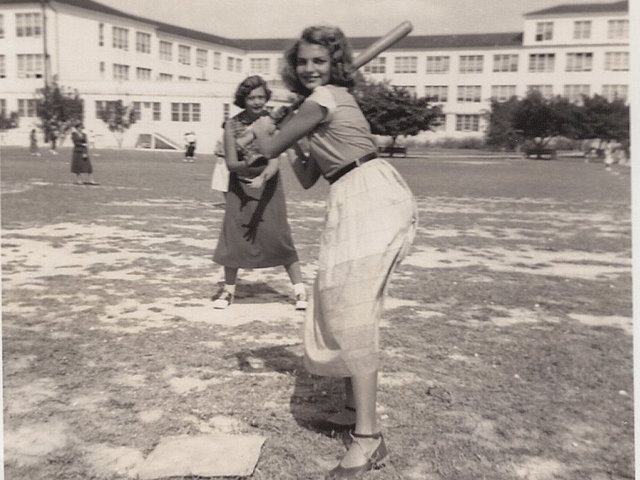 I got here by way of birth, born in Victoria Hospital, which was built in 1924. My mother, Louise Guckert, came from Louisville, Kentucky, and she married Ralph Yount, also from Louisville.

My mother was a trip; she never counted this first marriage because today people would just have lived together. The only reason I know about it is because Ralph’s mother remained a friend to us and was there when I was born. Ralph worked for a cruise line that was based in Miami, and the ships went from Miami to Cuba and back to Miami. My mom and his mom would go on the cruises. Can you imagine what a ball this was in the 1920s?

Between marriages my mother worked for Smith, Richardson & Conroy. Her second marriage was to Verne Vivian Buell, born August 23, 1902, in Ft. Pierce. He was the owner of a dry cleaners located just over the Flagler Street bridge. They were married in June 1935 in Louisville. I came along the following year. Mother attributes her one and only pregnancy to the June Taylor dance studio where she took tap lessons. Mom was third-generation American.

My father is another story. He was the last child of Lula Mae Summerlin, born January 8, 1867, in Florida, daughter of Capt. John Alexander Summerlin, Confederate, 1st Regiment, Florida Cavalry. My father’s father, whom I never knew, was Sylvania Selvester Buell, a Union soldier. My lineage goes back so far I lost patience, but stories have been handed down that these two men could have some very heated conversations.

Mother never told her correct age on anything — my birth certificate, her marriage license, her driver’s license, or her voter registration. We lived on 12th Street near the Orange Bowl. There were no gates to keep people out so this was my very early playpen. Mom would take me there and I’d run up and down all over until I was exhausted.

We moved to Southwest 32nd Avenue between 8th Street and Flagler. I went to school with Indians and white Americans at Orange Glade Elementary, located on the corner of 27th Avenue and 8th Street. The buildings were little wood houses. My second grade teacher, Ms. Rice, thought I was such a pretty little girl she entered me in an audition for the opera Carmen. I made it. The opera took place at Miami High’s auditorium.

I remember riding a trolley car on Flagler Street. It went from 32nd Avenue to downtown. My mother would take me to Burdines, and on my birthday, I would get a special princess ice cream with a porcelain doll that sat on top of a flowing skirt of ice cream, trimmed with silver candy beads.

I loved school, especially when first and second graders got to bring a blanket to school and lie down under the pine trees after lunch and take a nap while listening to classical music coming from a gramophone. I would give anything for all you who came later to know what it was like.

Sometimes my mom would pick me up after elementary school and we would go downtown to Richards Department Store and for a dime the jitney would take us to South Beach.

First we would stop at a street corner juice stand and have a fresh-squeezed orange juice. We then walked a block to the ocean and you could look down the beach, and as far as you could see the water was crystal clear blue. The sand was clean, so white it hurt your eyes, and not a high rise in sight. There were very few people then and you felt like you could run free.

The war broke out, for those of you too young to remember World War ll. It didn’t seem to faze us much until south Miami Beach, full of Art Deco hotels and small apartments, became a training ground for American soldiers. This didn’t stop my mom’s family; they were snow birds of the first degree. The little motels and Art Deco hotels became barracks and the rest was left for vacationers.

The family always rented a place for winter and Mom and I would join the relatives. Wolfie’s was the choice for lunch pickles in a bucket and sauerkraut in another. Soldiers marched all around the apartments. Remember, I was very small but won’t tell tales out of school.
Early in the morning two soldiers would come by and pick me up and take me to the beach where binoculars were available. They would lift me up to see and sure enough there were submarines close to the land. I don’t know if they were kidding or not but they told me they were German submarines.

I would ride my bike to school and go home a different way, and sure enough the bike was always where I left it.

I’m still here, married to another native Miamian. He shot missiles to the moon, went to MIT and owned Clifford’s restaurant. We both remember when.