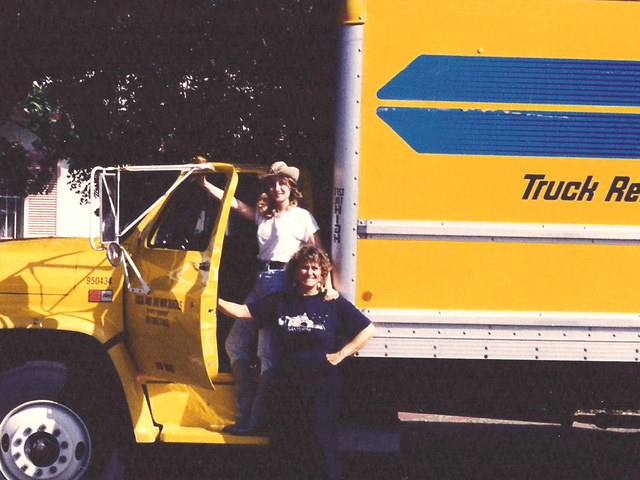 My adult daughter, Sage Hoffman, lies in a hospital bed, her body attached to numerous IVs, monitors and a catheter. I am in a little cot only a foot away. Sage has just donated a kidney to a long-time friend. Now she is recovering in the ICU unit where the nurses never seem to rest. Our room seems to be the tiniest in the ward. She’s in pain, and I am stressed to the max.

With nothing much else to do, I start to think about how things have changed in our lives since that day in 1987 when we first moved to an Art Deco apartment on Collins Avenue. After a botched nine-month marriage in Broward County, I decided to strike out on my own in Miami Beach. Sage was a junior in a magnet program in a local high school, and I was working for Miami Today newspaper.

We arrived in Miami Beach during a strange and wonderful time. South Beach was still a haven for elderly retirees from up north. But changes were happening. We lived in a charmingly renovated “Tony Goldman” apartment. Tony, like others from up north, was seduced by the bold geometric shapes of Art Deco architecture and the cheap prices of buildings. In South Beach he began buying up and renovating buildings, which was the beginning of Goldman Properties and its many restaurants, buildings and arts programs in Miami Beach and Wynwood.

Some evenings in the mid-1980s, Sage and I would sit on the front porch of our building and watch the world by – and what a different world it was compared to suburban Denver where we both grew up! Right across the courtyard lived Leonard Horowitz, the man who created the pastel palate that transformed the streets of South Beach. Around the corner from our apartment were the Clevelander Hotel with its open-air bar and the Edison Hotel, where Arthur and Charlotte Barron operated a swinging jazz club.

The TV series “Miami Vice” was everywhere. One day Don Johnson and his crew would be shooting scenes in our alley. Another evening Miami Vice set up shop in the beach-side café of the Edison. That day Sage put on her hippest clothes and snuck onto the set as an extra. Later in the season, we spied Sage in a Miami Vice episode. Granted, it was for three seconds, but there she was, seated at the corner table of the Edison cafe.

The streets were also filled with real Miami vice. While retirees rocked on front porches of old hotels, drug dealers and prostitutes were out on the streets. Drug dealing and cocaine cowboys were a reality. One afternoon I heard screaming out in the street. I had always vowed that I would never hide behind window shades as people had done during the murder of Kitty Genovese in Queens. I got to the sidewalk just as a guy ran by, clutching a small item under his arm. I surmised that he had mugged an old lady and took her purse, so I ran to see if I could help her. Yikes — I ran right into four policemen running after the guy with their guns drawn. Whoops. Just another 1980s day in South Beach.

At Miami Today I was assigned Miami Beach as my territory for ad sales. I had the fun task of visiting every restaurant, hotel, shop, and art gallery, from Lincoln Road down to 5th Street. What a way to get to know our adopted town! I met people who still are my friends. What a crazy town it was, but Sage and I decided to stay.

We found a 1940s home in the mid-beach area and bought it for about one fifth of what it would cost today. Sage and I then flew back to Wheat Ridge, Colorado, picked up all our stuff that we had left in storage, and drove for five days in a big yellow rent-a-truck all the way back to Miami Beach.

Five college degrees later (two of Sage’s and three of mine), a new marriage, lots of travel, and too many friends to count, we are still part of the South Florida scene. Sage is a director for Mary Kay Cosmetics, and I am the founding director of the Arts at St. Johns at the St. John’s church over on 47th and Pine Tree Drive.

But wait, what about that donated kidney? This is a story of who Sage and I have become. We are not just living off the bounty of Miami, we are part of those people who also give back to our community. Miami is a colorful, sun-filled town, but it is also a place of great need. I give back through my church and the arts program, which uses the arts as a way to address social issues. For example, in spring 2015 we are presenting “Convivencia Miami,” a project that celebrates a time in Spain when Jews, Christians and Muslims lived, worked and created together in relative harmony. We think this is an excellent model today for our very diverse South Florida.

Sage gives back through Mary Kay, in the way it supports and uplifts women. And she also felt called to give away her very healthy kidney (heck, you only need one!) to a friend who was on dialysis and needed a transplant. Her kidney is now alive and humming in her friend, and both are recovering nicely.

Thanks Miami, for encouraging us to become the people we are today!