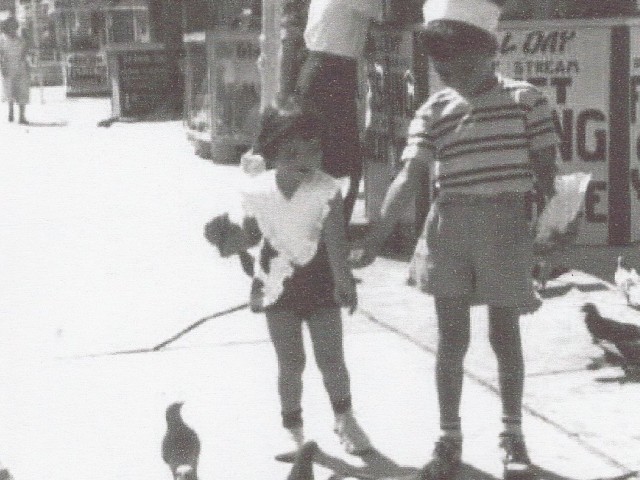 Oh, Miami! What a wonderful and glorious place to live.

My parents moved here from Pennsylvania, when I was almost a year old. My father opened a soda fountain on Southwest 67th Avenue and Eighth Street. At the time, it was the closest place for the Miccosukee Indians to come and eat. I remember the pictures of them in their traditional Native American dress.

We lived in a small house behind the store, and when my mother’s family soon followed from Pennsylvania, everyone lived in this small home while my father and his new neighbors built a house on Southwest 57th Avenue and 33rd Street. The mortgage? All of $7,000. The neighborhood is now known as Schenley Park.

When the area on 67th Avenue started to build and added a drugstore, my parents sold the business and my dad took a job at Dressel’s Dairy Farm as a milk delivery man. He used to get up at 4 a.m. to start his milk route. What a great place.

Dressel’s Dairy was a farm with an ice-cream shop, ponies to ride, and cows to watch being born. We used to have great birthday parties there. Sadly, this place also closed and moved upstate to a bigger plant.

I also remember the Holsum Bakery on South Dixie Highway. Who could forget the great smell — a smell you just waited for?

When my uncle Paul went to the University of Miami he would take me to football games and we played on the grass.

My grandparents soon moved into their own home on Villa Bella Avenue. My grandfather continued to work as a food business owner. I loved the trips with my grandmother to downtown Miami where we would go to the old Burdines store and I used to get M&Ms; by the pound because they were not packaged. Burdines had a “ladies lunch room” and an ice-cream parlor, which was such a special treat. At Christmas time there was an amusement park on the roof with wonderful rides and, of course, Santa Claus! So sad, it is all gone now.

One of my grandmother’s favorite places was the cafeteria on Miracle Mile. We would go there for lunch. My grandmother lived in her house on Villa Bella Avenue until her death at 103.

My dad’s favorite things were Bird Bowl and waking everyone up to go to 7 a.m. Mass at the Church of the Little Flower. Mine? The skating rink next door to Bird Bowl. My mom’s? The Slim and Trim club, to which she belonged for over 25 years.

My brother and I would walk to what was then Children’s Variety Hospital. We would fly kites and play football in their front yard. It was such a big place to have fun!

There is a canal a street over from my parents’ house with open towers in which to play “king and queen.” They were sealed shut later because of bats. The boys in the neighborhood would swim in the canal and it was sparkling clean, but I was too scared so I would just walk the wall behind the canal.

The Biltmore hotel had a pool that was so deep you could “scuba dive.” Doctors were trained there. Somehow, my doctor got my friends and me into the pool. It was so deep that it scared us.

We had Fuller Brush men coming door to door selling such great products, and also a knife sharpener who would come by every month to sharpen all of my mom’s knives. One of the most fun things was the man with ponies. He would come to our houses and had hats and costumes to take pictures of us riding. It was just a great thing to do.

When my father worked at the dairy he would get off on Wednesdays, which meant breakfast at Crandon Park. Back then it had grills set up with picnic tables and even spigots to clean with. Mom used to say I loved the spigots more than the beach. But how could you forget the zoo and amusement rides there? What a special treat to go there. I remember taking my children to the zoo and the rides there.

Mr. Crandon had a huge house on 57th Avenue that was set way back; it had a wall around it and the kids used to walk on the wall till the butler would catch us and come running to make us get off. Now that area is filled with houses.

How can I ever forget the Venetian Pool? So cold and so big. It had a snack bar when you first walked in and I just loved to get the cherry sticks, hot dogs and Florida trinkets. They even had a Miss America contest there! The pool had islands in the middle and a cave with an opening you could dive through. You had to swim across the pool before the lifeguards would let you go to the diving boards. How proud I was to do that. The pool is fed with an underground spring and every night it was emptied and refilled with ice-cold water.

We would drive to the pool and have to do a circle around this huge fountain with faces that sprayed water. On special days we would go by the fountain and it would be full of soap bubbles to clean it. But as I grew older, I spent less time at Venetian Pool.