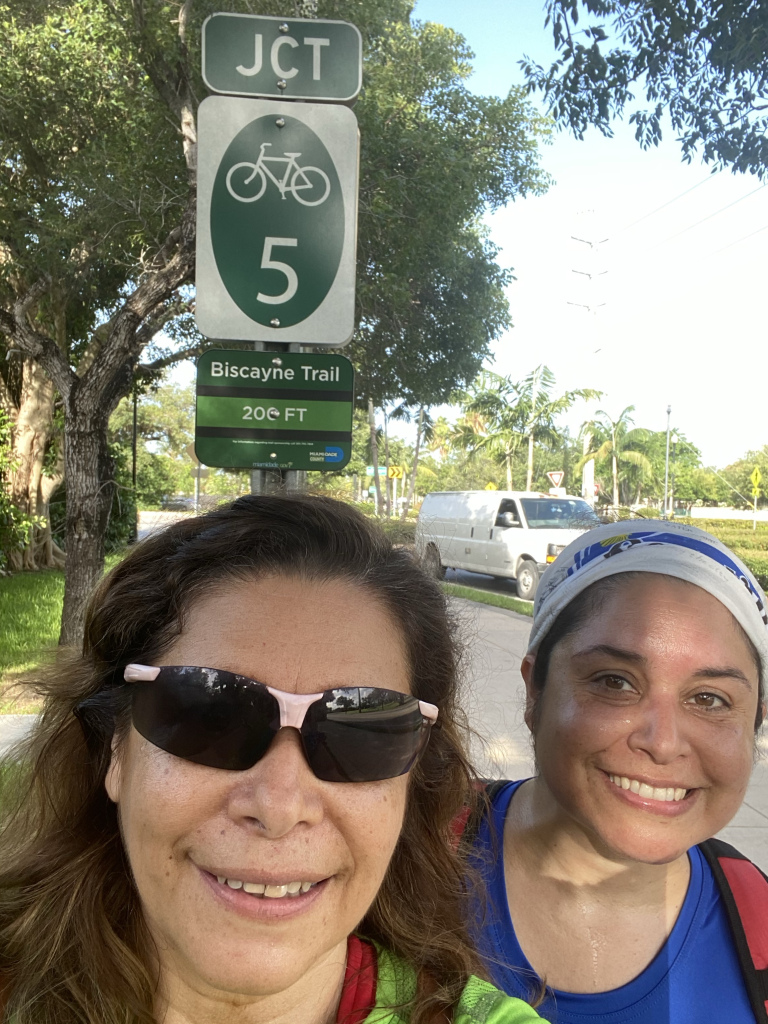 As a Cuban-American New Yorker, I have strong family and cultural ties to South Florida. Since childhood I spent summer vacations in the Magic City, soaking up Cuban culture as well as the glorious sunshine. Once I started working as a teacher for the New York public schools, I continued the tradition of enjoying July and August in the heart of El Exilio Histórico.

In 2015, I joined The Cove/Rincón International, a Miami-based non-profit. I never imagined that five years later, from two thousand miles away, the “Cove” would offer me a psychological lifeline, rescuing me from the brink of depression as the world learned about the novel coronavirus.

Sheltering-in-place in my New York City high-rise, I felt mounting anxiety and apprehension. At the age of 56, having retired from teaching in 2019, I had become my mother’s primary caregiver. As medical experts warned that the elderly with underlying conditions were most vulnerable to the “invisible enemy,” my world revolved around protecting her. My paralyzed metropolis, known for its theater, museums and nightlife, became the epicenter of the virus, and scenes of body bags piling up outside area hospitals were horrifying.

Then Miami resident Marily A. Reyes, founder and president of the Cove, seized an unprecedented opportunity to use her platform as “mother” of this cultural family to promote the mental health of her members. She initiated a project she named “Sharing the Arts During Quarantine.”

Knowing that human beings are driven by a need to forge social bonds, to face each day with a sense of purpose, and to support a cause greater than themselves, she called upon painters, writers, singers and creative souls of every stripe to tap into their talent and create, create, create!

Having studied psychology at Miami-Dade College, Marily was well aware of the therapeutic effects of the arts. Through chapters of the organization in the Americas and Europe, the Cove had an impressive range of talent to draw upon. The response to “la convocatoria” (the call) was overwhelming and international.

Art poured into Ms. Reyes’s email inbox at a breath-taking pace. She uploaded every submission to the organization’s official Facebook page, the Cove/Rincón Corp. I marveled as the page developed into a virtual museum and library. From paintings capturing the fluid movement of a flamenco dancer to the charming “Cofre de Recuerdos” (treasure chest of memories), by 12-year-old Natalie – the Cove’s youngest member – the page was a means of connecting human beings and providing entry into worlds of beauty while the world was in lockdown.

Before the project began, I felt detached from time, from seasons, and from others, consumed by daily briefings full of “models” of infections and grim warnings regarding I.C.U. capacity. In my paralyzed metropolis, I discovered worlds of beauty accessible through my computer. I found a reason to get up in the morning.

Each day brought fresh material to the Cove/Rincón Facebook page and I was eager to encourage others in their work, some of whom I had met in Miami at summer Cove events, but many whom I had come to know only through their art. I added “Greetings from the Big Apple” to members in Mexico, Argentina and Austria, and we started exchanging virtual hugs. I wrote my own poem in Spanish about my grandmother. Suddenly I realized that something new and unexpected had developed. The news was still dire, and I continued to heed the medical authorities, but I noticed that my state of mind had changed dramatically. Hope replaced despair, and I felt grounded in the collective power of human beings not only to produce art, but to nurture each other from afar. The sense of solidarity was palpable.

On January 1, 2020, I officially became a minimalist. I’m collecting experiences now, not stuff. I also figured, the less I own the more I can travel, only there’s no traveling this year. I still need my dose of traveling though. Travel is ESSENTIAL.

While international traveling is suspended, people have come up with virtual traveling ideas. The Vatican Museum, the Great Wall of China, the Taj Mahal – all are in virtual tours that can be done from home. Cool, but my idea of traveling involves getting up from the couch, so I embarked on a new kind of journey. I researched the Miami Trails and their histories, picked up my water bottle and started out into new explorations of a very familiar place: home. Since I enjoy the writing as much as I enjoy the hiking, here is my little contribution to encourage you to enjoy and learn more about our own community. In this pandemic, my passion for traveling has led me home.

Coco Plum Circle in Coral Gables marks the junction of Commodore Trail and Old Cutler Trail. Old Cutler Trail goes south along Old Cutler Road through beautiful historic neighborhoods. Old Cutler Road is historic itself, being one of the first roads in Dade County connecting Coconut Grove with Cutler, an old farming community. The trail follows a natural limestone ridge along Biscayne Bay and was referred to by the pioneer settlers as “The Reef.” Then it was widened to become a wagon trail and declared a public road in 1895. I can almost see myself on top of those wagons wearing a flower hat. The Florida legislature declared Old Cutler Road a historic road in 1974.

Walking down Old Cutler Road is a delight. It is shaded all the way to Matheson Park/Fairchild Tropical Garden by beautiful old banyan trees and charming Floridian-style houses. The trail is also a bike trail, so watch out for silent bikes coming from behind. Right across from Fairchild Tropical Garden there’s a parking lot that leads to a forest protection area within Matheson Park. It’s not part of the trail but it’s worth the exploration. Birdwatching, photography and nature appreciation are the activities permitted here. It is truly a forest within the neighborhood and in the middle there is an open space where other paths meet. We took the one going south and eventually found the Old Cutler Trail again.

A little south of Fairchild Tropical Garden, the trail actually goes through a gated community. To follow the trail you have to cross the street and go to Snapper Creek Road. At the other end of Snapper Creek Road, you leave the community and cross the footbridge to Red Road to continue on Old Cutler Trail. Not far from there, at Southwest 110th Street, you will find the entrance to the old Parrot Jungle. It opened in 1936 and quickly became a tourist attraction with a signature structure. After Parrot Jungle moved, the Village of Pinecrest purchased and restored the building and it is now a park with a farmer’s market, children’s activities, and events year-round. It is now called Pinecrest Gardens.

After Pinecrest Gardens, Old Cutler Road follows the coastline. It curves from 57th Avenue to 67th Avenue and at the Y junction at 135th Street you have to go left to continue the Old Cutler Trail on Deering Bay Drive. One block after the Y junction it’s Chapman Field Park. You don’t have to enter the park to continue on the trail, but we did. There’s a trail within the park with a big loop that starts and ends at the canoe dock. Fishers canoe through the canal into open sea while dog walkers let their dogs run without leash in the trail.

There are few shaded areas from Chapman Field to the Deering Estate, so it is very important to wear a hat and sunglasses and don’t forget the water! The Deering Estate, on 168th Street in Palmetto Bay, is an ocean-front historic site and museum with beautiful grounds to enjoy nature. It is part of Miami-Dade Parks and an admission fee is charged. Outside of the estate you may visit the historic Chinese Bridge and kayak or canoe to open water from the People’s Dock.

Just across the bridge, on 173rd Street, you will find Thalatta Estate. I can’t describe how lovely this place is. It was purchased by the Village of Palmetto Bay and is also part of Miami-Dade Parks, admission free. Its charming Spanish architecture, turquoise water pool, perfectly maintained grounds with palm trees and all kinds of flora, and the breathtaking view of Biscayne Bay make it perfect to host the most romantic wedding. Thalatta Estate is my favorite site along Old Cutler Trail.

The Palmetto Bay public library on 176th Street at Ludovici Park is worth mentioning. With an amphitheater, a two-story community center and a bike path loop, it must be the highlight of this community. I will certainly be in the lookout for events at this location when this pandemic permits it. Next to the library there’s a stable, most likely private. Horses are such beautiful animals.

Cutler Bay starts on 184th Street. It was designated as Tree City USA in 2009 by the Arbor Day Foundation. Although beautiful and shaded with trees, you can notice the change in the neighborhood. It’s newer, not historic and not grand. Old Cutler Trail ends where 216th Street, 87th Avenue and Old Cutler Road converge in a circle.

From Coco Plum Circle at Southwest 72nd Street to the south end of the trail at 216th Street there are 13.5 miles of asphalt trail that wait to be conquered, and it’s at this point where Biscayne Trail starts, which I will cover in a future post. Eat seasonally, love locally… or love your local trails.