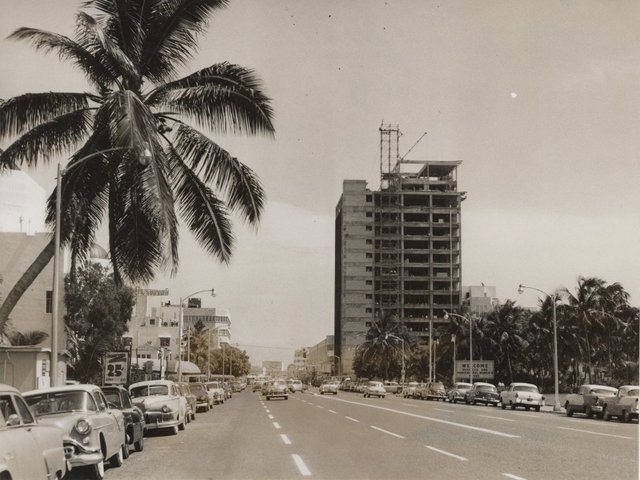 In the 1950s, while I was still a young child, my family moved to Miami Beach from Woodbine, N.J.

When we arrived in Florida, our household was an extended one. There was my mother, Rose, my father, Kalman, and my mother’s parents, Morris and Sophie Silberman. We opened a shoe store (Don’s Bootery) on Washington Avenue shortly after arriving in Florida.

At first, the whole family lived in a rented apartment at Ninth Street and Collins Avenue. A few years later, we purchased a small apartment building at 620 Jefferson Ave., where we all lived. The old Hebrew Academy was located across the street and I remember students playing softball in a vacant lot next to our apartment. On Friday nights, I would go roller skating at Flamingo Park.

Many hotels had large dining rooms or coffee shops where guests on the American Plan ate their meals. I worked as a bus boy at the Algiers Hotel Coffee Shop where I got to deliver trays of food to the Miss Universe contestants staying at the hotel. I also transported baked goods from the in-house bakery to the coffee shop. When I dropped an entire frosted layer cake on the floor, the baker re-frosted the cake and sent it on its way back to the coffee shop.

I paid more attention to clothes than I do now. I remember buying genuine pigskin Hush Puppies shoes with their own brush, and a “bleeding madras” shirt with special washing instructions. Darwin’s was the place to go for the latest men’s fashions, such as tight-fitting, beltless DAKS pants.

For entertainment, we enjoyed taking evening strolls along Washington Avenue. At the Mars Juice Bar, I drank coconut milk from cone-shaped paper cups. There were “fruit shippers” and other stores where tourists could buy baby alligators, little wood crates of orange-colored chewing gum or turtles with painted shells.

There were several movie theaters on Lincoln Road. One of my favorites was the Caribe, which had a live parrot on a perch. On Saturdays, I went to the Colony Theater to see horror movies. The Beach Theater hosted the “Summertime Fun Shows” where you could buy “mystery boxes” hoping they were the lucky ones containing coupons for prizes.

Miami Beach was once referred to as the “winter crime capital” of America. Meyer Lansky attended services at Beth Jacob Synagogue, the “gangster shul,” where I was bar mitzvahed. Illegal bookmaking was prevalent. My grandfather never had a telephone in our shoe store, but some bookmakers wanted to put one in so that illegal bets could be taken at that number. This was an offer he DID refuse.

Previously open to vehicular traffic, Lincoln Road (between Alton and Washington) was converted to a pedestrian mall in the early 1960s. There were fountains, band shells, colored lights and trams running the mall’s length. In the large Woolworths on the corner, you could buy everything from a parakeet to a banana split. Also on the mall was Saks Fifth Avenue, which piped perfumed air into the street.

Because of easy bus access, downtown Miami seemed to be an extension of the Beach. The Sears Department Store on Biscayne Boulevard had its own restaurant, gas station and candy counter where you could buy bags of nuts and rock candy. Christmas time, we went up on the Burdines roof for carnival rides. At Bayfront Park, I could buy peanuts to feed the pigeons and walk though the “rock garden.”

Before Art Deco came in vogue, the hotels on Ocean Drive were inhabited primarily by senior citizens, some of whom migrated from Eastern European shtetls (villages). Along Ocean Drive were benches and makeshift stages where elderly people played instruments, sang songs and told stories in Yiddish. At Lundy’s Market you could buy lox, knishes, and smoked sturgeon. Butterflake Bakery sold kichel, taiglach, rugelach and onion boards.

Eventually, our shoe store (Don’s Bootery) went out of business, in large part due to the changed demographics. Since my father had worked at the shoe store, he had to look for another job. Eventually he found employment with the City of Miami Beach Parks Department where he worked until the time he retired.

My mother went to work at Burdines on Miami Beach and is still enjoying her lifetime employee discount. Many of the places I mentioned have vanished, but their sights and sounds remain vivid in my mind. Suffice it to say, growing up on “South Beach” was a unique experience that I remember fondly.