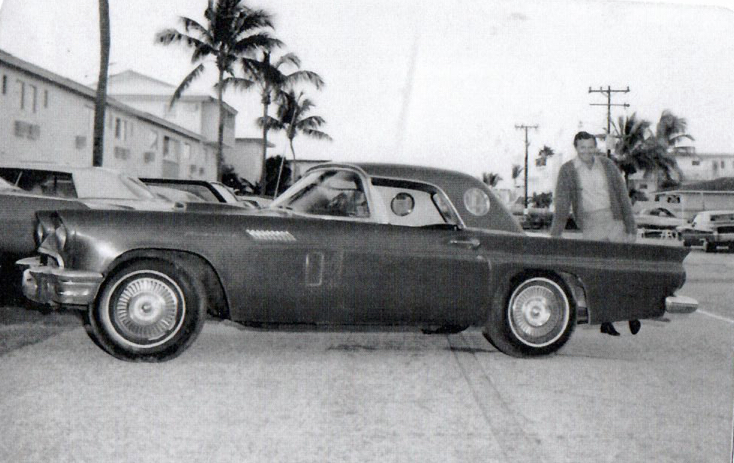 In June of 1949, I graduated from high school in Manhattan, NY. My mother and father wanted me to go to college in the New York area but since I had a couple of friends who were going to the University of Miami, I insisted go there.

In September of 1949, I arrived at the U. I registered late so all the dorm rooms were filled. I had to live off campus. I found a nice little apartment on 22nd Avenue, just off of SW Eighth Street on what is now Little Havana. My rent was $50 per month.

Since I spent a lot of time on Miami Beach, I decided to live on the Beach starting my second year at the U. I stayed at the Boulevard Hotel on Dade Boulevard (not the one that is now on Ocean Drive). It cost $100 per month but there was no air conditioning. It was only a few blocks from all the nightclubs such as the Beachcomber, Copy City, and Circos. A lot of the showgirls from those clubs also lived at The Boulevard. I dated one for a few years.

The other big night club was Lou Walters’ Latin Quarter, which was located on Palm Island. In those days, all the big stars such as Dean Martin, Jerry Lewis, Frank Sinatra and Tony Bennett performed in those clubs. The clubs were only open for the winter season, which was November until April.

Most of the hotels on Miami Beach also closed for the summer. I found a hotel on Ocean Drive that was one of the only ones that stayed open all year. It was the Winter Haven Hotel and I paid $30 a month (that’s a dollar a day) for a window unit air-conditioned room.

I did this each year until I graduated. Six months at the Boulevard and six months at the Winter Haven. After graduation, I decided to stay here rather than go back to New York. My parents had already retired and also moved to Miami Beach. They ended up living here for the rest of their lives.

Soon after I graduated, a friend came down from New York to visit me. We went to a few of the clubs on Miami Beach, one of them being the Rocking MB. Since we both spent all of our money that night, I told my friend not to worry because I was expecting a check from my company the next day. I was working as a salesman.

When I went to the mailbox the next day there was no check but there was a piece of mail addressed to me. I opened it and there was a membership to the Diners Club. I had forgotten that I saw an ad in Esquire Magazine for The Diners and that I applied for it. That was the first credit card. There was no American Express, Visa or MasterCard yet.

Well at least we could eat.

At the time there were no plastic cards like today. It was a little book that listed all of the places in the whole country that accepted the Diners Club. The front cover had your name and membership number. We looked in the book under Miami and there were just a few places that took the Diners Club. I saw a great steak house that I knew of named The Robin Hood. It was on 36th Street and Biscayne Boulevard, which is now a Shell Gas Station. So we went there and each had a great steak dinner with a couple of drinks each. The check was under $15 and that included tax and tip.

I was now ready for an apartment and I had a friend who was a builder. He had just finished a 10-unit apartment building right on the water in a place called Harbor Island, North Bay Village. My friend lived on the first floor and I took the apartment on the second floor at the end right on the water. My rent was $150 per month and I stayed there for 10 years, all at the same rent. At that same time a place called the Racket Club just opened right across from me.

North Bay Village became the nightlife area at that time. The clubs could stay open until 7 a.m. Also starting in 1954, the big hotels came into being on Miami Beach. The Fontainebleau opened first, then came The Eden Roc followed by The Deauville, The Carillon, The Americana and also the original Diplomat Hotel in Hollywood Beach. As they all had large nightclubs, all the big stars played in those six hotels. That spelled the doom of the standalone clubs like Copa City and others.

As the bars and clubs had to close at 4 a.m. on Miami Beach, all of the entertainers and club people who wanted to party gravitated up to North Bay Village. There was one called the Bonfire, which was a great restaurant and later at night became a club. Another place was the Harbor Lounge & Black Magic Room.

Because they only served drinks and no food; when their customers got hungry they went to the Bonfire. There was an open area patio at the Harbor Lounge not being put to use, so a restaurant was put in that space. My friend was hired to build a kitchen and dining room. The restaurant was named The Place For Steak. A steak dinner included a great salad and a baked potato. That’s all they served at first. But they had two sizes. The junior steak dinner cost $2.95 and the senior was $3.95.

At first, they were only looking for a late crowd so the dining room opened at 11 p.m. Russ, my builder friend, and I were served the first two steaks. As the place became very popular, they expanded the dining room, got rid of the Black Magic Room and opened at 6 p.m.

At that time, I was doing quite well financially, so I bought my first new car.