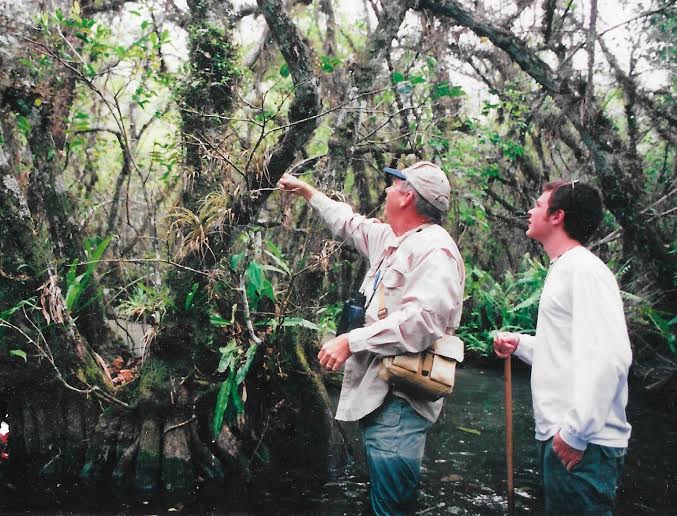 Like the strong root system that supports a stately oak tree, the love of the great outdoors and parks and recreation runs deep in the lives of two Miami-Dade Parks sons — Eric King, park manager at Greynolds Park, and Chad Pezoldt, park manager at Tropical Park. Both were inspired by the formidable examples and career paths of their fathers, Jim King and the late Charles “Chuck” Pezoldt, who were leaders in the Miami-Dade Parks department.

Eric King’s early years were centered on parks and included regular car trips to the Everglades and frequent trail hikes with his dad, Jim, who was a long-time parks naturalist and a key figure in the start-up of Miami EcoAdventures. He oversaw environmental education programming for the parks system for more than 40 years.

“These experiences allowed me to learn to appreciate nature and the outdoors,” Eric King said. “But it was one parks experience that I shared with my dad as a kid that truly sparked my enthusiasm for parks and recreation and made me a committed nature steward.”

On a Fourth of July 22 years ago, a then-10-year-old Eric was excited about joining his father at his job at Crandon Park on Key Biscayne, as the Key was having its fireworks spectacle that evening. Their first stop was the park’s sea turtle hatchery. “It was my first-time there and needless to say I was awestruck and amazed at seeing the eggs hatch into tiny sea turtles,” he said, adding, “I was so hooked that I opted to stay and care for them through the evening, skipping the fireworks.”

His enthusiasm for parks continued.

As a teen, he worked as an official county parks volunteer, recalling how proud he was to wear the “Parks shirt” and be surrounded by amazing nature views and wildlife, such as herons, osprey, butterflies, horseshoe crabs, and of course sea turtles. “It’s no surprise that I decided on a career in parks and recreation,” he said.

Now 32, Eric is proud to say that he’s stilling living the “Park Life.” At Greynolds Park, he lends his expertise to the staff that he leads and introduces Miami-Dade residents and their children to South Florida’s rich history and wildlife on assorted eco-treks on land and sea.

For Chad, the county parks played a huge part in his childhood. “There are so many fond memories with Dad that it is hard to pick just one,” he said.

His dad, Chuck, was a director for the parks department and held several high posts during his 21 years of service. The elder Pezoldt, who died of cancer at age 62 in 1996, is credited with shaping and growing the county parks system to 13,500 acres and introducing innumerable high-profile special events. Chad recalled helping his dad out at the Superstars Championships at Crandon Park: “I was completely in awe of seeing famous professional athletes like Barry Sanders, one of my favorite childhood sports idols.”

However, that experience paled in comparison to his first-time volunteering with his dad at the Special Olympics games at Tropical Park. “It was the moment that I realized that parks better lives, including my own,” he said. “What so impressed me was seeing such joy in the kids’ faces as they crossed the finish line. Regardless of finishing first or last, they were joyous. Sharing their victory in that moment, gave me so much. And that continues to drive me to this day in my work and volunteerism with other adaptive sporting events.”

Before joining Miami-Dade Parks two-and-a-half years ago at age 39, Chad spent 16 years in sales and earned a master’s degree in public administration from Florida International University. “My parks career may have started a little later in life, but my outstanding experiences with my dad led me back and I am grateful to be continuing his great legacy of giving back to the community.” At Tropical Park, Chad oversees a staff of 30 and a wide range of park amenities, including ball fields; tennis, racquetball and basketball courts; a football stadium; a track and field area; a community center and a full-service equestrian complex. Residing in Cutler Bay with his wife and young son, he is nurturing “generation next,” deeply rooted in park life.