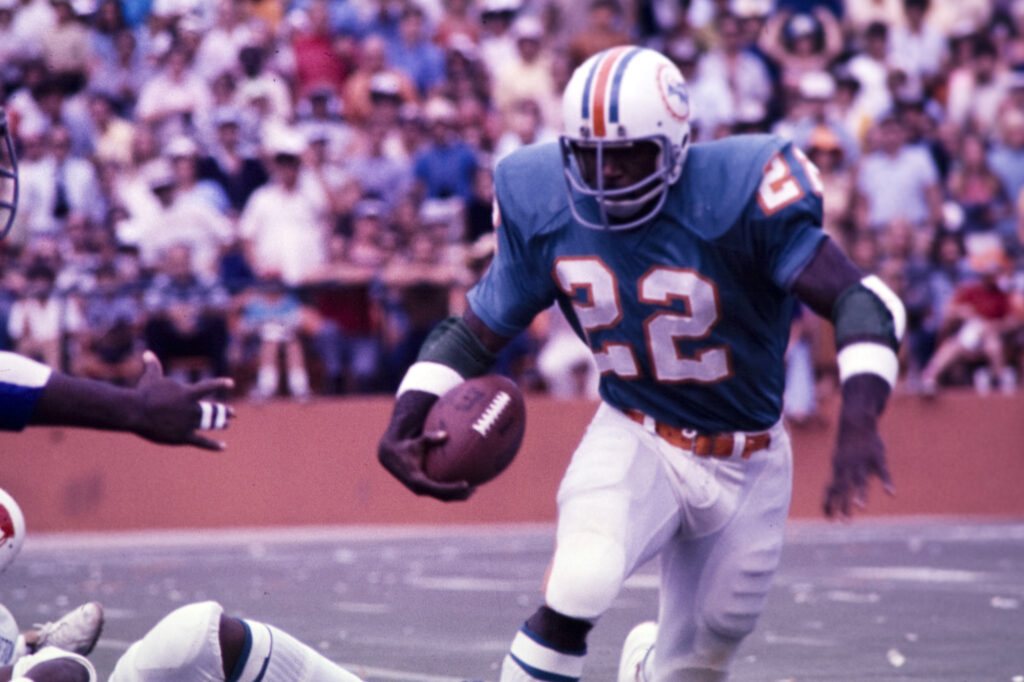 My name is Eugene Morris, but many know me as “Mercury.” I played running back for the Miami Dolphins from 1969 through 1975.

I first came to Miami from West Texas State for the North-South Shrine game, which was played on Christmas Day 1968. When I flew down here, it went from 18 degrees below zero and about 12 inches of snow on the ground, to summer. When I got off the plane, I thought I was on another planet.

I saw what I thought looked like the guys from “Hawaii Five-O,” dressed in those shirts. I thought it was really cool down here. They drove us over to the beach where we stayed. I didn’t know what the town was like but I said to myself I would love to play down here.

In January of 1969 I came down again. I had an agent who brought me down for Super Bowl III. So when Joe Namath and Don Shula clashed, I was at that game sitting in the nosebleed seats, up there at the top of the Orange Bowl, over on the south side.

The next month, I got a call from Joe Thomas of the Miami Dolphins. He said, “Congratulations Mercury, you’ve been drafted by the Dolphins.”

He told me Joe Robbie picked me because he said he liked me. He liked the way I ran and he liked my name. And that’s how I ended up in Miami.

I had gone to school in Texas, and that was my first touch of segregation, so to speak. It was institutionalized there. When I came to Miami, I didn’t see any of that. But what I didn’t know was what was going on with regard to the beach. I didn’t know that when blacks went to the beach they had to have a pass of some sort in order to justify being over there after dark.

Before Shula got here, there had been some segregation in the practice facility. And then he did away with that.

My first coach was George Wilson. When I got here I remember him saying he hoped for a 7-7 season. When you say you’re hoping for a 7-7 season, what you’re saying is, it’s OK to lose seven games. So that’s the mindset that he wanted to instill in us, which was mediocrity. And we didn’t even reach mediocrity.

There was a certain way things were run here. The Miami News, a newspaper here at the time, had a section in which I wrote an article twice a week called “Diary of a Rookie.”

I would talk about the things I saw in camp, and how these things were significant for the players and their relationships. Keep in mind, this was 1969. No blacks went to Alabama, Tennessee, LSU, anywhere in the Southeast Conference. So the players that came from there may have been experiencing for the first time having to play with black guys on the same team.

When I came in, I noticed we had segregated rooming. It was like Archie Bunker said: “Because whites got to be with whites, and coloreds got to be with coloreds.” That’s what we had then.

So I wrote about this. One day I was in the shower, and I noticed that the white dudes, their water’s coming out like Niagara Falls. And I went over and saw the black dudes, and their water’s trickling like it’s coming out the side of a mountain.

So I went over there and started washing myself. These guys went, “Hey rookie, what are you doing?” I said, “I’m taking a shower, just like you.” One said, “What are you doing? You’re supposed to be …” I said, “No I’m not. I’m supposed to be right here, taking a shower. Because I just came off the same practice field you did. And I got the same dirt on me that you do. And I’m washing it off the same way you are.”

And the dudes who had never been around black ballplayers, they had their expectations that they brought with them as well. So I wrote this article about the showers. I actually got flak from white guys and from black dudes. They criticized me and accused me of starting trouble because I talked about it. I wrote the article but the Miami News wrote the headline. The headline was, “De Facto Segregation in Dolphin Camp.” Half of these guys didn’t know what that meant, but they knew it didn’t mean something good.

I was in the throes of both groups. Neither group understood what was going on, except that they wanted to defend their side. They were settling with being who they were in that space. The coach was one of those types of people from that era, who played along with these expectations. We had a guy by the name of Norm McBride, who was a linebacker. This guy was really good, but his wife was white. They cut him. And he was their fifth round draft pick. Just because they didn’t like the idea that his wife was white, and he was black. And that’s in 1969.

We never reached mediocrity in ’69. We went three, 10, and one. Enter Don Shula, in 1970. And a lot of things changed at that point. That was the first year of the merger, so the old AFL was officially gone, and it became the AFC and the NFC. The format changed, and it became the new National Football League. Shula came here and the first thing he did was put Paul Warfield, a black player, and Bob Griese, who is white, together as roommates. He brought in a new era, that it’s about the football and what we’re supposed to be out there as the team.

Once, I said something about race, and he said, “Hey, you know I’m not like that.” And I knew he wasn’t because he only cared about one thing, and that was winning.

It was a rebirth of what the game would be, in terms of how it looked if everybody just played without the stigmas that came from the past. Because at the end of the day there’s only one race, and that’s the human race. The reality is somebody made that stuff up, and we’ve been trying to get over it ever since.