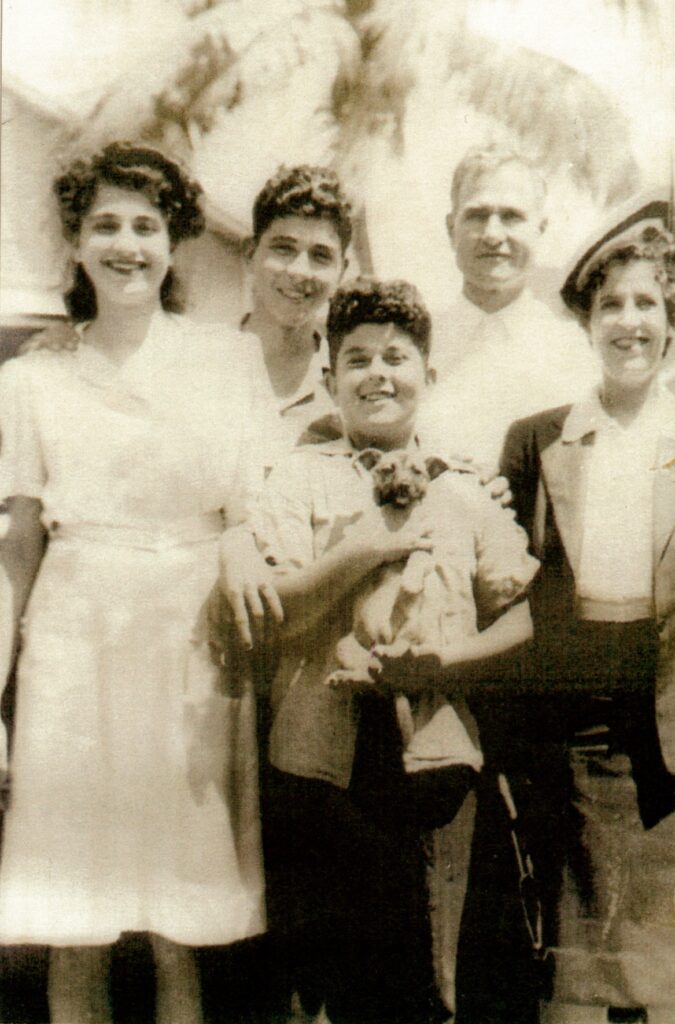 My dad, Mike Nola, came to this country from Lebanon in 1911 and peddled merchandise door-to-door along the Florida-Georgia border. He served in the Army during World War I, which earned him United States citizenship.

After the war, he returned to Lebanon to marry my mother, Chafica Sawaya. Upon returning to Florida, they opened a grocery store in Live Oak. After their first child died in 1925, they moved to Miami and opened a grocery store on the corner of Northeast Second Avenue and 22nd Street. They lived in an apartment near Biscayne Bay.

During the 1926 hurricane, the bay flooded their apartment. My dad put my sister, Josephine, who was several months old at the time, on his shoulders and walked to higher ground. The store was damaged and merchandise was scattered in the street. The neighbors gathered the salvageable merchandise and returned it to my dad. The wholesalers also restocked him, which helped him recover. He was able to open another store on the corner of Northeast Second Avenue and 25th Street. There is still a market there today.

At the beginning of the Great Depression, my dad went into the hospital for surgery. During his time in the hospital he let two neighbors, who were brothers, run the store for him. In their attempt to impress him, they put all the money they took in into my dad’s bank account, and they charged the groceries. Unfortunately in a tale all too common during the era, the bank failed and all the money was lost. Again, the wholesalers restocked him on credit, and he was able to survive.

I was born in 1930. In 1932, my parents built our home on Northeast 25th Street between Second Avenue and what was then the Florida East Coast Railroad tracks. It was a classic Miami bungalow built of concrete block and stucco, with a screened porch all the way across the front.

The construction cost was $3,000, and the lot was $600. My mother lived in that house until her death 60 years later. My parents never owned a car. The streetcar ran down the middle of Northeast Second Avenue, and it went to wherever we needed to go. One day, my brother Willie and I were taking the streetcar to town to see a movie that cost nine cents; we were counting our money and came up a penny short.

An elderly African-American lady overheard us and gave us the penny. It was an act of kindness I have never forgotten. Sometimes, after seeing a movie, my brother and I would walk to the aquarium at the North end of Bayfront Park. The aquarium had been built into a ship, The Prins Valdemar, which had sunk in Biscayne Bay in January of 1926, and was refloated later and turned into the aquarium.

The admission was 25 cents, which we did not have, but the attendant would sometimes let us in for free.

After the aquarium, we would walk back toward Flagler Street to Pier 5, to see the afternoon catch. About 30 charter fishing boats lined both sides of the pier, and the catch was always awesome.

There were no fishing regulations and “catch and release” was not yet practiced. The skippers kept everything they caught and displayed it on the dock to advertise for the next day’s charter. Once they brought in a 10-foot manta ray.

Biscayne Bay was my playground, and I spent many happy days catching snook and Jacks from the County Causeway (which was later renamed MacArthur Causeway) and catching pompano in a cast net from the Rickenbacker Causeway.

The bay was not always as nice as it is today. In the early days, raw sewage poured into the bay from sewer lines that ran under each street leading to the bay. We did not eat fish from the bay in those days. During WWII, there were many months when the bay was covered with a film of black oil from ships that had been torpedoed off the coast. Then after the war, there were several years when the water was muddy from dredging being done to even out the shore line, and to dig deep canals to make waterfront property.

But the bay did survive to become the beautiful place it is today.

Before Interstate 95 was built, Northeast Second Avenue was a busy thoroughfare. The Budweiser Clydesdale horses, pulling a beer wagon, used to come down Second Avenue and stop at all the taverns.

Before homes were air conditioned, it was a thrill to go downtown and walk past the open doors of the Olympia Theater and feel the cold dry air pouring out. At the Olympia, you could see a first-run movie and a live stage show for 50 cents. In 1956 I remember seeing Elvis Presley there, live on stage for $2.

I attended Miramar Elementary, Robert E. Lee Jr. High and Tech High which later became Lindsey Hopkins Vocational School.After my dad died, I ran the grocery store until I entered the Army in 1952. When the other GIs talked about their hometowns, I remember how proud I was to be from Miami and actually felt sorry for those who were not.

I met my future wife, Grace Geraci, when she was our across-the-street neighbor on Northeast 25th Street. We married at St. Rose of Lima Church in Miami Shores. Soon after, I took a job in the space and rocket industry, eventually settling in Huntsville, Ala. I retired from NASA 36 years later.

During our early years in Alabama, when our three children were young, we would return to Miami twice each year to spend time with family, often arriving late at night. It was always a welcome sight to see the red blinking lights on the radio towers that line U.S. 27 coming into Northwest Miami.

After retiring, we headed back to Florida and were going to work our way to Miami to look for a place to spend the winters. We didn’t make it past Stuart and have had a home there for 18 years.

We visit Miami often and are in awe of its growth and beauty. It has come a long way from the city of 150,000 when we were young.