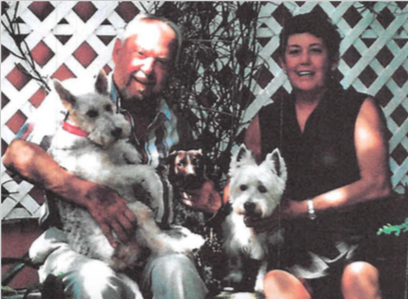 I was born in Coral Gables Hospital on Douglas Road.

As a young girl, I remember Douglas as being a horrible road filled with bumps and holes. The problem was that Douglas Road was the dividing line between Coral Gables and Miami. Neither city wanted to repair “their half of the road.” It was finally fixed when the road became a county road.

My father had come from Georgia with his family, and my mother had come from North Carolina with her family. Both families had come to Miami to provide a better life for their family. My mother and father met and got married in January 1942.

We are members of the Miami Zoo and every time we visit the zoo, my mind goes back to the Crandon Park Zoo. As a child, the Crandon Park Zoo was an enchanting place to visit. Not only were there the animals, but it had a train and a carousel and little boats in the water that we could drive!

My father died March 1, 1951, from the effects of juvenile diabetes. I was eight, and we lived with various relatives so that my mother knew that we’d be safe while she was working.

The house we lived in with my aunt and uncle was wood frame covered with coquina rock. One of my favorite memories was of a hurricane season. My father (before he died), my uncle and grandfather had worked for a company called City Ice Products. The plant where the company made blocks of ice was solidly built so when a hurricane threatened, we moved in with all the other families — bringing quilts, blankets, flashlights and portable radios. For a 9-year-old, it was marvelous adventure.

My childhood of moving from family to family helped me learn to love Miami’s many aspects. I went to Coral Gables Elementary and remember you could rent horses at what used to be the bus station downtown. I went to Olympia Heights Elementary in West Miami, when there wasn’t much past the school if you drove west on Bird Road. I also went to Curtiss Elementary in Miami Springs, where our house backed up to a huge field where we used to sit and watch carnivals setting up.

When I was in the ninth grade, our mother thought we could be alone for a short time so we rented one side of a duplex in Coral Gables. Right down the street was The Coliseum, which during my childhood was an ice skating rink and then a bowling alley. Imagine Miamians ice skating! None of us were very good. An apartment building is there today with a large Publix on the ground floor.

Shenandoah Junior High, which I attended in the seventh, eighth and ninth grades, was a three-story building. I remember as a seventh-grader that I was petrified of the huge building and that I had to climb to the third floor for classes.

The dream of my life was to attend Coral Gables Senior High School like my cousin did, and I did, for my sophomore and junior years. It was during my sophomore year, while some friends and I were eating lunch off campus at our favorite “dive,” that we heard the news that Buddy Holly and the Big Bopper had just been killed in a plane wreck. We were devastated.

My family moved again during my senior year and I graduated from Southwest Senior High School in 1961. We might have been the first complete graduating class. I knew I would not be able to go to college, and there was no Miami Dade College yet. So I took shorthand and typing to get a job. My student counselor got me an interview with The Keyes Company, a real estate company in downtown Miami. As they say, the rest is history.

We got paid on the 15th and the last day of the month. My monthly net was $161.48. Bus fare downtown was $20, and I gave my mother $100 a month to help with expenses. What was left, I would splurge and have lunch at the Walgreens cafeteria on Flagler St. opposite the Olympia Theater.

I’d taken three years of Spanish in high school and when Cubans started arriving, I was the only person in the company who spoke any Spanish. I got all the calls. “Habla muy despacio,” I would say.

Another memory was standing on the 19th floor of the Ferre Building where our office was located on Biscayne Boulevard to watch train after train full of army equipment and soldiers heading through Miami to prepare for the Cuban missile crisis.

The Keyes Company is where I met my husband, Fred. Our first date was to the Playboy Club and, of course, that doesn’t exist anymore. We saw Frank Sinatra at the Fontainebleau and Danny Thomas at another hotel. I felt like I was living the dream life.

My husband’s first wife, who passed away in 1959, was Cuban, leaving their three children. Her mother, “Mama,” came from Cuba to help Fred, and when we were making plans for our wedding, we realized that our Coconut Grove home, with only 3 bedrooms, wasn’t big enough. So we added a fourth bedroom. “Mama” lived with us for 23 years until her passing in 1989. We adopted our fourth child in 1971. Now we have eight grandchildren.

Fred and I have been lucky enough to travel and see beautiful places all over the world. But when we come back to Miami we look at each other and say “Why would anyone not want to be here?”

My husband and I are both bilingual. We love that we are able to enjoy the diversity of our city. We embrace daily the changes to our city. When I think of Miami as my city, I think about Gloria Estefan who was interviewed once and they asked her if she was Cuban. Her answer was, “No, I am a Miamian.”

Thank you, Gloria Estefan for understanding what it is to be a Miamian. I was born here and I would never want to live anywhere else. Why would I?