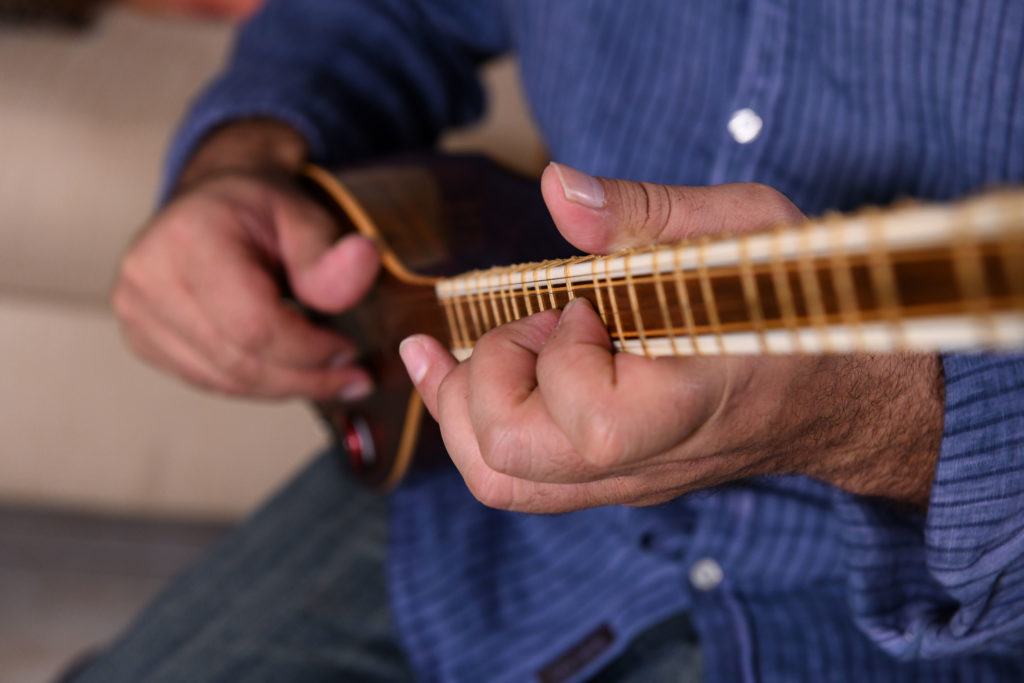 Born in Tehran, Iran, Reza Filsoofi is an instrumentalist, singer, and composer specializing in Iranian music. Reza refined his musical talents under distinguished teachers and mastered multiple instruments, including santoor and setar (stringed instruments) and daf and tonbak (percussion instruments). Now a South Florida resident, he shares his music as a teacher, recording artist, and performer, collaborating extensively with various groups and musicians in Iran and across the United States. Reza directs Caravan Ensemble, the first Iranian traditional music ensemble in South Florida.

The following is from an interview HistoryMiami Museum conducted with Reza Filsoofi in 2018.

1. What is your name and where are you from?
My name is Reza Filsoofi. I was born in Tehran, Iran. However, I grew up in Kashan, which is a smaller but very historic city in central Iran. I moved back to Tehran when I was fifteen years old and lived there until I left for the United States in 2001.

2. What music traditions and art forms do you practice?
I play Iranian music. I call it “Iranian music” because it includes traditional, folk, and contemporary music of Iran.

3. How did you learn these traditions?
I started exploring these traditions when I was eleven years old. My father has been a great source of inspiration throughout my musical journey, though he is not a musician himself. He is a general surgeon but has great passion for music. He sent both my brother and me to Tehran every summer to stay with my grandmother and also to attend music and English classes. My love and passion for music began then, and it has never ceased. I was lucky to meet the great masters of Iranian music in Tehran, which was and still is the capital of art and music in Iran, and I learned from them.

4. Tell me about the instruments you use.
Initially, I started playing the santur (or santoor), which is a melodic instrument similar to the hammer dulcimer, and I continued on with the tombak (or tonbak), which is the main percussive instrument in Iranian music. Then I got my hands on another major percussive instrument called the daf, and finally, I fell in love with the setar. The setar is part of lute family and probably the sister to the Indian sitar, and both are the common ancestors of all lute instruments around the globe. The setar is the most delicate and intimate instrument in Iranian music.

5. Tell me a bit about the history of the music traditions you practice.
Classical Persian music is an ancient art form and one of the earliest musical traditions known today. Because of the geographic location and socio-political role of the ancient Persian Empire, Persian culture and particularly its music had wide diffusion, and it contributed enormously to the foundation of many other musical traditions in parts of Asia. When Persian music became associated with Islamic culture after the Arab invasion in the 7th century A.D., it began to travel throughout the Middle East, North Africa, and the Mediterranean.

6. How does the music you perform relate to the culture, religion, and history of Iran?
My music is inspired by folk and classical music, and it is a combination of different melodies and songs from different parts of Iran from North to South and from East to West. These melodies and songs have been collected throughout history and have influenced the core of the classical repertoire of Iranian music, which is now called “Radif.” Now they are inseparable in terms of concept, melodies, and rhythms.

I must say that spirituality is an essential part of Iranian music, and thus it is part of my practice. As in all musical traditions around the world, religious ceremonies and beliefs find their way into music, and they have great influence on the progress as well as the retrogression of music. Some music has been banned periodically in the course of history, and still today, in Iran, there are restrictions placed on women singing.

The music I play functions as a spiritual tool for me, as it has throughout history in my culture. It is through the music that one reaches for the sublime. It is not so much a recreational activity as folkloric and popular music is, in which the society as a whole participates. It takes a certain degree of attention and focus to connect with it.

7. Tell me about the Iranian community in South Florida.
I have been living in South Florida for the past sixteen years. I don’t know the exact number of Iranians who live here, but I have heard that there are around three to four thousand. Our community is very educated and has adapted to U.S. culture while embracing our own cultural heritage. There are a large number of Iranian students here who currently study at FIU, FAU and UM, and they are contributing to and serving the wider South Florida community. Most of our fellow Iranians in South Florida participate in one or both of the two Iranian organizations – the ICS (Iranian Cultural Society) and the IAF (Iranian American Foundation) – and they meet periodically and keep their network through these organizations and the events they offer.

8. If you could share three aspects of Iranian culture with the world, what would they be?
Poetry, music, and Persian mysticism are the most important aspects of our culture. Richard N. Frye, an Iranian Scholar, once said, “Everyone in Iran is a poet”, and that is true because you never see anyone give a speech without quoting part of a poem or using a line of poetry as an expression. Almost everyone, especially in Iran, cites poems regardless of his or her class and education. Because of its importance, it is not surprising that the singing of poetry is central to Persian musical culture and has had an important role in developing and preserving Iranian classical music.

The content of most Iranian poetry is related to mystical narratives, the desire for the beloved, and the search for meaning in life, and therefore, it has always been a way of spiritual practice. Both poetry and music have collectively served this purpose.

9. What do you value most about performing music?

I deeply value and really cherish the fact that music brings people together. The impact of music on the human connection and communication makes me feel humble. When someone plays and someone else listens, the magic happens. People forget about their differences, and there is a moment of unity and harmony.

10. Why do you practice these music traditions?
It is embedded in my soul and it is an integral part of who I am. I love it with all the cells of my body. It is also what connects me to my past, while it provides me the joy of the present. My music is the love of my mother and the kindness of my father and the generosity of the land that I have come from, a gift that I am fortunate to share with others.

Through my practice, I hope I encourage my audience to get to know the Iranian people and culture and their many contributions to humanity. I do hope that the sound of my music will take them beyond the immediate stereotypes that have created a wall between our two countries.