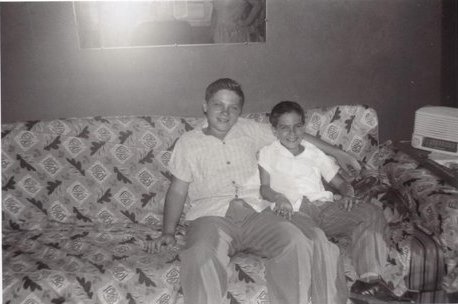 We came to Florida in 1952 to join my mother’s parents, who had moved here in 1950 to escape the cold winters of Newark, N.J. My parents sold their luncheonette in Newark, packed up the 1949 cordovan Plymouth station wagon, and we drove down in March.

No Interstate 95 existed back then and we even had to take a ferry to cross a bay in Virginia. We made it to Miami Beach and set up housekeeping in an apartment, which is still there today on Third Street and Collins Avenue.

My parents then bought a small grocery store in Miami at Southwest Sixth Street and 12th Avenue and called it “Pete and Lil’s.” It was right on the corner with only street parking. They sold groceries, milk, bread, sodas, and it even had a meat counter.

We moved to a one-bedroom apartment on Southwest Fifth Street between 11th and 12th avenues. I slept on a sofa in the living room and my brother Jerry on a day bed, also in the living room. That place is still standing, too.

Back then, the area was not known as “Little Havana.” Most of the people in the neighborhood were from the South, mainly Alabama, Mississippi, and Georgia. In fact, there were areas known among locals as “Little Alabama” and “Little Mississippi” because of the large numbers from those states.

Many people have one teacher they feel has changed their lives and mine was my fourth-grade teacher at Riverside Elementary, Mrs. Kay Culpepper. She instilled in me that I could do better.

Years later, when I was about to graduate from Miami High as salutatorian, I went back to see her before I went off to college . In 1976, when I moved back to Miami after being away since 1961, I ran into her at the old Miami Zoo and we immediately recognized each other and hugged.

After Riverside, I attended Ada Merritt Junior High from 1955 through 1958. Even then we had a few refugees from Cuba, but they were escaping the Fulgencio Batista regime. Key Biscayne had no junior high then so students were bused to Ada Merritt. It was a rough school and fights before school were not uncommon. Academically, however, the school was excellent.

I played softball and baseball at Riverside Park, which was right across the street from Ada Merritt. I took the bus home from school but I could ride my bike everywhere. In those days, traffic was much lighter and I remember riding down Southwest Eighth Street and even South Dixie Highway without much worry. We would ride over the bridges to downtown Miami, flying down the steep slope of the bridge, whooping it up.

It was a great time to be in Miami. It was a slower pace than now. You could actually leave your house unlocked without much worry. The side streets were so narrow that with two cars going down the street, one car had to pull into a driveway area so the other could pass.

In junior high, I sold The Miami News on the busy corner of Southwest Eighth Street and 12th Avenue. I would walk down the lanes of traffic to sell the paper but also go into nearby stores and bars to sell. The “Blue Streak” was the edition that The News put out in the afternoon. The paper was five cents on weekdays and 15 cents on Sunday. I got two cents to keep on weekdays and five cents for the Sunday edition.

In high school, I delivered telegrams for Western Union on my bicycle. The main office was on Northwest Second Street, just off North Miami Avenue and around the corner from Channel 4 (WTVJ), which was the first station to bring TV to Miami. Reception was brought by a real cable down the coast, not like the satellite cable today. It was not uncommon to lose reception due to “cable interruption.” I can still see those black-and-white images of Ed Sullivan, Red Skelton, “Gunsmoke” and locally, Ralph Renick of Channel 4 News.

I delivered telegrams all the way north on Biscayne Boulevard and south to The Roads neighborhood. I also delivered to many of the buildings downtown, like the DuPont Building and the old Everglades Hotel. The Florida East Coast Railway main station was nearby, just behind the Dade County Courthouse, so traffic was always heavy.

After Ada Merritt, I went to Miami High. In those days Miami High was the best in football in the South, and that made it the best high school because football was “king.” In fact, we won the mythical high school national championship in 1961. To this day, when I meet someone who went to Miami High, there is an immediate connection, difficult to describe. It is the kind of feeling that brought back nearly half the class for our 50th reunion in 2011.

I was here for the jubilation when Batista fell in 1959 and the town was filled with blaring horns from cars riding through the streets filled with cheering people. I was also here when thousands of Cubans made their way here after Fidel Castro revealed he was a Communist.

After graduating, I left Miami in August 1961. My parents moved back to New Jersey in November of that year, but I never lost that feeling that Miami was my home. I returned here in 1976 to go into medical practice. Certainly, it was a different city with a different beat, but I knew I was home.

Miami was never “a sleepy Southern town” before 1961. It was always a vibrant town, even before the refugee influx, with only the music changing over time. It was different music, but still the “Magic City.”