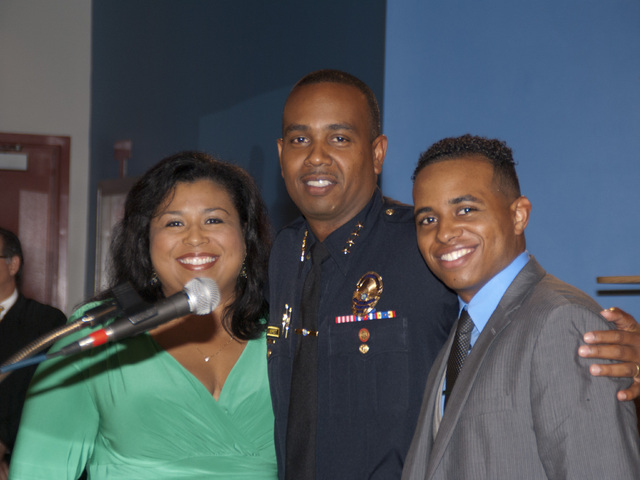 I was born in Georgetown, Guyana, which is the only English-speaking country in South America.

When I was 6 years old, my parents migrated to Toronto. I started school in Canada, and it was my second-grade teacher who was influential in my love of education at an early age.

You see, I had an accent when I spoke English since I am from Guyana and I did not want the other kids to make fun of me. So I kept quiet because I was intimidated to engage with other students and felt out of place.

My teacher spoke to my parents and let them know that unless I got with the program I was going to be left behind and I was going to repeat the school year. So she suggested that I attend summer school to improve my deficiencies. To this day, I am thankful to this teacher from Jamaica who was able to see through my shyness and understand what I was going through.

Memories like those have also helped me become the person I am today. I remember that my love for police work came from that tall police officer who visited my third-grade classroom for career day. His uniform and command presence stood out the most and left a visual imprint.

I also had a little more push since we lived close to the police academy and every day when I got home from school, I would see the recruits exercising and practicing. I knew that when I grew up I wanted to be a police officer who would be able to help others.

In 1985, I came to Miami with my family, and it was here that I started my public service career. One year after graduating from Miami Southridge Senior High School, I enlisted in the U.S. Army and spent three years as an infantry soldier. I then was hired by the State of Florida as a correctional officer at South Florida Reception Center and I was subsequently hired by Miami-Dade Schools Police Department as a police officer.

Education has always been an emphasis in my life, and I graduated from Florida International University with a bachelor’s of science and from the University of Cincinnati with a master’s of science. I am also a graduate of the prestigious University of Louisville, Southern Police Institute Command Officers Development Course.

I have been blessed to be able to work and train with multiple agencies responding to critical incidents and have offered countless workshops in the area on youth violence, gang awareness, school safety, weapons of mass destruction, emergency management and tactical training. I also teach for the University of Phoenix and FIU.

Fifteen years ago, I worked with Miami-Dade Schools Police. I was working there in the position of captain when the City of Miami Police Department offered me a position as police major to lead and manage the Miami Police College and certainly this was something I could not refuse. I saw this as an opportunity to grow and learn.

Then I saw the chance of rejoining the Miami-Dade Schools Police Department as the chief. I felt that this was an opportunity I could not pass up and also would finalize my law enforcement career and personal mission. I was working for City of Miami Police Department when Superintendent Alberto M. Carvalho offered me a chance to lead the police department for the fourth-largest educational district in the United States.

The Miami-Dade Schools Police Department is currently the seventh-largest law enforcement agency in Miami-Dade County with an authorized strength of 180 sworn personnel. One of the main objectives of the department is to provide a safe learning environment that promotes good health and is free from violence, weapons, hazards, vandalism and substance abuse.

The Miami-Dade Schools Police Department not only deals with incidents of a criminal nature, but the officers strive to be positive role models for the students and prove there is an alternative to crime or violence. The officers play an active role in the prevention of crime on our campuses.

After Hurricane Andrew, I ended up in Broward County with my wife and son. All these years I have been working in law enforcement, my wife has been the rock that has held our family together. She has made sure that my son was properly prepared for school along with participating in social and sporting activities.

My son just recently graduated from FIU with a bachelor’s in public administration and he has chosen to pursue the career as a law enforcement officer. This is a noble calling since it takes a special person to take on these responsibilities in today’s society.

When I left Guyana with my parents and sister, I never imagined I would be where I am today. My parents had the strength to migrate from not just one country but two countries. The opportunity to swear in those new officers made me realize how lucky my family and I are.

We are lucky to live, work, and recreate in a beautiful city with people from many different cultures, which makes me realize that our differences can be the glue that holds us together.

This endeavor to help others has led me to more than 24 years of public service at the federal, state, municipal and county government levels. I can truly tell everyone that great things are made in America, and this is definitely the land of opportunity. For if it was not for the emphasis on education and good family values, I could not be where I am today.