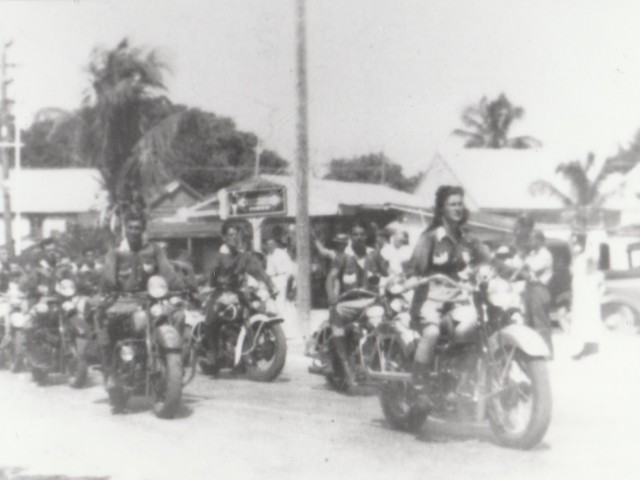 In various cultures, grandparents have been seen as a rich treasure. A grandparent’s life is one to be mined for the depths of riches shared in the form of unique stories.

One example was the late Winifred Ann Jackson Herzog, my own beloved grandmother. This is an account about how she led a motorcycle club across the $30 million Overseas Highway to Key West as part of the official opening ceremonies of July 2-4, 1938.

My grandmother was born in Richmond, Virginia, in May 1919. From her early years, Nana, as I called her, had many wonderful anecdotes which she shared before she passed in 2008.

Foremost among these was the role she played in the Key West festivities of July 1938. It was remarkable from both a historical and societal perspective. She helped Miami to do its part in carrying out a three-day holiday dubbed the “Gala Fiesta” in local newspaper accounts.

That year, the nation and particularly the Key West area was still suffering from the devastating effects of the Great Depression. The national unemployment rate was 19 percent. The morale boost from the manufacturing drive of World War II was just over the horizon as was the “Rosie the Riveter” campaign to promote contributions of women in shipyards and factories.

It was thus no small feat which occurred on Saturday, July 2, 1938, when my grandmother was 19. That day was when she set out to lead the Miami Motorcycle Club along with a special motorcade of city residents in making the trip from Miami to Key West. Nana rode the lead motorcycle, which was an Indian Four model.

Just how did she find herself leading this motorcade? As recalled by my family, Nana had met John Hays Long, my future grandfather, some months prior to this event. At the time, she had a job “hopping curb” at Pixie’s Ice-Cream Parlor. She served customers while wearing roller skates.

Nana had close friends named Thelma and Doris. Their brother, James, had given her a “basket case” motorcycle to take in for repair. The business she chose for service was none other than Long Motorcycle Sales in Miami. That is how she met John, the founding owner of the business and her future husband. (They would end up married the next year.) After meeting John, my grandmother grew interested in motorcycle club activities.

A few months later, local newspapers prominently featured the meticulous planning leading up to the three-day fiesta. The Miami Herald of July 1 reported that more than 1,000 people were expected to participate in the Miami motorcade sponsored by the Key West Club of Dade County. My grandmother led this group when they started out for Key West at 1 p.m. from the intersection of Northeast 55th Street and Biscayne Boulevard.

The Miami Daily News of July 2 reported: “This was the largest single motorized caravan expected to pass over the new highway during the celebration. Headed by a special motorcycle escort, the nomads of the open road traveled at a moderate pace through lanes of curious onlookers who assembled in the small communities along the route.”

In setting the context, it is important to consider details shared by my grandmother years later. In the 1990s, Nana told me that the motorcycle club members wore unique garb when you consider the perceptions of bikers in more recent times (such as the Marlon Brando look). Each club member wore a scarlet tunic or shirt along with khaki jodhpurs and riding boots.

Their mission was clear: to lead Miami residents in joining official ceremonies marking the occasion. This in turn provided a much needed “shot in the arm” for the state and nation. The festivities included inspections of U.S. and Cuban warships (with no cameras allowed), wrestling matches, a motorboat regatta, fireworks displays, and all-night dancing at a special “queen’s ball.” Amateur boxing matches were even held between Miami and Cuban fighters. The referee presiding over the fights was Ernest Hemingway.

Nana led the Miami motorcade for the approximately 130-mile trip from Miami to the awe-inspiring backdrop of the Bahia Honda Bridge, some 65 feet above the water. The ribbon cutting was held at 5 p.m. on July 2. The mayor of Key West, state and federal officials, and a representative from the Cuban government were in attendance. Bernice Brantley — the woman who had been previously designated “Miss Key West” — was given the honor of cutting a 60-foot, red, white and blue ribbon that stretched across the bridge.

The motorcade participants then drove the remaining 50 miles from the bridge to Key West, arriving there at approximately 6 p.m., July 2. As my grandmother resumed the lead position, more excitement awaited ahead. The Miami Herald of July 3 reported: “Led by members of the Miami Motorcycle club, the mammoth parade moved into Key West. From the entrance to the city limits on Roosevelt Boulevard down the broad expanse of this thoroughfare to Division Street and then on down to Duval Street the motorcade was greeted by a wild, cheering throng.”

The July 4 Herald reported that 10,000 people lined the streets to greet the motorcade. The importance of the festivities was underscored as follows: “Key West, once the state’s largest city, lost its importance years ago and its industries slipped away and was rendered destitute by the 1935 Labor Day Hurricane that destroyed the Overseas railway.”

Looking back now, it is interesting to note that Long Motorcycle Sales has continued to stay in business until this this day. During World War II, Nana helped to run the dealership with help from her father, William “Bill” Jackson. They kept the dealership running while Nana’s husband, John, served in the U.S. Army. In 1946, Nana and John were divorced. Today the business is located at 800 NW 12th Ave. in Miami and the family legacy is carried on by John A. Long, my uncle.