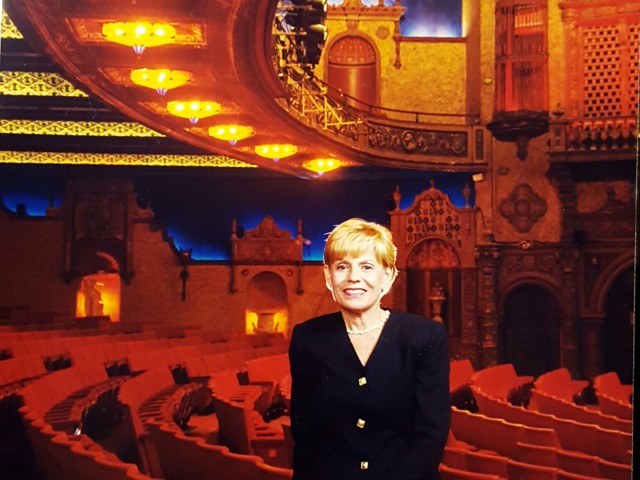 In the 1920s, the film industry was beginning to invest in “sound” for movies. Impressive theaters were built and audiences came rushing to escape the reality of life. Movies and vaudeville drew thousands of people to these spacious, elegant buildings known as movie palaces, and Miami was no exception.

The Olympia Theater was one of them and she was the heartbeat of downtown Miami. Her lights were brilliant and kept their sparkle through the economic and natural crises of the times from the energy left by the many performers and stars who graced her stage.

Then the glamour and excitement vanished. The dazzle of the movies and the up-tempo of the vaudeville acts no longer thrilled the crowd. The stock market crashed in 1929; the ‘30s saw a hurricane disrupt the lives of Miami audiences. The Olympia’s seats were empty; the audience was gone. The halls were dark except for the ever-present traditional, single bulb, caged in steel standing near center stage and left to burn eternally. This light–the soul of the theater– never goes dark.
It is called the “ghost light.” There is a superstition connected with it that says a spirit floats through and haunts every theater, even Miami’s Olympia Theater. I know it exists.

With all its problems, the Olympia was destined to become a parking garage until millionaire businessman Maurice Gusman bought the theater, saved it from the demolition ball, and it became Maurice Gusman Theater, Center for the Performing Arts.

The theater’s rebirth began and the lights returned brighter and stronger than ever before. I came to Gusman as a Florida International University intern in the 1980s. Upon graduation, I was hired as an assistant to the managing director. I began my dream job on December 26, 1984. Downtown was quiet but I was intoxicated with excitement. This same feeling led me through the next 20 years of my life in a job I loved. Yes, it was filled with long hours but I gained priceless experiences, as well. I also discovered the value for details and contractual requirements unique to major stars. I reveled in the personal moments with these major stars, which I was privileged to see.

I like to call this “my Renaissance period” for it was that for both my beloved theater and me. It formed a lifetime of love for me and a rebirth for the theater as Miami audiences begged for a stage for world performers.

Edward Villella gave birth to the Miami City Ballet, forming a ballet company with local talent and New York dancers with a full week of performances; Michael Tilson Thomas auditioned musicians from all over the world to come to Miami to be a member of a teaching orchestra, the New World Symphony; and my boss created programs for the season of traditional jazz performers, such as Marian McPartland, Dave Brubeck, Ramsey Lewis and Carmen McRae to note a few. These programs brought music lovers to downtown to the corner of Flagler Street and 2nd Avenue.

I loved going to downtown Miami even though everyone told me how frightening it was. Strangely, I never felt threatened by the street people. I felt sadness for them but never fear. The dark streets and empty store-fronts did not intimidate me, nor did the dark of the theater. The “ghost light” was always on so I could stand at the top of the mezzanine balcony and look all over the theater as the light created unique shadows throughout this exquisite atmospheric theater designed by John Eberson in l925. The single stage light cast dramatic shadows on the proscenium arch making the sculptured faces and the carved stone gargoyles grotesque and macabre.

Remember I mentioned the “spirit that floats through and haunts” every theater. The reason I know it exists is because I did see it. Laugh if you will but I did. Here is what happened:

My boss loved to drop last minute projects with immediate deadlines on my desk to see if I could manage it. It was Friday at 4 P.M. He picked up his briefcase and as he left the office rushing down the back staircase of the theater foyer, he said “don’t forget, you have to feed the dance company on Saturday night two hours before show time. See ya.”

What was that? I yelled as I came out of my concentration over a contract and ran to the top of the stairway only to see his 6-foot tall body slip out into the backstage alley. As the door slammed shut, and I started back into my office I thought I heard something or someone but I knew I was alone in the theater. I stopped at the doorway, listening for a familiar sound but there was only the silence of the theater. Then a swath of light floated through the chandeliered balcony foyer making its way up the stairs to the mezzanine. I was not frightened. I was inquisitive. I believe buildings and houses have “energy.” I looked for reflections from 2nd Avenue traffic but there were none. I believe this kind of energy manifests itself in some way, especially if you are sensitive to its existence. I saw the spirit that floats through our theater. I never saw it again but what a beginning.

I love the theater, I love the ghost, I love the audiences and I loved my life at Gusman Center for the Performing Arts, now The Olympia Theater again.