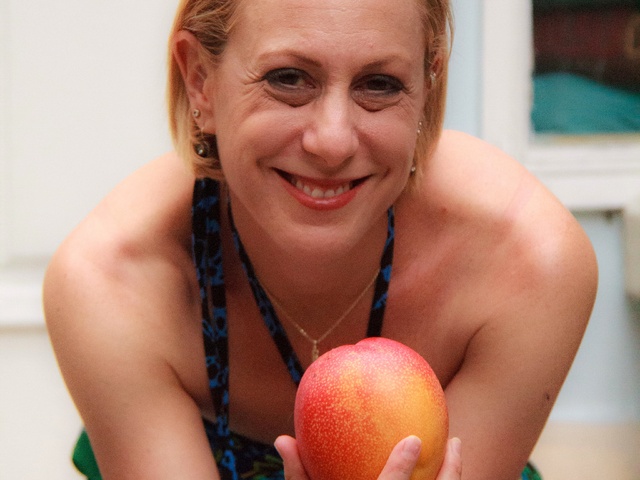 The homeless man knocked on my window while I was stopped at a red light on North Federal Highway, just east of the Miami Design District. He made the motion of hand-to-mouth, the one that says, “Feed me. I’m hungry.”

It just so happened that it was June, and in the middle of a heavy mango season, when eight of our 14 trees were throwing fruit at me as if we were playing a long, continuous and particularly juicy game of dodge ball. Because I never go anywhere without them, I had several Publix bags filled with fruit on the seat beside me. I rolled down the window and handed him one, bulging with the aromatic globes.

He was about to thank me when his expression turned suspicious. The overwhelming perfume of dozens of mangoes shot out of my car window along with the air conditioning. “Wait,” he said, “what are these?” He looked inside and his nose wrinkled. Then he handed the bag back to me. “No thanks. I don’t like mangoes.”

The light turned green at that moment and, with Miami’s notoriously impatient drivers honking at me, I didn’t have the opportunity — or, at this point, the charity — to explain that while he might be one of the few people in South Florida to disdain the world’s favorite fruit, perhaps he could trade them on the street for something else. I just shook my head and drove off.

This anecdote popped into my head when I woke up one recent morning and discovered a criminal act had occurred on my property the night before. Someone had stolen all the guavas from my tree, fruit that were still hard knobs of verdant acidity, but would any day begin transforming themselves into softer, sweeter and kinder versions. My dog walker, Jorge, and I were keeping a close watch — there were about 75, maybe more — waiting for that first tinge of yellow and hint of distinct aroma, caught somewhere between cat pee and tropical mold (but closer to cat pee).

Our vigil was for naught, because my tree has apparently been marked for a while now, and every harvest I’ve almost had for the past two years has magically disappeared. Worse, this time, the thieves didn’t just pick the fruit. They ripped off entire branches, the main arteries where the guavas had proliferated most, rather than take the time to tug them from what would have been, surely, their unforgiving stems.

Several weeks later, I came home from a weekend away to find that all of my low-hanging, early-ripening avocados had been taken as well.

Posting my losses on social media, I learned in response about the rumored “mamey wars” in the Redland region, where mamey sapote is so treasured that it has to be grown under guard. I heard about a fellow Miami Shores resident’s jackfruit tree, which was robbed of its Dali-esque fruit at 2 a.m. one night (a neighbor on a night shift caught the perpetrator in the act). I was given lots of recommendations about planting away from front yards and fences, and suggestions on how to espalier young trees so that they’re less of a target for the drive-by, rip-off artists who sell ill-gotten nighttime gains to fruit cart purveyors. It’s all good reasoning and sound advice, except that it comes far too late.

On the other hand, mango season is so prolific I wouldn’t notice if 500 pieces of fruit took a walk one day. I’d actually probably be grateful. But that rarely happens. Even the mango trees on the nearby properties that have gone into foreclosure remain untouched, the fruit decaying into the ground.

Indeed, as much as mangoes can foster love and lust during the first of the season, by the middle or end no chef, neighbor or homeless person within miles wants to catch a glimpse of me. I was even denied entrance to the Sunday poolside brunch at Hyde Beach in July this past year, where I was bringing mangoes for the kitchen, because the security staff considered them on par with groceries. As in, per the Terminator dude at the velvet rope (yes, for brunch, an element I’m still trying to figure out): “You can’t come in here with a bag of food.”

“No, you don’t understand,” I said. “I have a reservation for brunch, and I brought these mangoes for the kitchen.”

“No entrance with a bag of food.”

“This isn’t ‘a bag of food.’ These are beautiful, tree-ripe mangoes. From my trees. Picked by me. For the chef.”

No one asked for my reservation name, called for a manager or even bothered to turn around to talk to me directly, although it was obvious that they did consider me a middle-aged idiot. Very slowly, the same man said, “Ma’am, we don’t allow outside food to be brought in.”

I was, by now, angry and exasperated, not to mention hot, holding twenty pounds of mangoes in July and arguing at a velvet rope to a venue where I had been invited by the public relations firm for brunch. “Really, it’s not like these are potato chips. I hand-picked these for the chef. It’s mango season. Backyard growers like me do this. Trust me, it’s a Miami thing.”

Check and mate. I left the premises because, well, who would want to eat brunch there anyway?

But along with the lesson of not accepting brunch invitations at what is essentially a club, in Miami, I have learned, some kinds of fruit are valuable currency. (I wonder, had I been holding guava, would Hyde Beach security have parted the Red Sea for me?) Yet those fruit that are plentiful and common, no matter how well-loved, are like the old Italian lira: inflated, worthless. And at the height of season, you can’t even give them away, not even to those who have nothing at all. Including, it seems, a chef.