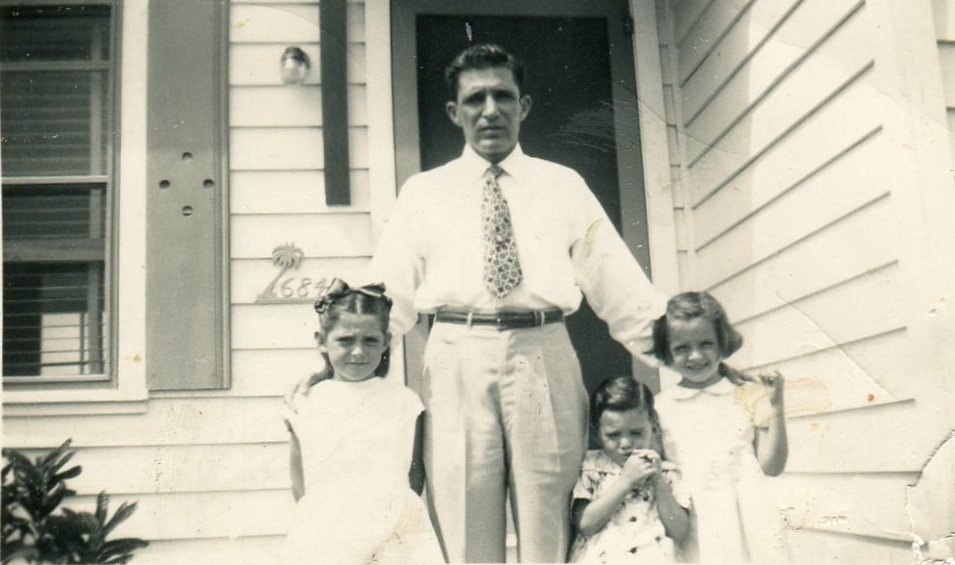 The migration of my family from Cuba to Miami began in the 1800’s, possibly because of the Spanish-American War, which caused many people to leave Cuba for Florida. One set of great grandparents went to Tampa and another to Key West.

Both of my parents were born in Florida. My Cuban-American father, Aldo Garcia, was born in Key West while his mother was visiting there. My Irish-American mother, Margaret McMillan, was born in National Gardens, Fla. They met in Ormond Beach where my father got his first teaching assignment after graduating from the University of Florida. My mother was one of his students.

After the bombing of Pearl Harbor, my father joined the Army Air Corps. He attended officer candidate training in Miami Beach. The graduation ceremony was in August, 1943 at the Miami Beach Golf Course, formerly known as Bayshore Golf Course. The golf course had been leased by the Army Air Corps as a training facility during World War II. When his tour of duty was over he and my mother moved to Miami where dad had a job teaching at Edison Senior High.

They had two daughters when they moved to Miami: me and my sister, and later had a son. They purchased a home at Southwest 39th Street and 68th Avenue, with the help of the G.I. Bill. There was a goat farm on the corner.

When we left home to go to Coral Gables or downtown Miami, my father would drive east on Bird Road to Red Road or 57th Avenue. On the southwest corner of Bird and Red was Allen’s Drugs, one of the landmarks that still stands. Turning north we would go to Coral Way and turn east. The ride along Coral Way under a tree-lined canopy is very much the same today.

We knew we were getting close to downtown Miami when we saw the birds circling the courthouse on Flagler Street – at that time the tallest building in the city. If you take the same drive today you won’t see the birds or the courthouse until you get very close, as it is dwarfed by skyscrapers.

Sadly, our mother passed away in 1948, leaving my father to raise three children under 6. He sent for his mother, my Cuban-American grandmother Anna Maria Garcia de Silva, who came to Miami to care for us.

When I was a child I remember looking in the phone book for our number and being surprised to see that there were five Garcias. One was my father and another was my uncle. No one could have foreseen the many pages of Garcias now listed in the phone book.

Abuela, or “Granny” as we called her, took us to Bayfront Park every Sunday on the No. 17 bus. The bus took a circuitous route past the house on Northwest Seventh Street and 22nd Avenue that is built of coral rock. At the park we would walk along the bay from the band shell to Fifth Street, pausing occasionally to climb trees. The band shell was where my sister and I performed a duet during a dance recital by Bunny Stirruz Dance Studio of Miami Springs.

At the end of Fifth Street, we watched fishermen as they brought in their catches of the day and filleted them for sale to the public. On Saturday nights, Granny would attend what we teasingly called “old folks dances,” which I think were held in the building now known as The Freedom Tower.

Another strong memory is of going into Burdines in downtown Miami to visit “Toyland” during the Christmas holidays. The excitement would startwith the first glimpse of the walkway decorated for the holiday that connected both sides of Burdines department store on the second floor.

Also, long before Krispy Kreme brought hot doughnuts to Miami, you could purchase one at either S.H. Kress’s or McCrory’s on Flagler Street. Christmas shopping for our teachers (usually Evening in Paris perfume) was always done at Shell’s City on Northwest Seventh Avenue, a precursor to stores like Wal-Mart.

The movie theater on Northwest 36th Street between 17th and 18th avenues, where we attended Saturday afternoon matinees, is now a discount furniture store. Warm summer nights were often spent outdoors under the watchful eyes of parents and grandparents who sat on their porches while children played tag, Simon Says, or red-rover red-rover. When the sun set we tried to catch fireflies in jars. It has been a very long time since I’ve seen fireflies in Miami.

In the mid 1950s we moved to North Miami, which seemed very far from Miami. Since then, other cities like North Miami Beach, Miami Gardens, Aventura, and Miami Lakes, where I now live, have incorporated. My siblings and I attended North Miami High School. It is the same school my children, who are fifth-generation Floridians, later graduated from.

It was while we were living in North Miami that the Cuban Missile Crisis began. I remember convoys of military vehicles, including tanks, driving south to Key West along Biscayne Boulevard. Because my father was bilingual, he was recruited as a translator to assist many of the Cubans who came to Miami in those early years. I have kept a gift he was given by one of the grateful immigrants he helped – a liquor bottle that through the endeavors of an enthusiastic artist had been changed into a Charlie Chaplin-like clown, complete with wooden shoes. While it has no monetary value, it obviously meant something to the giver.

By far the biggest change I have seen in Miami is the successful integration of the many immigrants who have arrived. The Spanish language that I learned from my grandmother has now become a dominant language.