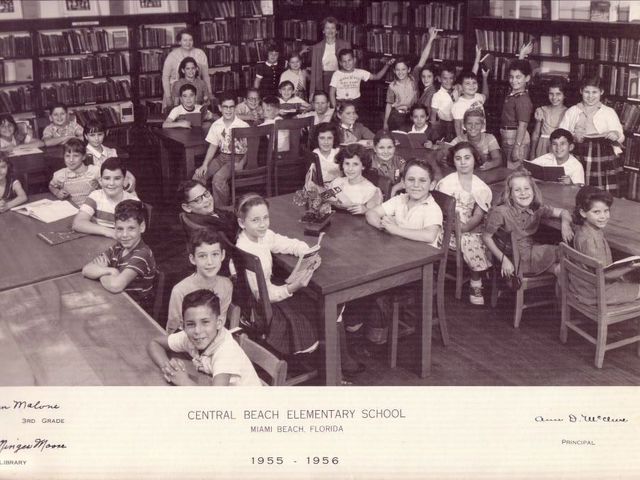 My parents both came to Miami Beach for work, my mother in 1936 and my father in 1939. They met while working together at a deli, owned by my great aunt and uncle (Mary and Dave Alper).

We lived on 15th Street, near Washington Avenue and the old Miss Ehrman’s dance studio. We were one of the first families to move to the very new Morton Towers. A lot of my family moved to Miami Beach soon afterward.

My grandmother Fannie Malschick, already retired, lived in one of those apartment/hotels on South Beach that now host the rich and famous. She played cards with her cronies, did group exercises on 15th Street and safely walked everywhere.

My uncle, Gilbert Malschick, worked at the Eden Roc as a bartender from the 1950s to the 1970s. My cousin, Allen Malschick, was a well-known Miami Beach photographer who took pictures of many celebrities who entertained at the hotels on Collins Avenue.

My father eventually opened his own deli with partner Phil Seldin (Raphil’s Deli on 41st Street). His customers included the famous and infamous. Before that, my dad owned The Little Inn restaurant in Miami, a popular hangout for soldiers and friends during World War II.

I attended Flamingo Park preschool, Central Beach Elementary, Fisher Jr. High and Miami Beach High School. Many of my friendships, born during those years, have stood the test of time and I am in touch and close to many of those “kids” today.

In 1960, the first wave of Cubans came to Miami Beach. All of a sudden a new culture was introduced, and we had tons of new friends. We spent the sweet years, as I now refer to my childhood, at Saturday afternoon matinees, shopping on Lincoln Road, and eating at Liggett’s or Wolfie’s. Friday night was dedicated to dancing at the 10th Street auditorium, and on Sunday, many beach parties were held at 14th Street and Ocean.

As we began to drive farther from the Beach, we hung at Fun Fair and the bowling alley across the street, Corky’s and Marcella’s Italian Restaurant, known for the amazing garlic rolls. We ventured even farther to the Coconut Grove coffee houses and playhouse.

I left Miami Beach after high school graduation in 1965, but my heart remains in the memories of those wonderful years. Our lives are richer for the experience and we have grown both up and together these many years later.