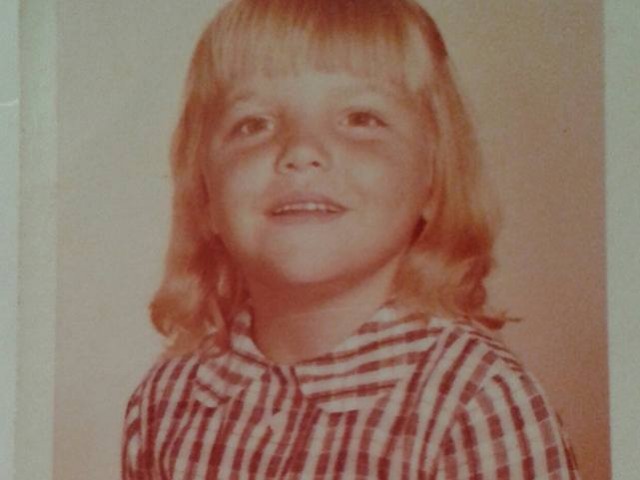 A child of the Florida sun, I lived in soft T-shirts and sandals. But here I was, walking with my mother to Van E. Blanton Elementary School, attired in a plaid dress and stiff Oxford shoes. September 1959 was a more innocent time; the terms “crack,” “pusher,” “grass,” or “weed,” surely would have conjured images of children playing on steaming sidewalks where brown summer grass and wildflowers pushed hopefully upward.

At registration, we were told by the principal that first graders’ hours were 8:30 to 12:00 noon for the first three months, and after that the school day ended at 2:00. She added that 6-year-olds should walk unaccompanied to school, as it built self-reliance. First graders were served a carton of Home Milk decorated to look like a house and picket fence, and home-baked cookies in the school “cafetorium” for $1.00 every two weeks.

Walking to school in second grade, I discovered dozens of buttons which read “John F. Kennedy.” Who was he? My teacher explained he was running for president on a platform of equal opportunities in housing, school and jobs for all. A wonderful idea, and it was exciting to follow my first election on TV!

In fourth grade, we had many new classmates from “Operation Peter Pan,” in which Cuban children settled in the United States, often not knowing if they would ever see their families again. I vividly remember the first two arrivals. One, “Angela,” was very shy. She wore the same outfit every day and only responded quietly if Spanish-speaking adults talked first, but she always worked hard on her studies.

Then there was “Maria.” We girls would marvel at her vast supply of rustling silk dresses and gold jewelry. She bubbled over with fluent English that her “Abuela” (Grandma) had gone on a shopping spree at Jordan Marsh in anticipation of her arrival, adding, “Abuela is taking me to New York and has arranged for me to have ham on the plane,” smacking her lips. I was insanely jealous!

There was a game we played every Friday called “7-up.” Seven students would randomly tap seven blindfolded students, then we’d guess which person tapped us by asking seven questions about hobbies and interests. Maria tapped me. I guessed correctly with one question about an upcoming trip. The normally happy, bubbly child burst into cries: “Cheater! You looked to see who tapped you.” I sobbed, “I did not, I recognized the swishing silky sound of your dress.” My teacher mediated: “I want you two to talk privately with each other and smooth things over.” We calmly conferred; Maria acknowledged, “I believe you didn’t cheat; my dress DOES swish.” I responded “Why do you keep bragging about clothes and jewelry and trips? You’re making the kids jealous.” She replied, “I’m envious of you all. You have lived here your whole life and I had to leave my home and might never see my relatives again.” I lovingly hugged and reassured her: “This is your new home and I’ll be your new best friend.” Our teacher then had us sit side by side for the rest of the year. We exchanged gifts of crayons and bubble bath. Maria exclaimed, “Together, we can color and draw beautiful pictures of the beaches in Miami and Cuba.”

In October 1962, we had to confront possible mortality. President Kennedy announced Cuban missiles were pointed towards the United States. A tense standoff lasted three weeks. There were simulated air-raids and we would dive under desks for cover; thankfully it was soon over. My teacher told us that, ironically, the brief crisis actually helped thaw some of the relations between nations, apparently for a mutual desire to preserve mankind. Meanwhile, I wrote poems about annihilation which I submitted unsuccessfully to the Blanton Bugle: “Mother is baking an apple pie, soon we all will die.”

November 22, 1963 dawned as an exciting day for me; I had no idea the day would end so tragically. All summer, I had practiced for a jump-rope competition, with Maria timing. Practice paid off, I won the prize jump rope! But sadly, just as school ended, someone shouted, “President Kennedy is dead. He was shot.” We all froze! Teachers admonished, “Go straight home. This is a national tragedy.” School was closed the following Monday. For one month, school flags were flown at half-staff with black ribbons. President Lyndon Johnson announced that he would carry on President Kennedy’s legacy with the 1964 Civil Rights Act. We all learned a lesson that could never be taught in a classroom: that one’s life can be tragically cut short, but grief and sadness can be channeled into helping their memory live on, by carrying on their good works.

Our school years at Blanton were finally coming to an end. Sixth graders were treated to a barbecue and swimming at Morningside Park and pool, equipped with a high-dive. I was afraid to dive but it was now or never! Slicing through cold, clear blue water, my young life passed before me. I had learned so much: reading, writing, math, elections, death and friendship. How you can make things happen; words can make an enormous impact. Crayons and paper can be transformed into beautiful pictures. Gasping when reaching the water’s surface, I heard my teacher exclaim: “Karin, hurry up. It’s time to go. But first, let’s have a rousing rendition of our school song.”

As onlookers gaped, we sang, “We’re loyal to our school, it’s here we learn and live, knowledge strength and beauty too, these to us we give, our teachers show the way to make our dreams come true, Van E. Blanton, Van E. Blanton, we all stand for you.”