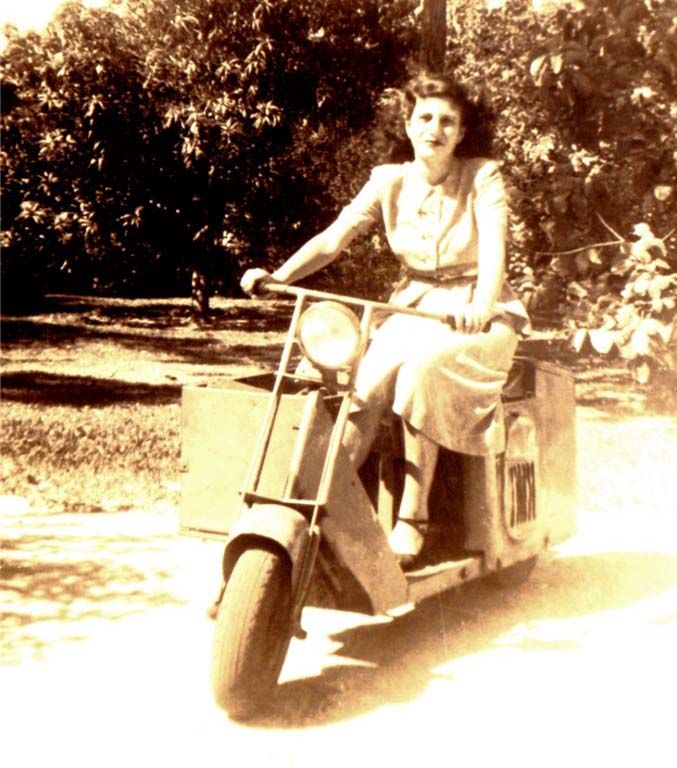 In December 1945, I got my first glimpse of the palm trees, beach umbrellas and hotels on Miami Beach. After six years of being exiled in England, I managed to get passage on a tramp steamer in Norway so I could join my family in Mexico. We had all been dispersed from our home in Germany by the Holocaust.

The North Atlantic was cold and miserable, but eventually we rode along the coast of South Florida in the Gulf Stream. It was delightfully warm, and I spent most of the days in my swimsuit on the captain’s bridge, looking at the coastline with his binoculars. That’s when I fell in love with this area.

At the time, I was “stateless” and knew that I could not get into this paradise. I was reunited with my family in Mexico after two weeks in Cuba. I lived in Mexico City with my parents and two sisters for 2 ½ years and learned to speak Spanish. My sisters immigrated to New York City, and I planned to join them there.

When I did get my U.S. visa, I looked at a map and concluded that my dream land (South Florida) was almost on the way to New York. I decided to see if I could get a job and stay in Miami. At age 23, I arrived with $200 and a suitcase full of out-of-fashion clothes. I landed a job as an English/Spanish secretary, even though my first languages were German and French. My stay in Mexico had paid off.

I rented a garage apartment at Northwest 76th Street off Seventh Avenue. I rode the bus to my job at the airport. When the bus route was discontinued, I bought a motor scooter. There were no expressways, so I could putt-putt my way to the airport every day. My only problem was going to Hialeah via the 103rd Street overpass. The scooter barely made the “hill.”

Every weekend, I drove over the 79th Street Causeway to the beach. The police stopped me quite often. I was terrified because of what I had experienced as a Jew in Germany. Eventually, I learned that the Miami police were just being friendly and wanted to chat with a young woman on a motor scooter. I saved my money, and after a year I bought a used car.

I worked for a freight-forwarding company and managed it for years until I finally got the title of manager. I was one of the first women in that position. My name is now on a black marble monument at the entrance to the Port of Miami. The monument is dedicated to the pioneers of the freight business in Miami.

When I got married, I was glad to change my name from Wiener to Hoffner. I was originally from Hamburg, Germany, and didn’t want to be known as a hamburger or a wiener. I remember a neighborhood restaurant called Jumbo’s on Northwest Seventh Avenue. I believe it still exists. We liked Junior’s at 79th and Biscayne.

Occasionally, my husband and I went to Tropical Acres in Fort Lauderdale. That was a very special treat. Our shopping area was Little River. There was a nice restaurant called Watson’s and, of course, the movie house. For movies, we also went south on Biscayne Boulevard to the Mayfair.

At times, I shopped downtown. I loved Burdines and Hartley’s. Woolworth’s and Grant’s were wonderful dime stores. My greatest experience in downtown Miami was going to the old federal courthouse. That is where I became a U.S. citizen in 1951.

One thing that detracted from my chosen paradise was racial prejudice. The rule was “separate but equal,” but life was definitely not equal. My husband, who was not Jewish, was shocked to find that he could not take me into certain places that were “restricted” – that meant no Jews or blacks.

He also told me that when he was working as a tile-setter he had a black helper. The helper was just as skilled as he was, but he could not join the union. He did the same work for less pay. I am happy to say that these injustices no longer exist.

In 1963, I went to work in the cargo department of British Airways. During the 13 years that I worked there and in retirement, I enjoyed the airline travel privileges to see the world. After retiring, I volunteered at the Holocaust Center at FIU, transcribing the life histories of survivors and liberators.

I now live in a condominium overlooking Biscayne Bay and look at Miami Beach from the opposite side. I walk every morning and enjoy the sunrise. Sometimes I swim in the pool. When I first gazed at the beautiful shore so many years ago, I couldn’t imagine what a wonderful life I would have. I still love it and feel so lucky to be here.