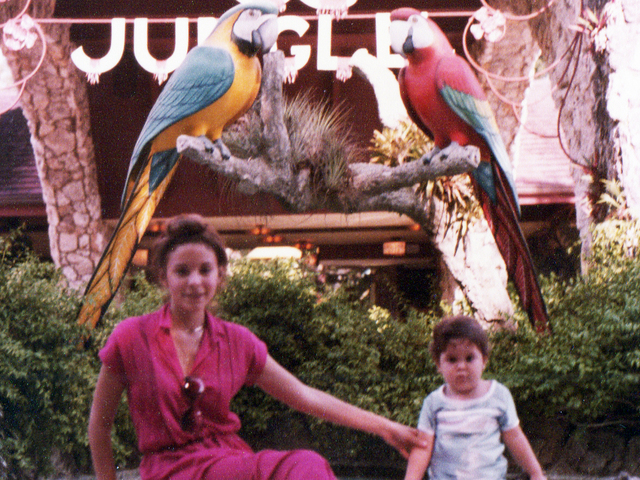 I was born in Nicaragua. I lived there until I moved to Miami in 1979 when I was 19 years old. I moved with my daughter; she was almost 2 at the time.

From the moment I moved to Miami I felt at home. My sisters were living here. The first time I came to Miami from Nicaragua, I was 5 years old and I loved it; my memories from it when I was a child were beautiful. And I came often with my parents from Nicaragua. When I moved here, I was acquainted with the city. My sisters living here also helped a lot.

When I was 12 years old, something terrible happened: I lost my father, Julio C. Martinez. He died here in Miami while I was living in Nicaragua. It was a sudden death and it was really difficult. I was very close to him, so it was hard on me. I’ve always been a happy and cheerful person, but in my heart I had that sense of void, that sense of missing my dad, that grief. It is because of that great loss that I do what I do, and that’s why I share this with you.

My daughter went to school here at Carrollton School of the Sacred Heart, which she loved. When she was in high school, I decided to go back to school myself. I started at the south campus of Miami Dade College, and now I teach a class there on world religions.

At Miami Dade, I chose psychology to be my major, and then I applied to different schools and was accepted at the University of Miami. I went there and took a class in world religions, which I loved, so I took on another major, religious studies.

There I took a class that really attracted me, called “Death and Dying.” I realized I needed it for my own sense of loss. It was very healing.

When I was in Nicaragua, I didn’t have counseling or support groups, or books to help me cope with my grief. I had my family and my Catholic religion customs at the time to wear black and white. There was no music, no TV and no going out because I was mourning. But at my young age, I did not understand what was happening.

When I finished at UM with a double major in psychology and religious studies, I started the graduate program on gerontology at Florida International University and then went to St. Thomas University for a certificate on loss and healing.

Now I help people cope with grief, including immigrants who suffer from a loss of homeland, traditions and language.

I’m proud to have accomplished my purpose in this amazing city. Miami is such a warm city. And being Hispanic, with so many Hispanics here, I feel at home.