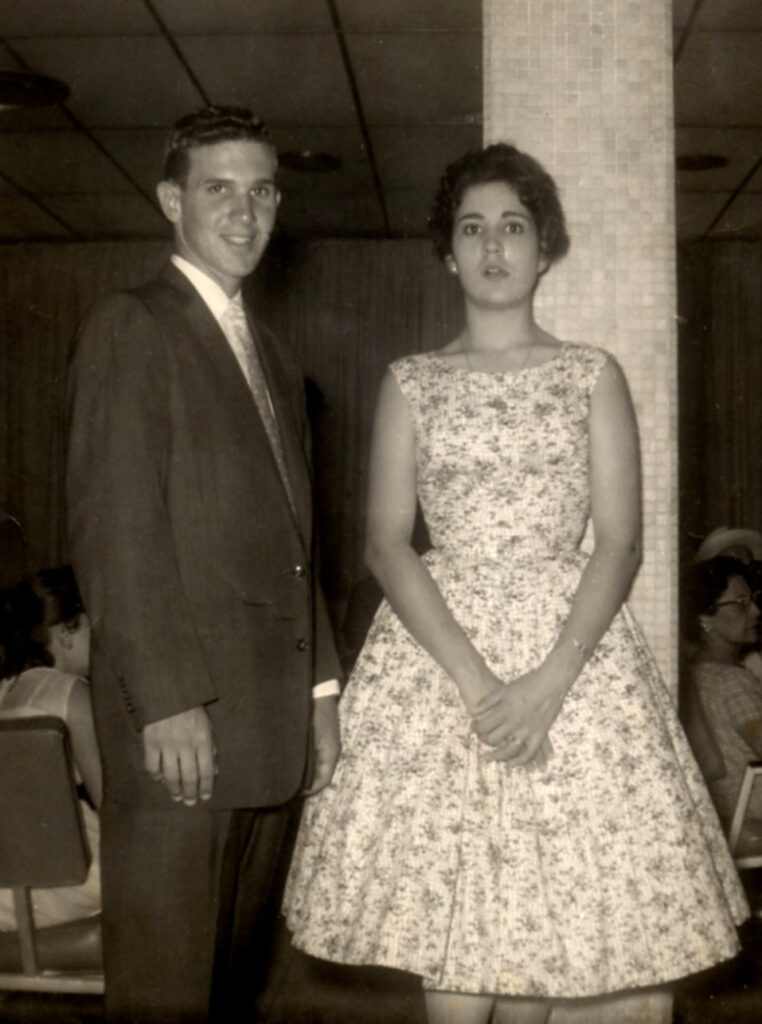 We left our parents behind, not sure of when or if we would be together again. My mother later told me that on the trip back to our hometown of Florida in the Camaguey province, she decided they would immediately start getting the necessary documents to leave the island. They were finally able to leave in May 1962.

Meanwhile, after spending a few days with an uncle in Hialeah, we left for our final destination in New York City to live with another uncle, who was the one who had processed our papers. While we were welcomed warmly by our uncle, aunt, and two cousins, I felt as though I was navigating someplace in midair.

The cold weather did not agree with me and I was often sick. In March 1962, when my uncle was notified that I would not pass the school year due to absences, I was sent to Hialeah to live with the uncle who had welcomed us to the United States a few months before. Two months later, when my parents arrived from Cuba and found me in Hialeah, they decided against their original plan of settling in the New York/New Jersey area in favor of the milder Miami climate.

In time we became acclimated to this city, which was in some ways very similar to our homeland 90 miles away. One month after my parents arrived, my brother joined us in Hialeah after having finished the school year in New York. The four of us moved into a tiny apartment near where my uncle lived. By then a third uncle and his family had come from Cuba and lived nearby making our family group larger and stronger.

By the time I was 17, I was feeling strong and needed to look for work and help the family get ahead. That’s when my mother, who had never worked outside of the home, clearly let me know that I was to go back to school and that she would be the one looking for work. My father found work on the night shift of an aluminum factory near Flamingo Plaza, a couple of miles away from our home. We did not yet own a car so around 2 p.m. every day my father would walk to work, lunchbox in hand, and at 11 p.m. one of my two uncles would pick him up.

My mother found work sewing at a factory and my brother and I enrolled in Hialeah High School. After we got a car, a 1953 Chevrolet that cost $250, my mother and I would drive to downtown Miami some Saturday afternoons and frequent Richard’s Basement, Lerner’s, Three Sisters, and Woolworth’s. We would treat ourselves to a slice of cake with a scoop of ice cream like we used to do when I was growing up in Cuba.

The Sunday treat was going downtown as a family to eat at a restaurant where a plate of chicken with rice and sweet plantains would cost 50 cents and an order of fried rice would be 75 cents. Truly a treat! I don’t remember the location of the restaurant or the name, only that it was advertised as owned or operated by “Rafael and Federico.” Another popular eatery was El Morro Castle, which still exists today on Northwest Seventh Street. We also went to the location that is now La Carreta on Southwest Eighth Street.

Near the Versailles Restaurant was Trios, famous for its open-face sandwiches of roast beef or turkey. Little by little, with effort and diligence, we made progress and after a few months were able to rent a house in the vicinity. Two years after that, with a loan from my uncle, we were able to purchase our first home which, marvelously, came equipped with all the necessary furniture. For the small appliances we relied on collecting stamps given out at grocery stores and gas stations. Two of the stamp companies that come to mind are Top Value and S & H Green Stamps. Filled books could be exchanged for toasters, mixers, blenders, clocks, etc.

By then I had graduated from high school and we decided, in the old custom, that we would all work to help put my brother through school. That is how, in spite of our modest means, my brother graduated from the University of Miami with an engineering degree in May 1968.

My first job was as a clerk at the Cabanas office of the old and beautiful Roney Plaza Hotel on Collins Avenue and about 23rd Street, later transferring to the sales office.

I remember the small Miami airport with the terrace where we would go frequently to greet family and friends who arrived. It was common for groups of people to go to the airport to greet the new arrivals, a welcoming committee of sorts.

My father religiously went to “La Casa de la Libertad” searching for familiar faces to offer them some assistance. Mostly it was people who had just arrived and were waiting to be relocated to another state, so my father would bring them to our home for refreshments and a couple of hours of relaxation and unwinding.

For leisure, it was typical for two or three families to get together on Sundays and spend the day or the afternoon at Crandon Park Beach or Haulover Beach enjoying the time together and reminiscing about Cuba. An activity that I enjoyed very much was attending the shows of “Añorada Cuba,” a musical program put on by young people, many of whom were students at Hialeah High or attended the Church of the Immaculate Conception, under the direction of Father Bez Chaveve.

The changes in greater Miami area over the past 50 years have been many and amazing. To the west, Miami basically ended at 57th Avenue. The old Tamiami Airport eventually became FIU and the Miami-Dade Youth Fair. For the most part, Hialeah was a cow pasture.

In 1966 I found love at first sight and in January 1968 I married a wonderful man, with whom I just celebrated 44 years of marriage. We have two daughters who grew up in Miami. As they formed their own families, their jobs took them away from the area but they regularly come back to spend time with family and for a taste of Miami.

In the early years in Miami I postponed my career plans to help my brother, and later, my husband. When my oldest daughter started college at the University of Miami and my youngest started high school, I went back to school and got a degree in education. I fully enjoyed teaching and being a part of my students’ lives as a member of the faculty at Miami Springs Senior High School for 16 years, until my retirement six months ago.

That’s how, 50 years after leaving Cuba, I consider Miami my home. There is in my heart a special love for the land where I was born, but my roots are firmly planted in Miami.

I cannot see myself living anywhere else but here. Miami will always be home to me.