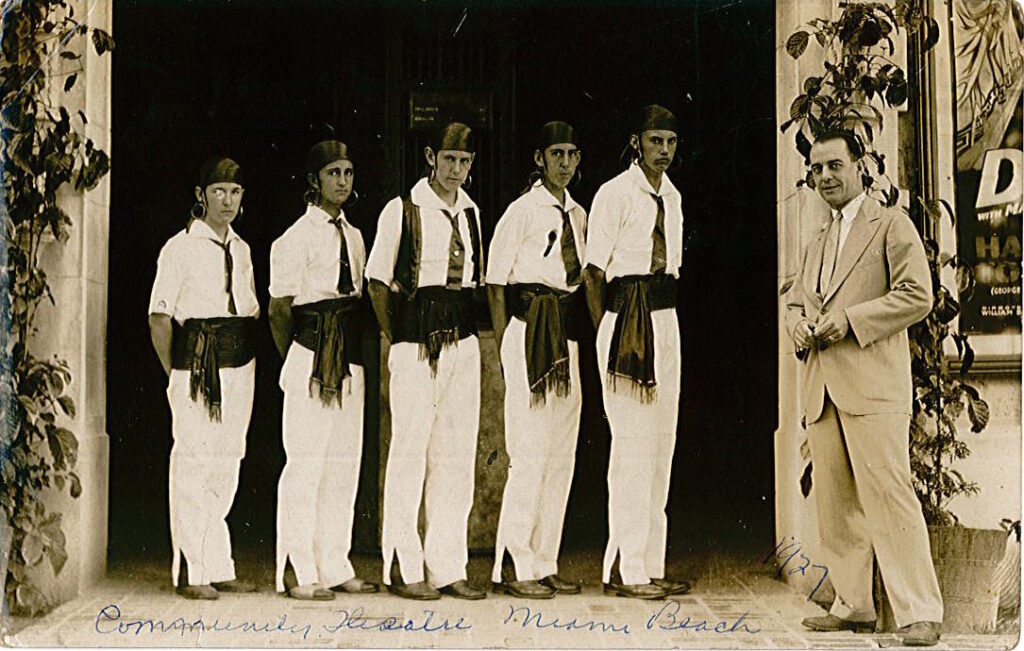 “Tonight we launch — where shall we anchor?”

This was the motto chosen by the first graduating class at the new Ida M. Fisher High School in 1927, when the five graduates were honored with their diplomas.

My mother, Helen E. Johnson, was the class president and her friend Veronica was the secretary/treasurer. Later, Mother wrote in her memoir, “When our senior year began in September 1926, there were twenty-three students; eighteen left Miami Beach before graduation. We held classes in the open concrete rooms on Washington Avenue without desks. Moveable screens separated the classes. The coach’s wife ran a sandwich and drink lunch counter in one of the back rooms. We were glad to be in a hot climate [though] no windows [had been installed]. The teachers were wonderful to endure this [during construction].”

The first yearbook, “The Kingfisher,” in 1927, was a paper-printed edition published by the journalism class. The following year the title was changed to “The Hourglass,” and in 1928, it became “The Typhoon.” The small school was filled with activities, athletics and clubs, despite the few students. The building had a central courtyard where all students could mingle.

Just before graduation, Veronica and Mother went to a hair stylist in Miami for their own personal style, “wind-blown.” The junior/senior banquet was held at the Wofford Hotel. Veronica’s parents treated the class to an outdoor luxury dinner at The Biltmore in Coral Gables where the class held their senior dance. My mother drove everyone from the Beach to Coral Gables (more than an hour trip each way) in the family’s Jewett touring car, which accommodated the class and their dates.

My grandparents, Alma and Theo Johnson (known to everyone as Mom and Pop), drove to Miami Beach in September 1924 with four of their six children. Pop came to Miami Beach to partner with his brother, Richard Johnson, who was buying and developing properties on the Beach. Little housing was available for a large family when they first arrived with their four sons. Helen and Dorothy (my mother and her sister) stayed in Ohio while Mom, Pop and the boys stayed in a Quonset hut on Fisher Island until Pop built a place for the family.

In her memoir my mother recalled her trip south: “My sister Dot and I [wore] winter coats, hats and boots, not knowing what to expect. We traveled on the Big 4 train from Columbus to Cincinnati and changed to a Pullman sleeper. During breakfast in Atlanta, switching [train] cars was so jerky we could only get half a cup of hot chocolate.”

By the second night, they were in Jacksonville. They boarded Henry Flagler’s Florida East Coast Railroad, with a stop in Ft. Lauderdale (population about 1,500), where Mother and Dot put on their summer clothes. They arrived in the middle of Miami and were met by Pop in his Model A Ford.

Pop was building a warehouse to cover the hardwood flooring used in construction. It was located on Surprise Lake, the locale near what was to become the future Miami Heart Institute. This warehouse became the living quarters for my mother’s family and for the workmen and was aptly named, “the Barracks.”

“Mom cooked three meals a day for everyone and did all the laundry. No wonder she was not so happy in Miami,” Mother wrote in her memoir. “She’d left her church, her lifelong friends and relatives in Ohio, and was lonely, because she did nothing but work, cook, and do laundry.”

My great-uncle Richard was the wealth seeker in the Johnson family. In Columbus, OH , he owned and operated a hat factory before he became a promoter for Carl Fisher on Miami Beach. His office was located in the Bastian Building on Lincoln Road. His wife Dorothy changed her name to “Dorothea” when they moved to Miami Beach with their only child Gwendolyn. My mother and Gwyn were close in age, so Mother often accompanied her to parties and dances where she met many of Gwyn’s socialite friends.

“When school was out, Pop and two of my brothers stayed on the Beach to work on the apartment Pop was building, the Avocado.” In the fall, Mom, Pop and the rest of the family went to Pennsylvania to visit relatives. During the Pennsylvania visit, the 1926 hurricane hit Miami. Pop left immediately and drove to Miami Beach to assess the damage to the Avocado. In Mother’s memoir, she recalled, “There was little water damage to the hardwood floors and some damage to our solar hot water heater system on the roof.” He returned, picked up Mom and the boys and drove back to Miami Beach. My mother and her sister went by train to join them.

“When we arrived, we were amazed, seeing barges tossed in the interurban track in the middle of the causeway from the storm. The roadway looked like waves. The Australian pines on Pine Tree Drive were practically wiped clean of all foliage, but Pop’s ‘Avocado Apartments’ withstood the storm and the following hurricane that finished off many of the buildings partially damaged by the ’26 storm. He was an excellent builder.

“By November ’26, the Avocado was ready for occupancy. Before renters arrived, I was allowed to have a party in the front [apartment].” Mother described the Avocado: “Eight apartments on two floors off a main hall, each with a sun room, living room, dining area, kitchen, bathroom and one bedroom…all furnished including dishes and linens, love seats and couches that could be converted so each apartment could sleep up to six people.” All came with housekeeping. “However, on Miami Beach, housekeepers of color had to leave the Beach by 5 p.m.” Mother’s family moved into the two-bedroom apartment over the two-car garage at the rear of the building. Mom and Pop occupied one bedroom; my mother and her sister shared the other one. The boys bedded in the sun room and living room.

Life was good on Miami Beach for my mother’s family until two events brought Beach living to an abrupt end. Just as Mother was graduating from Ida M. Fisher, Pop’s business manager in Ohio pilfered the profits from his heating and sheet metal business, and then Pop’s brother, Richard (holder of the property deeds for their lots and buildings), entered a poker game with Carl Fisher. He used the deeds as collateral, lost the game and all the holdings, leaving no home for my mother or her family on Miami Beach. Thus, the return to Ohio began.

After several decades in Ohio, Mom and Pop moved back to South Florida, but not to Miami. They chose that “small town” where my mother and her sister changed into summer clothes on their first train trip. My parents joined them in the Riverland area of Ft. Lauderdale years later. Three of Mom and Pop’s children and their children and great-grandchildren made South Florida their permanent residence, and I chose Miami, my home now for nearly 40 years.