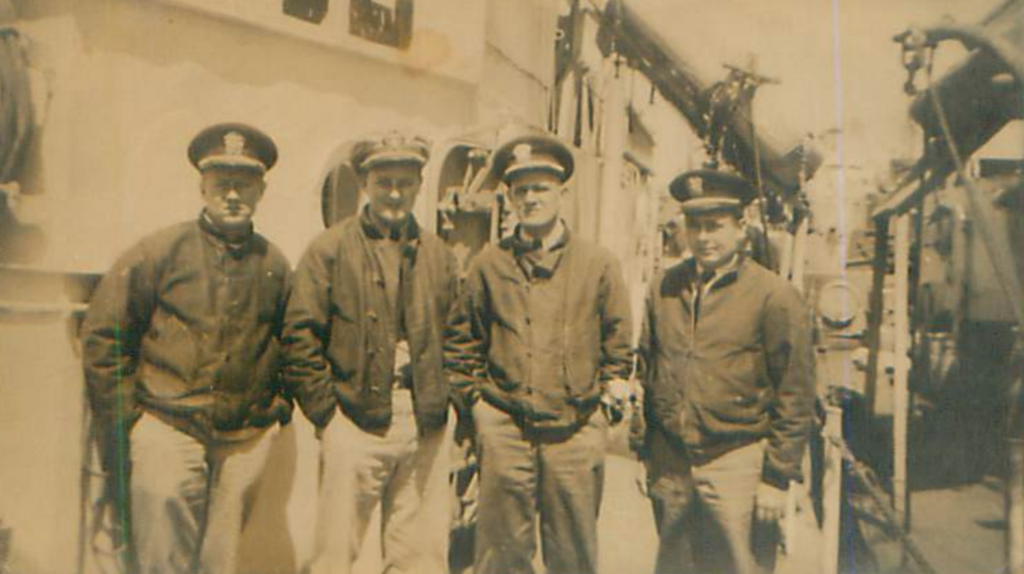 This is the story of a true Miamian, our father.  He would speak of his city using the Indian pronunciation, MI – AM – MA.  There are eight of us, all born in this town.  As second generation, we say MI – AM – MI.

Richard Sanborn Hickey, our father, was not born in Miami.  He was born in Schenectady, New York, on March 8, 1921.  His parents moved from Schenectady to Miami, a booming town of opportunity.  Two brothers, Robert and John would later complete the family.

The family lived downtown on Northwest 5th Street, a block away from Miami Field.   It was on this field that the Orange Bowl would be built.  (Construction began in 1935 and was completed in 1937 at a cost of $340,000.)  The first game on the field was the Bucknell Bison vs. the Miami Hurricanes.   It was called the Festival of the Palms.

When the boys were old enough, Grandmother hired a woman to stay with the children and she opened a woman’s garment shop on Flagler Street.  Grandfather was in real estate. Business was booming.

Bicycles were the popular mode of transportation.  The boys could be seen riding back and forth south to Kendall Drive (a dirt road that ended at 87th Avenue). On February 15, 1933, the boys decided to take a ride down to Bayfront Park.  It was there that they joined the crowd to hear the president-elect, Franklin Roosevelt, speak.   Instead they witnessed the attempted shooting of the president-elect.  A man named Guiseppe Zangara shot five people, fatally wounding Anton Cermak, the mayor of Chicago.  FDR was unharmed.

One summer Dad broke his arm.  When the cast was removed, they found he favored his arm and would not use it.  The doctor told Grandfather to find a pony and get him riding.  “He will have to use his arm.”  Grandfather bought a pony and Dad named him “Tony.”  Tony spent his days living on the land south of town on the corner of Kendall and U.S 1.  (Shorty’s BBQ stands there now.)  Grandfather would drive the boys to Kendall where Dad would hop onto Tony and ride back downtown and then return south.  The doctor was right; Dad once again began using his arm.

School for the Hickey boys was downtown.  Gesu Catholic Church offered school from grades 1 through 12.  It was perfect for the family as it was close to Grandmother’s shop.

It was in the fourth grade that Dad made a new friend, Sonny Capone.  Every morning Sonny arrived in a black limo. Then every noon the limo would bring Sonny his own special lunch.  Sonny invited Dad to eat with him inside the limo under the protection of Sonny’s bodyguards.   Grandfather explained to Dad the need for bodyguards.  That lasted for a year until Sonny was transferred to St Patrick’s school on Miami Beach.

Music was a very important part of the Hickey household.    They formed their own little band, practicing in the garage.  During the high school years the “Dick Hickey Melodiers” were introduced to Miami.  They played all around town – dance nights at the Coral Gables Country Club, special occasions at the Redlands Country Club, sock hops held atop the Gesu School building. They played before the movies at the Gusman Theater.  Grandmother played the piano, Robert the sax, Dad on clarinet and cousin Ted Gardinier on the bass.    The going rate of pay was around eight or nine dollars.   Dad got two dollars and the others divided the remainder amongst them.  The band era lasted throughout the college years.

Summers for the Hickeys were often spent driving north to visit the family.  At night they would pull off to the side of the road and pitch a tent.  Motels were few and far between.

After high school, there was no question that the University of Miami was the one and only school for Dad.   He was a Hurricane, through and through.  To help pay his tuition, he began waiting on tables in the school cafeteria, ushering at the theater on 41st Street and playing with his band.  A boxing scholarship was available.  He began to make a name for himself as a Hurricane athlete.   His brother, Bob, asked him why he was taking the beating when there was a music scholarship available.   And so his music took over.

Upon graduation, the U.S. Navy was waiting. Dad immediately went into officer’s training at Columbia University.  It was 1944 and D-Day was looming. He made it through the European and Pacific theaters, receiving numerous commendations.   He returned home when the war ended and obtained his law degree at University of Miami, graduating with honors in 1948.

He met our mother at (where else) a beach party.  This is Miami, right?  One date and he said, “I am going to marry that woman.” And so he did.  That’s where the eight of us began to enter the picture.

Dad opened his law practice in the DuPont Building and practiced in state and local courts. In 1963, he began serving as a municipal judge.  After eight years, he was a county court judge. In 1978, he was appointed to the circuit court bench where he remained until he retired in 1988.