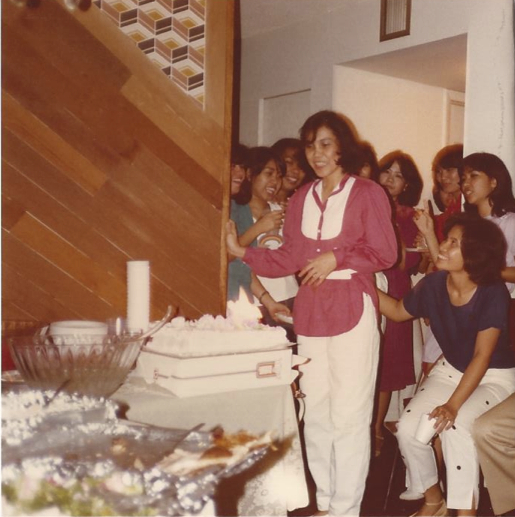 “Why Miami, why not New York?” My aunt (then chief nurse of the Nurses Corps of the armed forces of the Philippines) screamed at me.  She voiced concern about the immigration issues Miami was facing in the early ’80s and preferred that I go to the “Big Apple” to experience a major American metropolis.  I responded that in Florida it’s summer all the time like the Philippines and that’s where I got an H-1 visa to legally work in the United States. My only knowledge of Miami then was humming the Miami Dolphins fight song from the perfect 1972 season.

With $100 pocket money from my oldest brother and a paid-for airfare through Pan American Airlines’ “Fly Now, Pay Later” plan, I began my odyssey in 1982 at the young age of 23.

Upon our plane’s stopover in San Francisco, my colleague’s relatives invited us to dinner, but we came back so late that we were not able to board. Oh no!  But confident that we would be rescued by my brother, I asked if he could pick us up. His response was, “Do you know that San Francisco is a five or six hour drive from Los Angeles?” We had no idea of the distance or geography; this was pre-Google time!

Undeterred, my friends and I slept at the airport, and at 4 a.m., I reluctantly paid $4.00 for a hot chocolate, shared with my other three friends. Initially we couldn’t drink the hot chocolate because we thought the straw had no hole in it; then we realized it was just a stirrer, not a straw! Welcome to America!

We were met at the Miami International Airport by complete strangers, with no prior contacts. They were Filipino nurses who worked at Miami International Hospital at the Golden Glades interchange, where we were also assigned. Relying on the Filipino bayanihan spirit of helping each other, the four of us were placed in four different apartments until we could find and afford one of our own.

On our third day after arrival, we signed our official work contract with a salary of $8.24 per hour.  Feeling concerned that our welcome was coming to an end where we were staying (guests, like fish, smell after three days, you know!), we embarked on another journey to be independent.  I approached the manager of an apartment complex on 183rd Street in North Miami Beach and showed him our job contract and begged him to allow us to rent with no deposit, no security, and no down payment.  Thankfully we were trustworthy to him and he agreed. At midnight we scavenged the big green trash bins for any recyclable junk we could reuse in our apartment. We got chairs, tables, lamps, a black-and-white television set, and even my first mattress!  Our white bed sheets, slightly torn on the sides, were donated by the hospital.

On our first shopping spree at Loehmann’s Plaza, a friend and I went to purchase a dress for a party, but it took us a half day to find one that suited our budget because we kept calculating how much it would cost in Philippine money. I finally settled on a $40.00 dress, which was more than my monthly salary at Manila Doctors Hospital; I felt so guilty for this conspicuous consumption!  After shopping, we decided to order a pizza and we were asked, “Whole or slice?” We really did not understand what the waiter said and we were too bashful to ask, so we just responded, “whole,” and then he asked, “small or large?” We said large because in the Philippines, pizza whole sizes were small, similar to an individual size here. Lo and behold we each got a large, whole pizza that we couldn’t consume, but we brought back home to our friends! We laughed and confirmed, everything in America is large!

After a year I saved enough to purchase my first car, a sleek, red Honda Prelude. Most of us worked the 3-11 p.m. shift. After work we would pack in my car to go dancing at Biscayne Baby in Coconut Grove and when someone liked one of us, he would be disappointed when he realized we were a pack of five or six in a car.  Sometimes we would come home really late and a few of us were called to work overtime for an early 7 a.m. shift, so we barely had any sleep but somehow we never compromised our work. Overtime work was in abundance then; some of my friends worked double shift almost daily. Nurses were such in demand!

I became one of the first nurse practitioner graduates at Florida International University in 1988 for a mere tuition of $500 a semester, due to a specially discounted certificate program.  Research nursing beckoned to me, so I joined Dr. Eugene Schiff at the University of Miami and later became the first advanced registered nurse practitioner (ARNP)/nurse liaison. I assisted him in opening UM’s Center for Liver Diseases at Cedars Medical Center. My constant thirst for more professional opportunities also landed me other exciting jobs such as research administrator, liver and GI transplant coordinator, and ARNP for solid tumors at Jackson Health System.

I met my husband at a famous watering hole in Brickell, Firehouse Four, now the restaurant Dolores But You Can Call Me Lolita.  In April 2014 we went back to the Philippines for vacation and, upon my return to Miami, I focused on helping restore the livelihood of farmers in Leyte whose farms were destroyed by Typhoon Haiyan. I love Miami’s cultural  diversity and resilience and with my true American spirit I  volunteered to be a fundraiser through the Global Giving Project, with the knowledge that we can defy odds and uplift ourselves if we have the will and  determination to succeed.

This fall, I’m looking forward to joining the cancer research team at the University of Miami medical school.