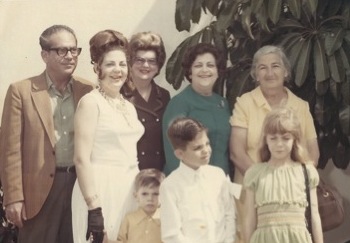 It was always exciting when a buela would tell me that she needed to go downtown for the day. This meant she had business to attend to at “ El Refugio,” the Cuban Assistance Center. This also meant that we would do a little shopping. As a reward for helping her translate and get around, she would treat me to lunch at McCrory’s.

We lived in East Hialeah. Our world was limited to our house, school, the grocery store and, very rarely, a trip outside to visit family and friends. We did not play with the neighborhood kids. She would not let us play outside of the yard. She was responsible for us so we were always within earshot.

My mom did most of the major grocery shopping, but a buela liked to shop with her money — the money she got from “ El Refugio.” I’m not sure that’s where it came from, but that is what I thought. Sometimes that meant that we would walk five blocks west to the big bodegawhere she felt most comfortable. She could pick up a few things and speak to anyone she needed to, in Spanish.

We would walk down 54th Street to East Fourth Avenue. It was a busy street with lots of cars, so crossing it felt like a major event. a buela’s personality was hard. She was a very strict disciplinarian and there was no crossing her. You needed to stay by her side while crossing the big avenue.

She always took me or my brother Henry with her. She did not like to take both of us together because it was harder for her to keep track of us if we wandered off. My brother was quiet and curious. He never made trouble but it occasionally found him. She preferred to take me along. I was chatty and wasn’t afraid to speak to anybody. Most of all, I didn’t wander.

On those rare days when she had to present herself at “ El Refugio,” we took public transportation to get where she needed to go. My parents worked. They either couldn’t get the time off to take her or she didn’t want to ask them.

On the day of the trip, a buela would never eat anything. She said she was afraid that she might be sick. I think she was just nervous. She would stress about the trip for days. She put her hair in a redecilla (a hairnet). It seemed weird. Today, you would call her a control freak.

We would take a public bus and ride from East Hialeah all the way to downtown Miami. We would cross neighborhoods I did not know existed and see people I had never seen. I looked at other people on the bus and knew that they came from different worlds than the one I knew. It felt almost magical.

She was responsible for getting us around and she was also responsible for me in a strange place. At age 10 or 11, I went along to translate and ask questions for her. She needed me although she never let on how much. It seems strange that an adult could count on a kid, but that’s how it was.

I remember walking into “ El Refugio,” today the Freedom Tower. There were lots of desks and people talking. There were high ceilings so the voices seemed to grow louder. I remember that they would give her jars of peanut butter and probably other stuff I don’t remember. That was something she would NEVER have bought, but my brothers and I loved having it because it was so different from what we were used to.

My favorite part of the trip was lunch at the McCrory’s lunch counter. I got to eat American food in an American restaurant. I mostly remember asking for fried chicken and French fries, like I had seen on TV. It tasted so good. She did not like hamburgers or hot dogs. She said it wasn’t “real food” so I didn’t push it. We sat on the swivel chairs and I would order for both of us.

Next, we would go to “ el discount.” The store was big and she could get stuff there she did not find in Hialeah. The shelves were really high and there was so much to buy there. Sometimes, she went into La Epoca, the fancy department store that had come from Havana. It looked classy, or classier than what we were used to, anyway. I know for a fact that she got my dad a guayabera there. They also had dress shoes and other special things there she seemed to really like.

Lastly, we went into Gesu Catholic Church just for a few minutes if there was time. Then, back on the bus.