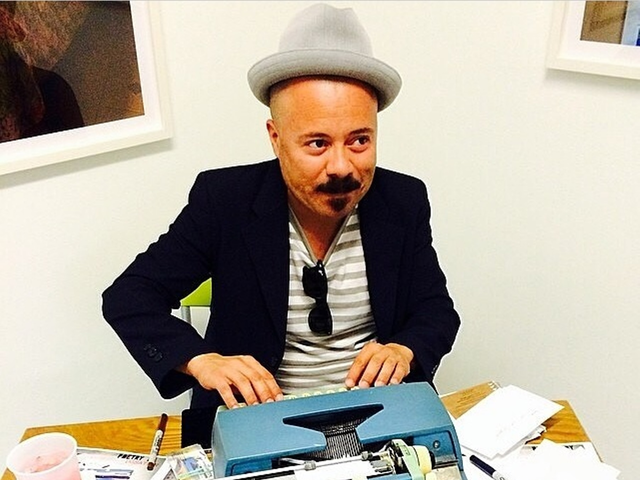 It was the summer of 2003; I was living in a very old and ugly apartment building between Biscayne Boulevard and Northeast 2nd Avenue, off of 33rd Street.

I had a bitter, mentally unstable landlord that walked around with a concealed weapon. I had a part-time gig at the Historical Museum of Southern Florida, now HistoryMiami. I would give guided tours of the permanent galleries and write historical theater scripts for their summer camp program.

Every afternoon of that summer I would arrive home from work, and I remember noticing really shady people coming in and out of my building — pimps and prostitutes — the same ones I would see walking the sidewalks while driving on the Boulevard. I also remember a particular barbecue smell circulating the hallways of the building.

This one time I was sitting in my writing chair, trying to figure out an ending to three of my stories when suddenly, the phone rang. I answered it.

I hung up. Couldn’t really stand people cursing on the phone. Especially annoying landlords like mine. This was the worst landlord I ever had. Two days late from the first of the month, and he was already calling the cops on me.
There was a knock on the door. I picked up a bad reading on it, but answered it anyway. It was my neighbor, the stripper. She was 75 years old. She had a six-pack of beer, Heineken. I let her in.

She always wore a mini skirt, and the skin on her legs was all loose and hanging down. Her teeth were yellow and twisted. She always bragged about how in her younger years, she was the hottest stripper in Miami, but now she was old, sick, and very tired.

We drank the beer and talked about the poetry of life. I mentioned the aroma in the building, and how it always smelled like barbecue. She looked at me with frozen eyes, slowly pointed at my back window and said, “Oscar, there’s a smoky chimney out there…” I got up to see and there it was, a smoky chimney right outside my window. I didn’t ask her anything about it; I figured I would go down there and see for myself. After a while, she left. I kept on writing. The phone rang.
“Yeah?”
“Goddamn it, Oscar, I swear you hang up on me one more time, I’ll put a bomb on your door knob.” It was my landlord again.

“What do you want? You want my rent?”

I hung up on him again. Couldn’t really stand people bitching on the phone. Someone knocked on my door. Someone knocked three times. I opened it. It was a giant lizard wearing funky sunglasses, shorts, sandals, and a funny haircut. It also looked like an iguana, but it was my landlord.

“What are you doing here?”

“Oscar, I had it up to here with you.” He told me, pointing at his stomach.

He was a very tall man. Always smoking a cigar. Heavy set, about 300 pounds. With a heavy breath. Minty breath. Tobacco minty breath. He looked insane and dangerous.

“Your rent is two days late, Oscar!” He screamed, taking out his .45 caliber. He pointed the gun at my left knee. I froze. I didn’t want to move. He walked around me, and now he was inside my apartment, pointing that thing at my back.

“I want my money, Oscar. Where is my money?”

“I’ve been taking it easy for the longest.”

“Look man, I don’t have your money here in the apartment.”

“We gotta take a drive to the bank on Coral Way, and my car’s out of gas.”

We left the apartment. He drove his car and steered the wheel with his left hand, while he pointed the .45 at my stomach with his right.

We arrived at the bank. It was closed. Most banks closed around 5:00 in the afternoon; it was 4:45 p.m. The lizard made me knock on the front glass door of the bank. The employees that saw me knocking didn’t even look twice. They all just stood there counting their money. Thank God it was closed. My bank account was empty. Suddenly my chance to kick the gun out of his hand came my way. His eyes opened wide; he couldn’t believe I had just kicked that thing out of his hand. I couldn’t believe it either. I picked it up fast, and aimed it. I could smell it running down his pants.

“This is where you lose, lizard.”

“You got a bomb on your door knob, Oscar.”

“That’s why you’re going to open it for me.”

“In your wildest dreams!” He screamed, as he ran away from me with surprising speed.

I walked over to the lizard’s car. He had left the keys in it. Got in. turned it on, and drove off into the congested streets.

Back at the apartment building, I stood outside wondering about that smoky chimney. I walked around the block on Northeast 2nd Avenue to see what building was the one with the chimney. I looked and it read, “Van Orsdel Crematorium.” I stood there feeling shocked. It all made morbid sense. The dust on my window sill was no dust and the barbecue smell that circulated the hallways was no barbecue.