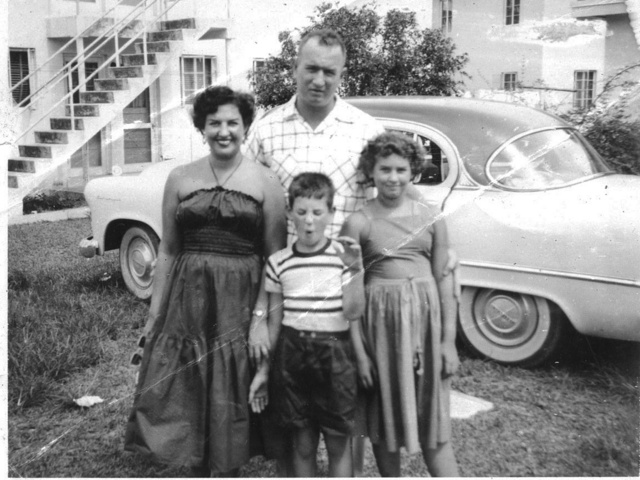 My father George Alberts was a reserve officer in the United States Air Force. When he was called to active duty during World War II in 1943, some of his basic training took place on Miami Beach. This was to have a huge influence on the Alberts family 10 years later.

I was born in Worcester, Massachusetts in 1946, and my family lived there during the first 5 years of my life. In 1951, my father, who was an Air Force navigator, got called up again because his services were required to navigate military aircraft between Tokyo and Seoul. When it became apparent that the fighting would be prolonged, he was allowed to send for his family, and we lived in Tokyo for a year and a half.

He was discharged from active duty in 1953 and we then moved to Wisconsin. My mother did not like the cold Wisconsin winters, so my father, recalling the beauty of Miami Beach, decided to take the family to live in Miami. He rented a two-bedroom apartment near the University of Miami where he finally managed to complete his college education that had been interrupted twice by war. He graduated with a degree in business administration in 1955.

Miami was a much different place in the mid-1950s. I can recall going to a food market in South Miami in 1954 with my mother and sister Maureen, and hearing my sister complain to my mother that the drinking fountain in the back of the store labeled “colored” was out of colored water! Fortunately, that sort of overt racial discrimination stopped by the end of the decade.

In 1955, my father started his business known as Alberts Advertising. Dad also purchased a new home on Southwest 18th Terrace and 82nd Avenue. Back then, the area that is now known as Westchester was so rural that I can recall seeing hunters with shotguns bird hunting across the street from our house.

Many of my fond memories from the early 1960s are of things that happened at the former Westbrook Country Club, which was located on the southeast corner of Southwest 87th Avenue and Eight Street. This club was very popular during the summer because it had an Olympic-sized swimming pool which, viewed from above, looked like a giant W. All of my friends and practically every lovely young lady I knew swam in and sunbathed around that pool. Unfortunately, the club closed in the mid 1960s. The beautiful pool, cabanas and two-story clubhouse with its formal ballroom are gone.

My mother was pretty much a stay-at-home mom. She did like to dine out frequently and in the mid 1960s she had dinner at a small restaurant on Southwest 32nd Avenue called The Studio Restaurant. She became fast friends with the owner and was hired as a hostess. She loved to tell us about people standing in line for up to two hours, sometimes literally fainting from heat and hunger.

Later on, Mom also worked as a hostess in another small restaurant that was located on Bay Harbor Islands called the Inside Restaurant. This establishment was owned by Dick Schwartz who was Meyer Lansky’s stepson. Lansky, the mob’s financier liked to dine at the Inside. He was frequently seen huddled with his associates having a quiet conversation at his favorite table in the back of the restaurant.

A few years after my mother left this job, Dick Schwartz was having drinks at the bar of the Forge Restaurant with a “made man” from the mob and they got into an argument about something. Dick drew a handgun from beneath his jacket and shot the man dead. A few weeks later, as Dick was getting out of his car parked in the lot adjacent to his restaurant, retribution came in the form of a shotgun blast that ended his life.

I received all of my education in Miami.

The first school that my sister and I attended was Sunset Elementary School. I spent my middle school, or what was then called junior high school years at West Miami Middle School. In 1962, I started 10th grade at Southwest Miami Senior High School. I wish I could say that I was an honor roll student but, unfortunately, I wasn’t wise or mature enough to take advantage of my educational opportunities.

What I did take advantage of was the fabulous social scene. Back in the early to mid-1960s, high school sororities and fraternities were very popular. There were legal (supervised by responsible adults) and illegal clubs. My passion was to socialize and party with my “brothers” in my illegal fraternity known as Eta Sigma Phi or “Eta Sig” for short. Southwest High, Gables and Palmetto all had these social clubs. Most of these fraternities had students from only one school. One of the nice things about Eta Sig was that it was comprised of students from all three schools, which helped widen the circle of my social contacts.

Most clubs followed the college tradition of using Greek letters, but others had more creative monikers. Readers who lived in southwest Miami Dade and attended high school at this time may remember some of these club names: Ching-Tang, Counts, Lynx, Decalion, Saxons, Bucks, Centurions and Tri-Sellet, to name a few.

The main purpose of these clubs was to throw parties. The instructors and administrators of the schools and local law enforcement did their best to discourage these clubs and the underage drinking that they promoted, but they remained popular until the late 1960s.

My freshman year of college was spent at Miami-Dade College, popularly known at the time as Dade Junior. In 1965, there was no South Campus so classes were taught at Palmetto High School in the evening. In 1966, I transferred to the University of Miami. My tuition for 15 credit hours of classes was $700. At my UM orientation, I recall a guide proudly showing the new students the school’s IBM 360 series computer, which was housed in a large room behind a glass wall. Can you imagine, the school only had one computer!

I majored in business administration and my time at the university was fairly uneventful except for the Vietnam War protests, which fortunately helped bring that conflict to an end several years later.

Today, Miami is a very different place with its multicultural and multiethnic population, its sprawling communities and its many beautiful buildings. Miamians have much to be proud of, but I also believe that among long-time residents there is a consensus that a relaxed, less stressful existence has been lost.