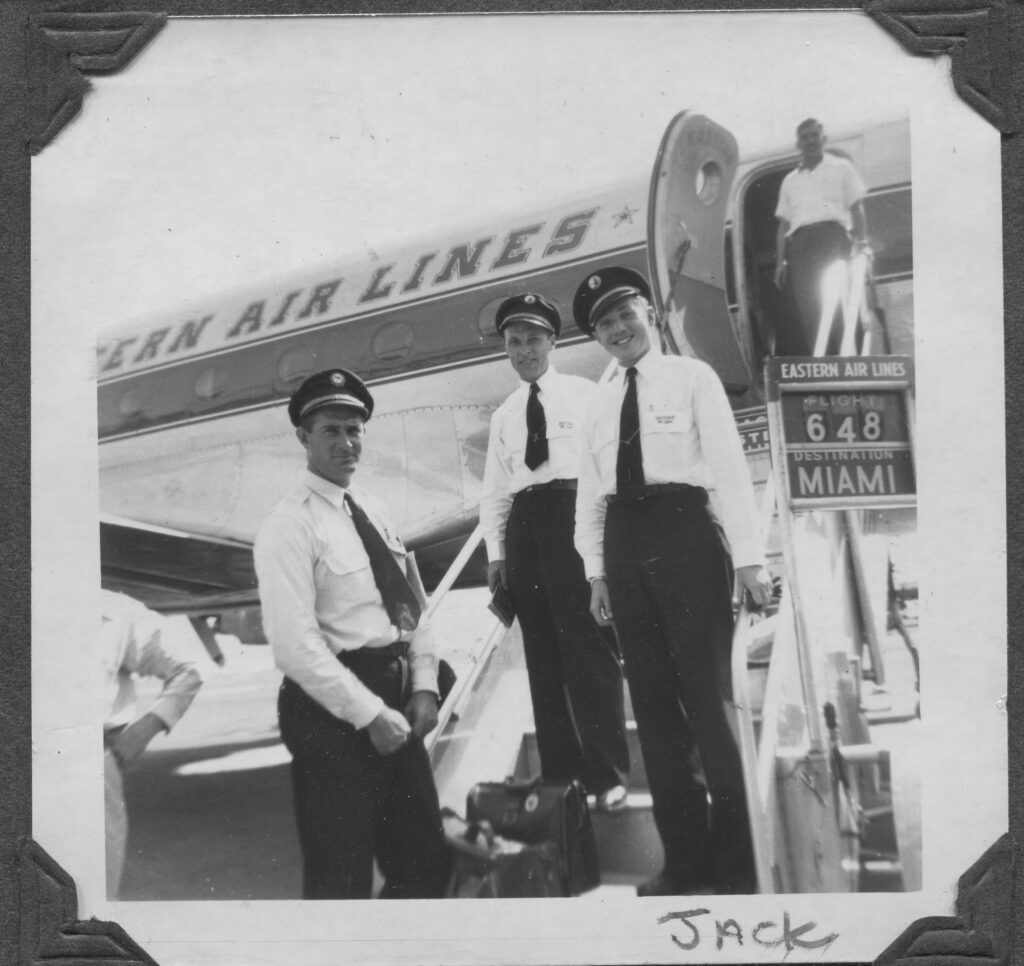 My Miami story began on March 24, 1944, when my father’s B-24 Flying Liberator, the “Thunder Bay Babe,” was shot down while on a mission to bomb the railroad marshaling yards at Steyr, Austria. Flak hit one of the bombs over Mostar and the plane exploded. Out of a crew of 10, my father was one of the four survivors.

He was captured by the Germans and interned at Stalag 17-B in Krems, Austria. In April 1945, he was liberated by advance units of Gen. George Patton’s Third Army. After 13 months of captivity he was sent to Miami Beach to regain his health.

My mother had moved to Miami Beach in 1944 to recover her health after a battle with rheumatic fever. She was working as a telephone operator when she met my father on a blind date.

Six weeks later, on Oct. 18, 1945, they were married at St. Patrick’s Church in Miami Beach by Father Francis Dunleavy.

They moved to a small cottage in Coconut Grove across the street from the fire station. My father worked for Burdines, Morgan Pianos on Biscayne Boulevard, Truly Nolan and then Eastern Airlines. My parents moved to Hialeah, to a small flat-roof house by the race track. My dad’s supervisor at Eastern Airlines wrote a letter to the phone company asking if they could install a phone line to my parent’s neighborhood. My dad was a flight attendant and his supervisor needed to reach him by phone.

My father had served as an altar boy in his youth and was very familiar with Latin. During his time as a POW, he studied foreign languages and became fluent in German, French and Spanish. Capt Eddie Rickenbacker, the president of Eastern Airlines, heard about this young flight attendant who spoke fluent Spanish and made sure my dad was part of the flight crew that accompanied him on his tour of South America. My dad also served as an interpreter.

My maternal grandmother, Gladys Long, moved to Miami in the late 1940s. She got a job with the Dade County Building Department and worked on the 15th floor of the old courthouse. The Dade County Jail occupied the upper floors of the courthouse.

My father taught me how to drive a stick-shift car in the Woodlawn Cemetery. He said we could not hurt anyone there.

I was born Oct. 11, 1951, and my parents Jack and Valerie Newman adopted me through the Catholic Charities Bureau.

My mother, an only child, depended on my pediatrician, Dr. Wesley Nook, for advice on how to raise me.

The first house I remember living in was at Oak Avenue in Coconut Grove. I went to kindergarten in an old stone building in Peacock Park. I walked to Coconut Grove Elementary School to attend the first grade. I remember going to Liles Pharmacy, the Florida Pharmacy in the Engle Building and best of all, the Krest Five & Ten store next to the elementary school.

In the late 1950s, my father got a new job as a traveling salesman for Northan Warren Co., selling nail care products and cosmetics to women.

We moved to a new house at 8770 Caribbean Boulevard in Whispering Pines. This was our first house with central air conditioning! I rode my bike with friends to Perrine Elementary School.

We had been going to St. Mark’s Lutheran Church in Coral Gables, but there was a disagreement over the building of a new sanctuary and many of the members left, including my parents.

We now attend Christ the King Lutheran Church across the street from the old Parrot Jungle. The founding pastor was the dynamic Carsten Ludder. George Williamson, owner of Williamson Cadillac, also a member, made sure that Pastor Ludder always had a bright red convertible Cadillac to drive.

We used to cook breakfast at Matheson Hammock Park or go swimming at the protected pool. My favorite beach was Tahiti Beach, with its floating raft that had a great diving board.

In the early 1960s my father was promoted to regional sales manager and we were transferred to Atlanta. The Northan Warren Co., had been sold to the Chesebrough Ponds Co. I attended Margaret Mitchell Elementary School. I will never forget that school because I was sitting in class taking a Weekly Reader test when another teacher walked into our classroom and whispered something to our teacher. The date was Nov. 22, 1963, the day President Kennedy was assassinated.

I eventually graduated from Stetson University in 1975. I shared the bathroom and the telephone with William Bryan Brock III and Louis Wolfson III, who both still live in Miami.

After graduation, I found a job as a “fuel allocation engineer” at the Shell gas station on Le Jeune Road across the street from the National Airlines hanger.

I returned to Christ the King Lutheran Church and was a member for almost 25 years. My grandmother and I could usually be seen in the same pew every Sunday. One day, Jim Harris, the personnel director of the Dade County Department of Corrections and Rehabilitation, called and asked me if I was still interested in a job. On April 13, 1976, I was hired as a correctional officer to work in the county jail system. I had many interesting assignments: housekeeper, booking desk, courts, transportation, training bureau supervisor, firearms instructor, operations, supervisor of Ward-D at Jackson Memorial Hospital and shift commander at the Women’s Detention Center. I was appointed to the board of directors of the Dade County Police Benevolent Association. Sometime later, Nelson Perry, then president of the PBA, asked me if I would be willing to serve as the chaplain.

I did not feel that I was qualified but he assured me that all I would have to do is open the meeting with a short prayer. This began the happiest 18 years of my life.

I retired in 2006, after 30 years of service to Miami-Dade County’s citizens.

I love Miami and never plan to move away.

No matter where I go – whether to Versailles, Vizcaya, St. Patrick’s Church, the Biltmore Hotel, Fairchild Tropical Botanic Garden or Lincoln Road, I have wonderful memories of living in Miami.