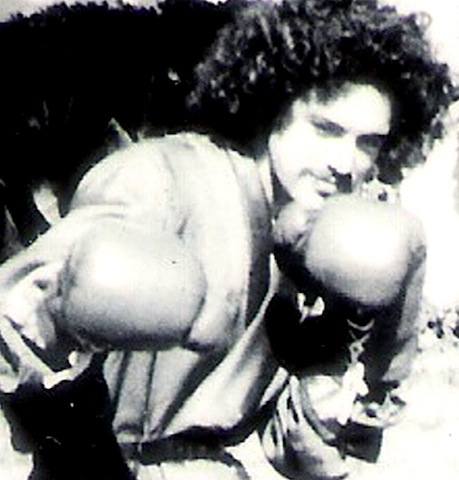 In 1950, my dad Hyman “Hank” Bergman left his hometown of Baltimore, Md. to study at the University of Miami on the G.I. Bill.

During World War II, he was a war hero (awarded the Silver Star medal, Bronze Star medal, 4-Bronze Battle Stars, and the Combat Infantryman’s Badge) who served with the “Blue Devils” of the U.S. Army’s 88th Infantry Division.

My mom Anne joined my dad, and the newlyweds moved to Third Street and Jefferson Avenue on Miami Beach. My dad attended college in the mornings and in the afternoons he trained in boxing at the newly opened 5th Street Gym run by Chris and Angelo Dundee. My dad had been an undefeated amateur boxer in Maryland (9-0, 9 knockouts) and thought about a professional career. However, after a 1951 sparring match with local welterweight contender, Bobby Dykes, my dad retired from boxing.

After graduating from the University of Miami in 1952 with a bachelor’s degree in elementary education, my dad began a teaching career for Miami-Dade County Schools. He taught 6th grade for more than 30 years at Central Beach Elementary School, later renamed Leroy D. Fienberg Elementary.

In 1957, my family moved to the North Beach section of Miami Beach, where I was born in Mt. Sinai Hospital. I was the only child. Back then, many of the side streets in North Beach were unpaved and covered in white sand.

Growing up in Miami Beach during the 1960s and 1970s was a wonderful time. There were 13 movie theaters (Beach, Carib, Flamingo, Lincoln, Colony, Cameo, Roxy, Cinema, Plaza Art, Sheridan, Roosevelt, Surf, and Normandy) and many showed double features for 35 cents.

There were live Yiddish shows at the Beach Theater on Lincoln Road during the peak winter months. I’d go with my grandmother, Fannie, and we saw such stars as Georgie Jessel and Henry “Henny” Youngman. During the summer, I went to special kiddy shows on Saturday morning, and later as a teenager, to midnight movies.

On Miami Beach, everyone knew most police officers by their first names. Rocky Pomerance was the “coolest” police chief in Miami Beach, and Mayor Chuck Hall drove around in a car passing out candy bars to the kids. I remember the big library bus, which would park in front of Stillwater Park on 85th Street, and I would check out books about Davy Crockett, Kit Carson and Buffalo Bill Cody.

My cousin Harvey Steckler and I appeared on popular local kids’ television shows in the 1960s. We were seen on the Skipper Chuck Show, Banjo Billy, Charlie Baxter’s Circus Big Top, and Jumpin’ Jack. I won free tickets on the Jumpin’ Jack show to the premiere of the movie Operation Crossbow, starring George Peppard, at the Loew’s 170th Street theater.

Royal Castle on 72nd Street and Collins Avenue was my favorite place to eat. They had the best mini burgers, birch beer soda, and lemon pie. A whole meal was less than one dollar.

I went to Biscayne Elementary School where I was a member of the service league in the fifth grade and the co-captain of the patrols in sixth grade. In those days, patrols went outside, even in the pouring rain, to stop traffic, so kids could cross the street.

My first field trip was in the fourth grade to Cape Canaveral. We traveled by Greyhound Bus and it was the first time I traveled away from home without my parents, and the first time I was on an air-conditioned bus.

At Nautilus Junior High, I met the first African-American students who were bused to the Beach to attend classes. At Miami Beach Senior High School, I was a sports writer for the school’s newspaper, The Beachcomber. I also studied acting with the legendary drama teacher Jay W. Jensen. Jay and I remained friends until he passed away in 2007. Jay and I even worked together as movie extras in Last Plane Out and Let It Ride.

Beach High students were allowed to leave the campus for lunch in those days. My favorite place to hang out: Ollie’s and Lums on Lincoln Road. I had a mustache and beard in the 11th grade and was able to order and drink my first beer at Lums in 1975.

In 1972, I followed in my father’s footsteps and trained to be an amateur boxer. My dad took me to the 5th Street Gym. Outside the gym, former heavyweight contender of the 1930s, King Fish Levinsky, would be selling neckties for one dollar. Inside the gym, I met world champions Muhammad Ali, Jimmy Ellis, Willie Pastrano, Luis Rodriguez and Roberto Duran. My nickname was “Big Train” because my opponents said my punch felt like they were being hit by a train.

In 1975, I worked (for free) as a sparring partner for Ken Norton. In one of my first amateur matches, I lost by a knockout to a fighter named Phil Rourke. Phil would go on to become movie star Mickey Rourke.

I also trained at the Elizabeth Virrick Gym in Coconut Grove. When I fought in the 1981 Golden Gloves against Larry Byrd, the price of a ticket was two dollars. My amateur career ended in 1983 and I compiled a record of 17-4 (17 knockouts). I also kickboxed and fought future action film star Jean-Claude Van Damme in 1979. I ended up winning 61 of 71 kickboxing matches.

I graduated from Miami-Dade College, Florida International University, and earned a master’s degree from Nova Southeastern University. Like my father, I became a Miami-Dade County school teacher. I taught English as a second language for adult and vocational education at Fienberg-Fisher Adult and Community Education Center (now Miami Beach Adult Education Center) for more than 30 years.

I’ve seen Miami-Dade County change over the years. I’ve seen good times and bad. My life in South Florida has been an exciting and rewarding one. But, one thing is for certain, there has never been a dull moment living here.