From Holguín, Cuba, Leandro Rojas is a master musician and instrument builder who specializes in the tres, a guitar-like instrument with three pairs of strings, and the primary instrument in the Cuban son genre. Born into a family of popular musicians, Leandro learned to play and build this instrument from his uncle. Leandro also constructs guitars, lutes, requintos, and baby bass guitars. Leandro has performed throughout Cuba and Mexico and has lived and worked in Miami since 2006.

Scroll down to view more photos of Leandro’s workshop, tools, and instruments.

(The following is from an interview HistoryMiami conducted with Leandro Rojas in 2016. The interview has been translated from Spanish to English)

What is your name and where you were born?

My name is Leandro Rojas. I was born in Holguín in the eastern region of Cuba, which is actually where the Cuban son was born.

Why did you leave Cuba and why did you move to Miami?

I came to Miami about 8 years ago. Before I came to Miami, I lived in Mexico for another 8 years. In Cuba, I started playing and working with instruments from a young age, inspired by my uncle who built instruments. That is when I started with music. I later played with several groups in Holguín, and then I played with a man who was very famous, Faustino Oramas, who was singing son. From Holguín, I went to Havana, and from Havana I traveled to Mexico in 2000 for work. I came to Miami in 2008 because it is the closest thing to Cuba. There are many Cubans here, and one feels as if they’re with the same kind of people.

What traditional music genres do you perform?

What I do best is the Cuban son and typical Cuban traditions such as son, bolero, cha cha cha, guaracha– all those things that are from Cuba. But as a child, I also really liked ballad music and Mexican music. The truth is, besides reggaeton, I play a bit of everything.

What can you tell me about the history of Cuban traditional music?

The son, which is closest to me, came from eastern Cuba. It began with the African slaves who were creating instruments like the tres and some percussion instruments. Eventually, the music developed into the son, and a similar genre was emerging called changüí. From there, the music evolved into the guitar-based trio. And then, the music spread through the whole country. In Havana, musicians wanted to combine the son with classical music by adding more instruments to the trios, and they added instruments such as the bass and trumpet until the septet came about. And eventually, Cuban music spread around the world.

When did you learn to play music? Who taught you?

I learned to play instruments from a young age. My father died in a motorcycle accident when I was 7 years old. He’d bought me a tiny guitar, and I sang and played what I could from about 5 or 6 years old. Growing up, I didn’t have professional instruments of my own, so I would watch the trios play in the countryside where my family lives, and when they would take a break, I’d take their guitars and start doing more or less the same thing they were doing, until little by little I developed my skill.

Then, my mom bought me a used guitar and I learned to play it by observing musicians. Later, when I was 14 or 15 years old, I started learning more about the tres through a cousin who played guitar and sang. I accompanied him with the tres and sang with him. In Holguín, I played with several groups, first as a hobby and then professionally. I studied guitar in school and played professionally in bands, and that was how I developed my skill with this instrument.

How did you learn to make these instruments? Who taught you?

When my uncle first taught me to make instruments, I was 12 or 13 years. I asked him to repair a guitar and he never had time to fix it. I would wait for him in his shop and watch him work. Tired of waiting, I got a piece of wood from a fruit crate and brought it to my uncle’s shop. I stood next to him so that he could show me how to cut the wood. He never thought I could do it because I had no knowledge of carpentry or anything like that. But I did it. I made a tres, and it sounded very nice. That tres was the first instrument I made.

What are the steps in constructing an instrument?

First you choose a piece of wood that has good acoustics and is very dry and well cured. If it isn’t dry, it will not produce a good sound. Sometimes when the wood is not dry, it can be ironed, which will release moisture from the wood. From there, the wood is cut. It should be cut from the tree a few years before it is used so that it’s dried well enough. Then, you choose the different types of wood for the many parts of the instrument. For the front cover, you should always use a flexible wood that can transmit vibrations. For the sides and the back cover, a harder wood is used.

The best way to make an instrument is calmly. The process should take about a month, so that once you glue one piece, you can go curing another piece of wood you used, or attaching other parts. You can attach a piece today and leave it for a week while the moisture dries out as you go doing other things. You make the sides, the back cover, and attaching everything. I can sometimes rush and get an instrument done in three days, but it’s not the right way to do it. The more time you spend, the better the instrument will sound.

When the body is completely closed and the arm and all of the pieces of the instrument are attached, the next step is to varnish. The best type of varnish is shellac. This is a resin that comes from the bark of certain trees. You dissolve this resin in alcohol. Then you prepare what is called a muñeca in Cuba, which is a piece of cotton covered with mosquito net. Then, you begin applying thin coats until the instrument is covered. Shellac is best for varnishing an instrument because it does not affect the sound of the wood. But today, people don’t do this because it’s very complicated and takes a lot of time. There are different types of coatings that are used. Lacquer is terrific, and there are also certain types of clear varnish. These coatings give the instrument a better look, they cover more, and they give it a nice shine. Above all, you should not use something that has a lot of chemicals. Once you varnish, you have to attach the strings and the microphone. I purchase the microphones because I don’t make them myself. The microphone is what allows you to amplify the instrument. And that’s it.

What kinds of instruments do you make?

The oud, the requinto, the tres, guitar, baby bass (which is electroacoustic), and the bass. I have been asked to make some special instruments, such as a double-armed instrument with a guitar on top and a tres on the bottom.

What do you enjoy most about playing music?

What I like most is playing Cuban music because that is where I can employ the tres, which is my instrument. But really, I like all music. I really like ballads, but the tres is not used in ballads. Aside from everything, Cuban music is the music that I grew up with and the music I carry inside.

What do you enjoy most about building instruments?

What I love most is to experiment and create a different model of an instrument. At any time, a new design will come to me. Right now, I’m doing a strange design for a tres that is completely different. And that’s what I like, that I have that ability and that I can make it. 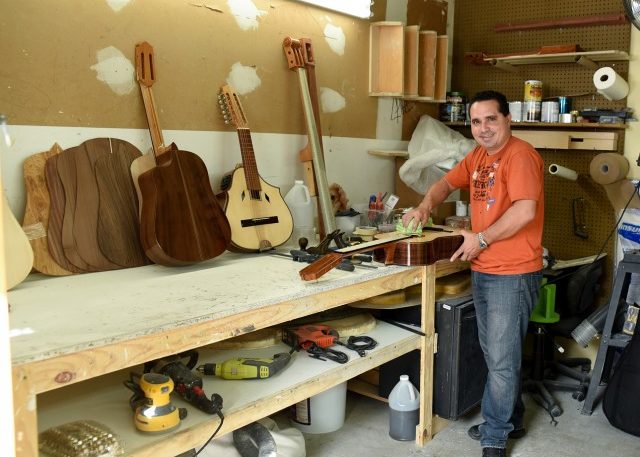 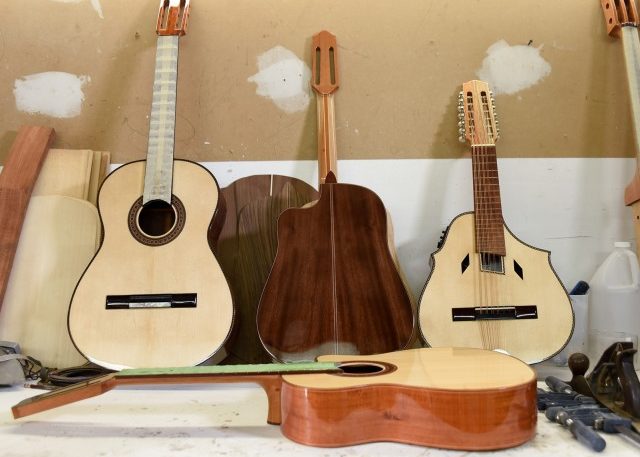 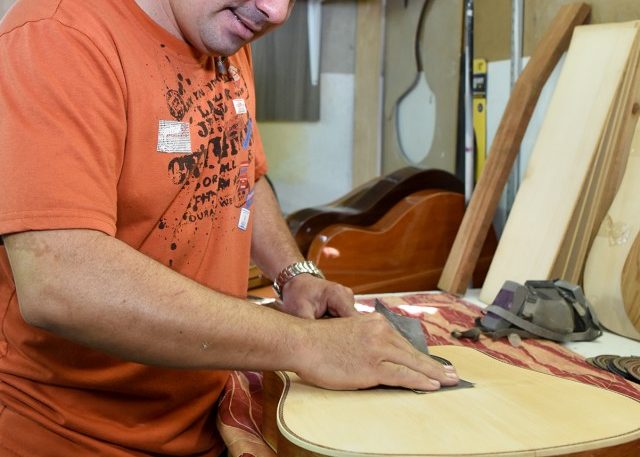 Leandro uses sandpaper to smooth down the body of the instrument 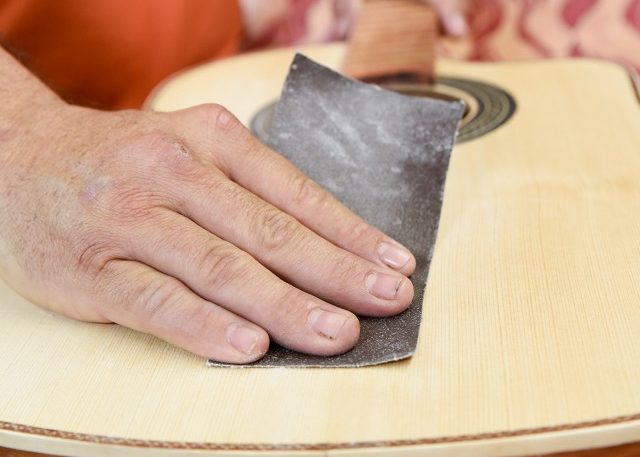 Leandro smooths down the front cover of the body 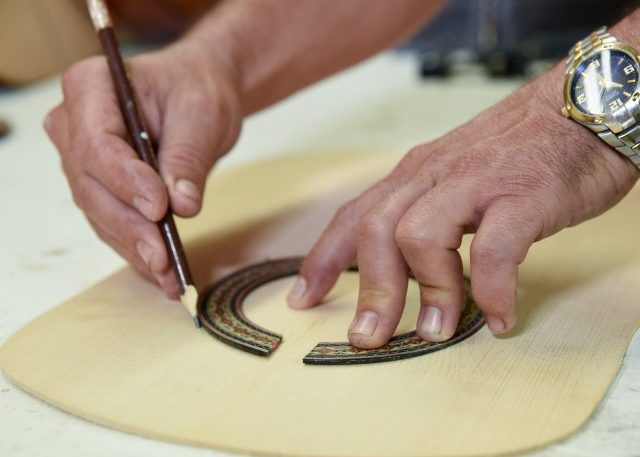 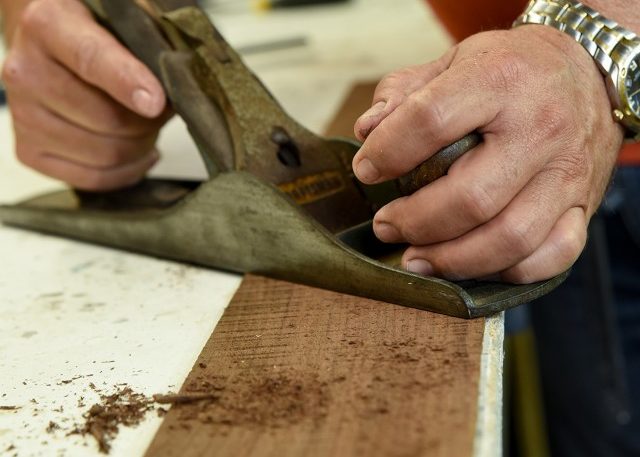 A smoothing plane is used to shave down pieces of wood 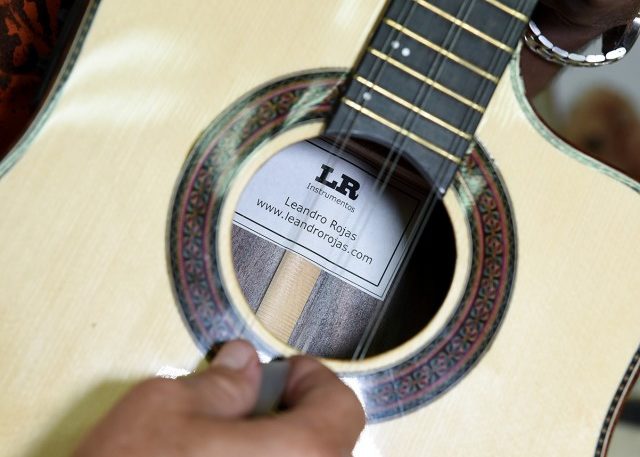 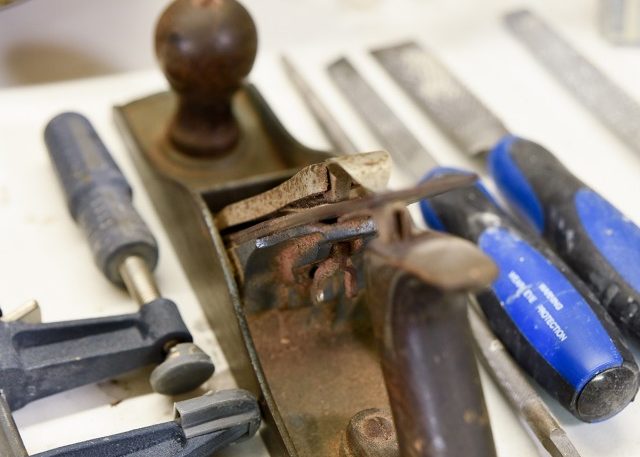 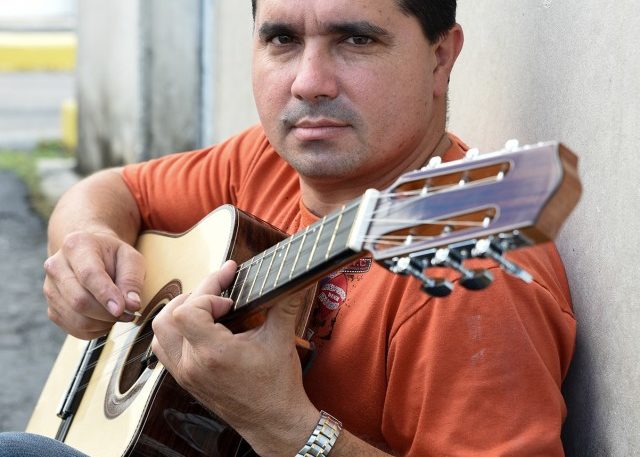 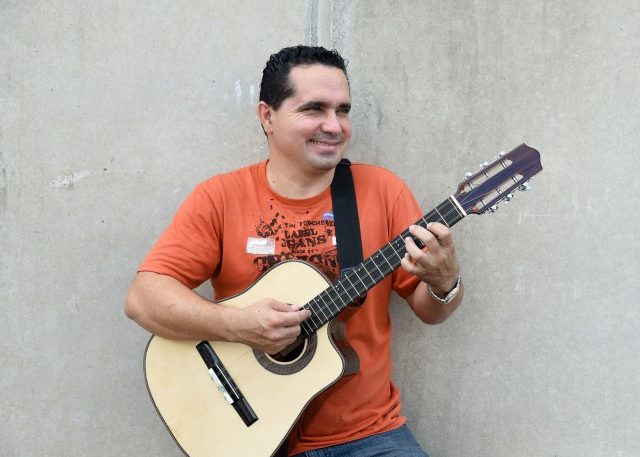