Performer and choreographer Ranjana Warier began studying Indian Classical dance at the age of six. Trained by her gurus, Ranjana later founded the Rhythms School of Dance, a training center for the traditional art form. She has shared her passion for Indian culture at various festivals, universities, and museums. A two-time Knight Foundation Arts Challenge winner, Ranjana choreographs performances across South Florida, and has received wide recognition for her efforts to educate children about Indian traditions.

What is your name? Where were you born?

My name is Ranjana Warier. I was born in a small village called Thirunavaya in the southern part of India.

Tell me the story of how you and your family came to Miami.

My husband was studying in the US and took a job in Miami. I moved here to be with him. Miami’s weather is very similar to the area where we are from in India. I felt at home right from the beginning.

What traditions and art forms do you practice? Where do you perform them?

I practice Bharathanatyam, one of the most cherished and most popular classical Indian dance forms. It is considered to be the epitome of Indian cultural expression. Bharathanatyam has many dimensions. It includes body movements, facial expressions, hand gestures, footwork, costumes, music, repertoire, and specific themes for performances. Because Bharathanatyam is so well developed, all of these aspects of the art have been codified and are documented in ancient scriptures as well as recent books. Once limited to the temples of India, this art form is widely performed all over the world today.

How did you learn the tradition?

The rhythmic sound of the ghungroo or salangai (the ankle bells worn by dancers) is engrained in my brain since childhood. Growing up in an art-loving family, I remember waking up in the morning hearing the Indian classical and folk music from the radio almost every day. It is not surprising that I started my dance education at the age of six. Though I was not a huge fan of it at the very beginning, this art form slowly grew on me steadily, and I developed a strong lifelong passion for it. I got my initial training in the classical dance forms Bharathanatyam and Mohiniyaattam from my gurus (teachers), Kalamandalam Devaki and Kalamandalam Indira. I had the opportunity to perform under the guidance of my gurus at several festivals over the years.

Tell me about the history of Indian classical dance.

Bharathanatyam, like other classical dance forms in India, traces its origins to the Natya Shastra, a Sanskrit text on the performing arts and to later works like Abhinaya Darpana. The Natya Shastra text is attributed to sage Bharata, and its first complete compilation is estimated to have been created between 500 BCE and 500 CE. Abhinaya Darpana was written by Nandikeshvara, the great theorist on stage-craft of ancient India.

Bharathanatyam further developed into its own distinct style over centuries. Today, it is one of the most popular and widely performed dance styles and is practiced by male and female dancers all over the world. It has traveled far and long to where it now stands in the world arena as one of the most appealing forms of art. It is rooted in Southern India, which is home to magnificent temples and to kings who held major roles in supporting and providing prominence to the art form. Bharathanatyam has not remained frozen. Many of its practitioners, through their fresh and polished interpretations, have added to the dimensions of this inherited treasure. This helps maintain the relevance of this ancient form in this modern age.

What does this type of dance express or depict?

Bharathanatyam can project aspects such as religion, sentimental values, yoga, science, myth, philosophy, and the daily activity of every life form on Earth through beautiful patterns, expressions, and movements. The expressive quality, or bhava, of a performer can render countless meanings and stories without the use of words. The tune and rhythmic pattern of a performance can also be used to express different moods.  The wordBharathanatyam itself is a combination of the words bhava (expression), ragam (tune), and thalam (rhythm).

Tell me about the instruments you use.

An important feature of Bharathanatyam is that the dance does not exist separately from music. Music is an integral part of the dance and not merely incidental to it. Song texts or lyrics are essential for the interpretation of songs in Bharathanatyam. The Bharathanatyam orchestra most often consists of a vocalist accompanied by amridangam (drum), a veena (string instrument similar to the sitar), a flute, a violin, and nattuvangam (cymbals). The orchestra usually sits on the left side of the stage.

The dancer focuses on linking to the rhythm of the nattuvangam throughout the performance. Nattuvangam is a Tamil word that stems from the words natta (dancer or dance performance) and angam (body or main operating or controlling centre). The Mridangam is a percussion instrument from India of ancient origin. The instrument is most suited to classical Carnatic music which is sung for Bharathanatyam performance. The mridangist synchronizes to the dancer’s rhythmic movements and to the song.

Tell me about the costumes, accessories, and other items that you use during dance performances or celebrations.

The Bharathanatyam costume is intended to look beautiful. It was the dress worn to dance for the gods in temples or for kings in palaces. Despite the resemblance to saris, Bharathanatyam costumes are not single pieces of cloth, but a combination of a number of specially stitched pieces. This customization makes them easier to wear, and easier to dance in than a sari. The costumes are bright and colorful and involve pleated pieces at the waist that fan out attractively during various movements. An essential item for a Bharathanatyam dancer is the pair of anklets or ankle bells (salangai in Tamil, ghungroo in Hindi). They make the rhythmic footwork of the dance audible. Dancers treat their salangai like musicians treat their instruments. The salangai are blessed by the dancer’s guru, they are worshipped on special occasions, and they are never worn casually.

Women’s costumes involve a significant amount of jewelry, including bangles, rings, earrings, nose rings, and special ornaments for the arms and head. There is, of course, makeup for the dance, and Bharathanatyam makeup has few unique features. Heavy lines are drawn around the eyes, extending outwards past the eyes. Similarly, the eyebrows are darkened and extended outwards with liner. The purpose of this makeup is to accentuate the movements of the eyes and eyebrows and to make them more visible because they are an important part of the dance, especially for expression. A red dye is applied to the soles of the feet and the tips of the toes, as well as to the fingertips. It is also painted in a solid circle in the palm of each hand. This unique decoration serves to emphasize the movements of the hands and feet. Men’s costumes are simpler and usually consist of a type of garment called a dhoti which covers the lower body. Men also wear ankle bells or salangai. They wear much less jewelry than women but do apply the same makeup to the eyes, since it serves an important purpose in the dance.

What do you value most about practicing this tradition?

This ancient art form allows me stay connected to my heritage, yet it allows me to be relevant to the current age.

Why do you practice this tradition?

Indian dances are very diverse and truly represent a country that is a melting pot of varied cultures. The dances are a very colorful symbolic representation of everything India is. It provides me with the most effective canvas to engage, to educate, and to entertain an audience. Over the years, I have learned that the infinite diversity that India represents, due to the co-mingling of several traditions and cultures over the past five millennia, truly represents the world today. For the last 20 years, I have explored the scope of Indian dances to blend them together with the technology available today and to portray the universal human spirit and the strength of diversity. 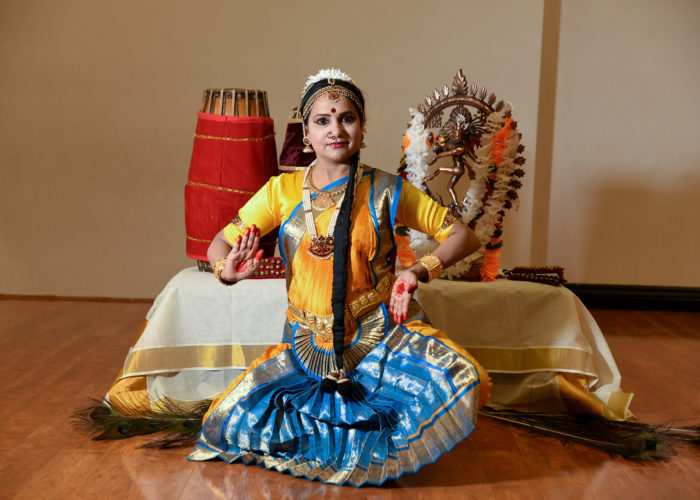 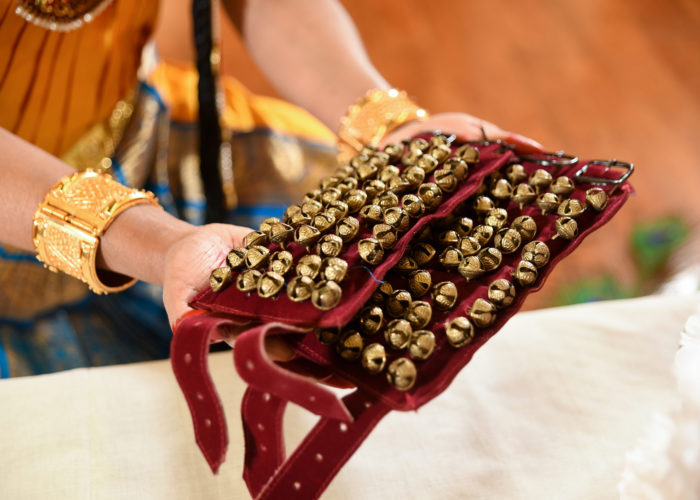 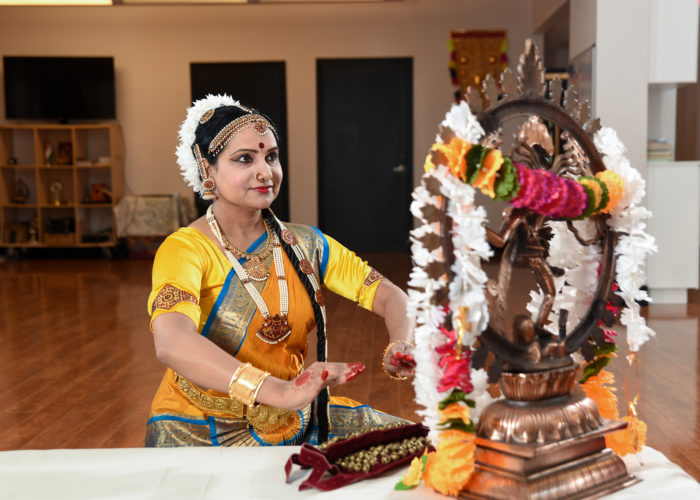 Dancers bless the salangai by presenting them to the HIndu deity Nataraja, the Lord of the Dance 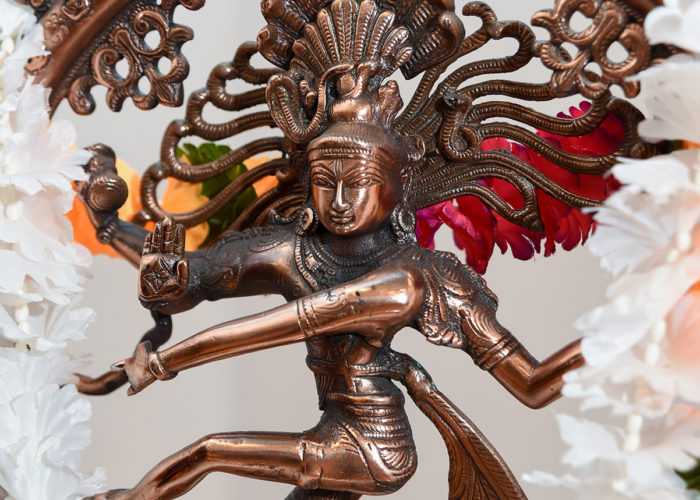 Nataraja (Lord of the Dance), the Hindu god Shiva in his form as the cosmic dancer 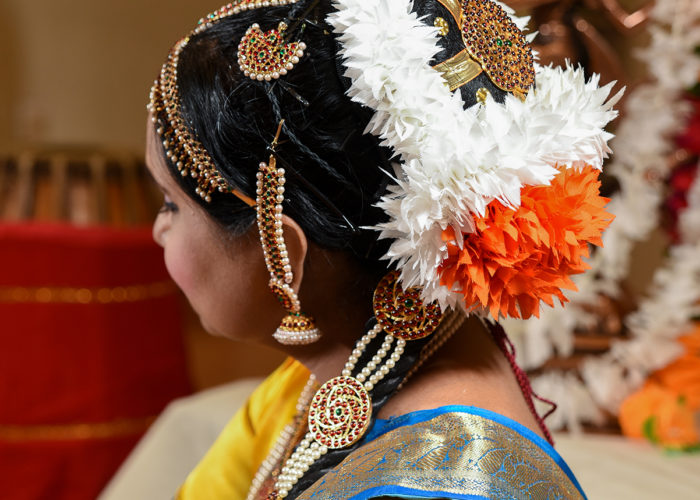 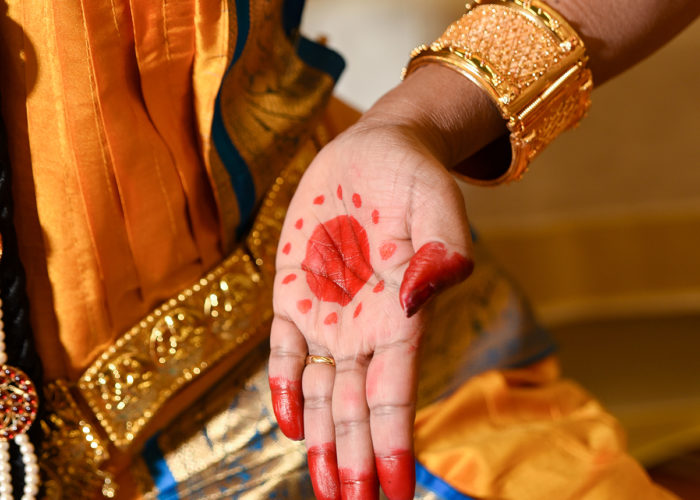 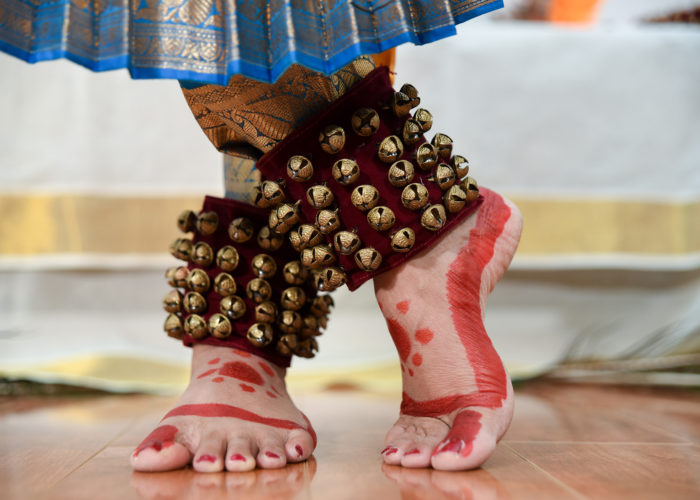 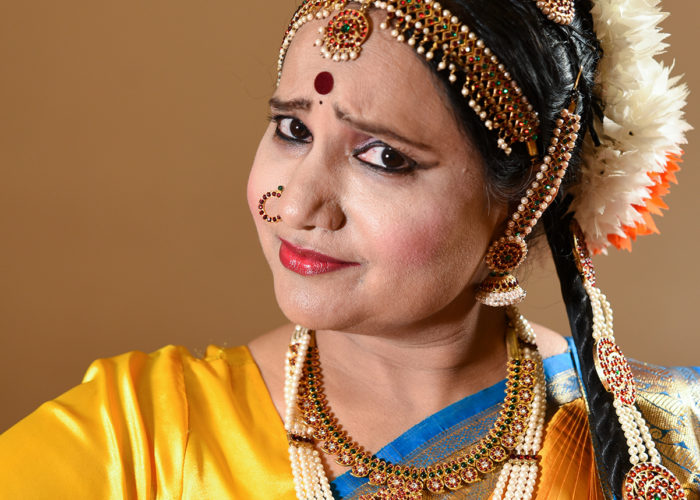 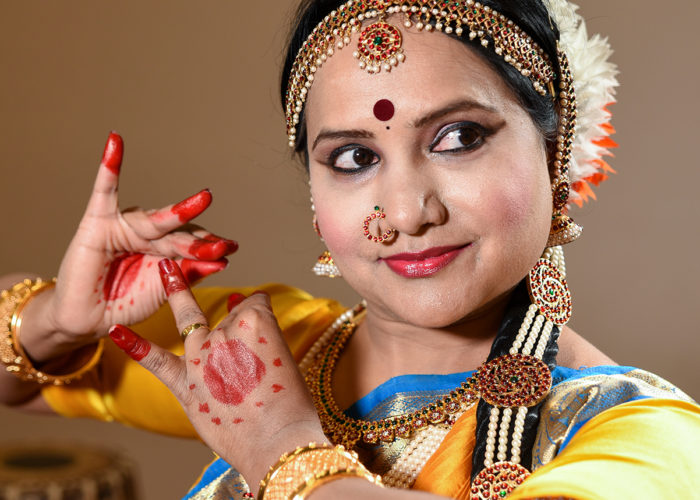 Dancers use hand gestures called mudras to convey different ideas, such as a woman fastening her earring 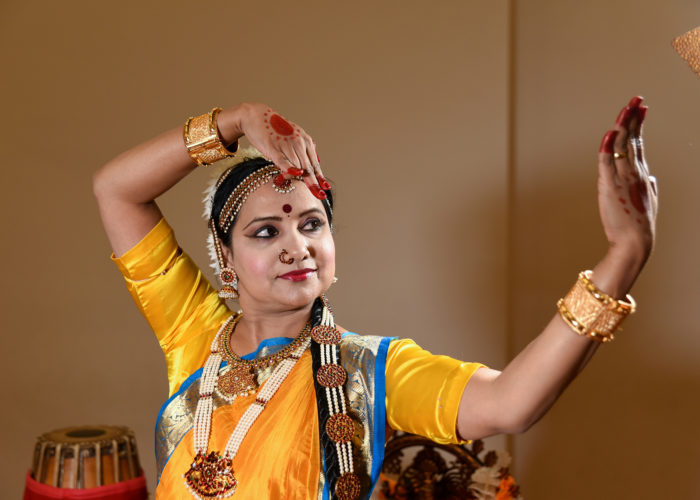 Mudra, hand gesture, depicting a woman applying a bindi, a red dot worn on the forehead, while looking in the mirror. 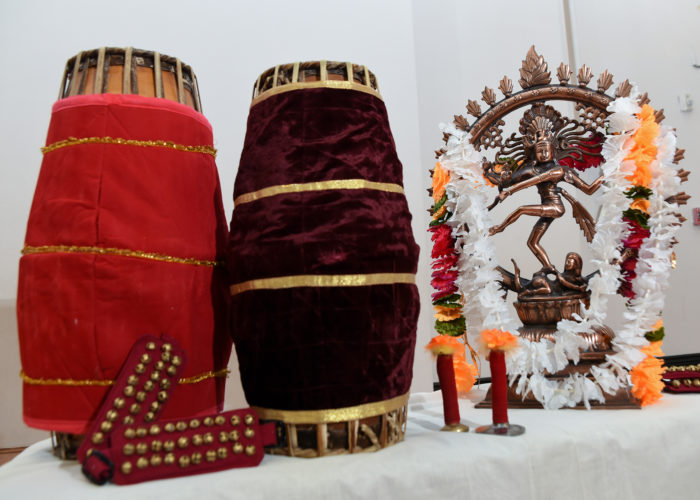 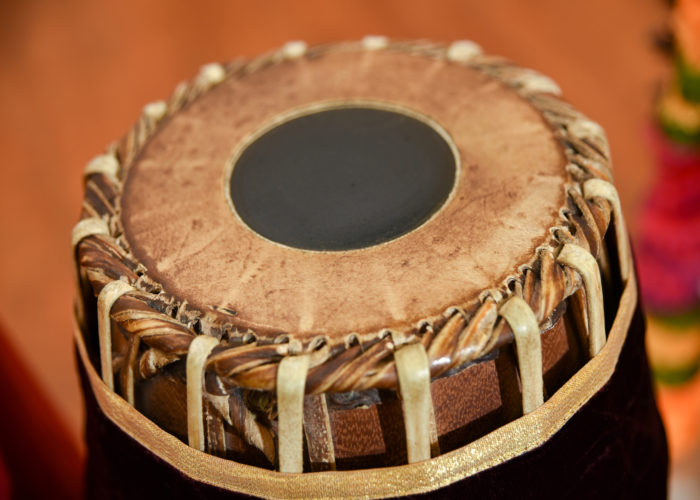 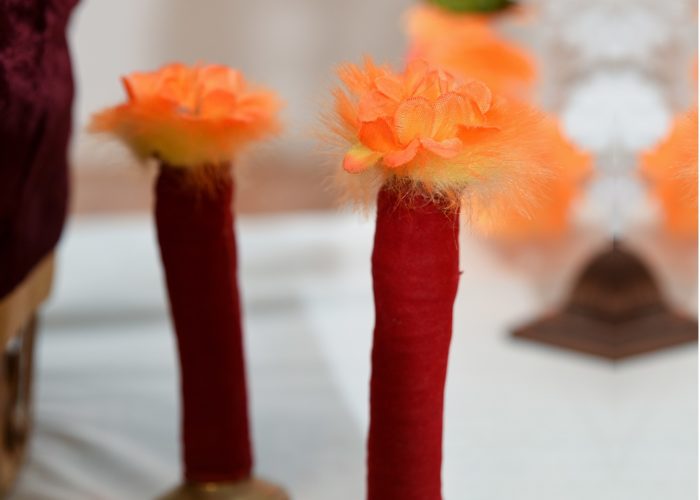 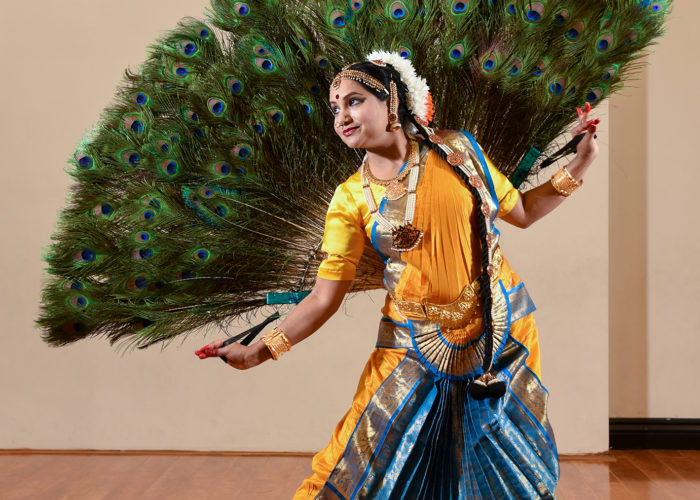 In India, peacocks represent beauty and knowledge and feathers are sometimes used as dance props. 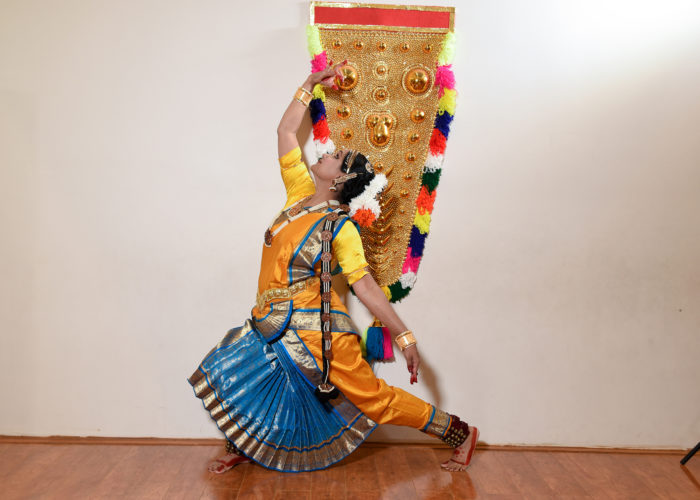