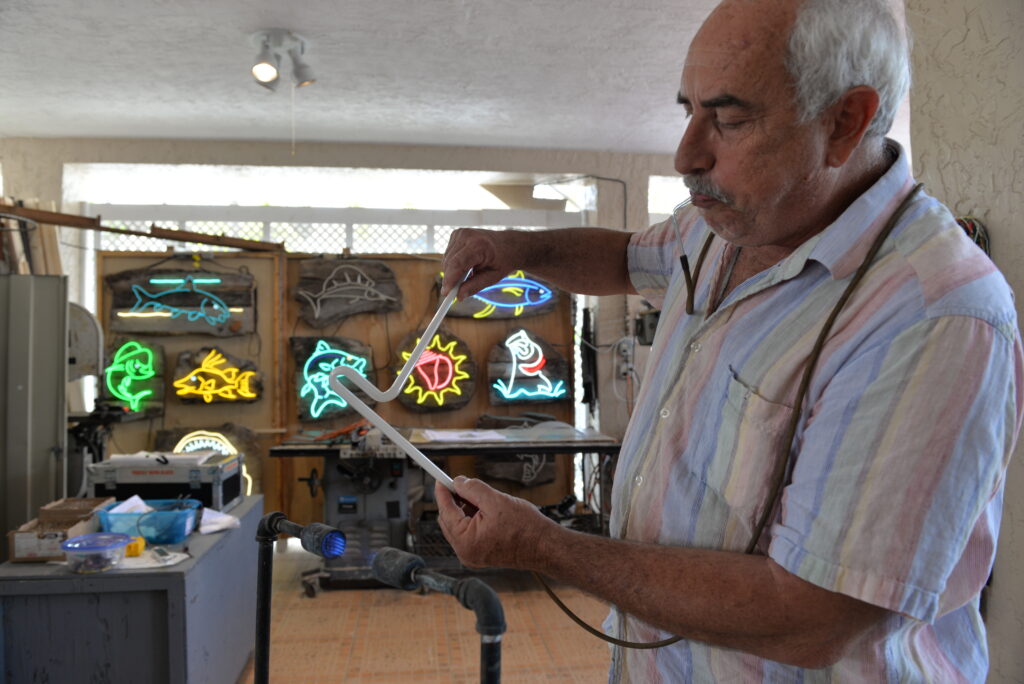 My name is Steven Michael Moser, Steve Moser casually. I was born in 1953 in St. Louis, Missouri, the “Show Me” state. I grew up in St. Louis primarily, though I lived in D.C. and Iowa for a time. Then I decided I had enough of winter and moved to Texas for 10 years, and I visited Florida many times and I liked it, especially the water. I think I got lucky, so here I am in Key Largo. I moved here in 1989 officially, 27 years ago. I came here to be on the water.

When I got out of school I wanted to build and create things rather than do office work. I’m very obsessed and compulsive about high-end, meticulous work, which is a good trait for making things. I primarily did wood working, remodeling, building furniture, cabinets, and mill work.

Then I met Cindy the Neon Lady and got a flamingo from her. I ended up spending 9 or 10 years working with her. She had a shop where she did mill work and contracting, and I had space in my wood shop for her neon business. She had gone to neon school to learn to make neon. When she set up shop I watched her work, and I was fascinated by neon and wanted to learn. Working with neon was a natural combination for me because I’ve always been a hands-on guy and this was another outlet for my need to create with my hands.

Making neon is definitely very hard and a lot of time is spent doing it and practicing. But if you stick with it and have a natural ability, that helps a lot. There’s a lot of frustration involved, lots of bad glass, lots of bending that breaks. It’s part of learning, though. Nobody can magically become a good glass bender. I was a licensed pilot and had been flying planes for 10 to 15 years, and it’s easier to get a pilot’s license than it is to learn how to be a good tube bender.

The wholesale business was going up and down so we moved to Miami together and set up shop in Overtown, down on the Miami River. It was a cool shop. We were there working with the ups and downs of the business cycle, and we were a couple and a little in love. But in 1998 she moved back to be with her family in Texas and I’ve been soloing since then.

When I moved from Miami to the Florida Keys the economy was really bad. I didn’t have a website yet and my business depended on old-fashioned word of mouth, yellow pages, that sort of thing. I started making Florida Keys-related fish and neon stuff. I did all of the local seafood festivals and shows down here. Neon is a little pricey, and the economy was bad, but it was a little bit of cash coming in and my creativity had an outlet.

I’m obsessed with making fun, weird and cool things. My mind is always moving on to the next project. My brain is where I keep my ideas; I don’t sit and write them down. I have the idea, get the tools, and start making and measuring. I don’t really design or draw it up – if I want to make it, I start working on it and getting it together. Whether it’s neon or boats or furnishing projects.

Fundamentally, the craft of neon hasn’t changed at all. I’m doing the exact same style and types of bends that they’ve been doing for 100 years. There’s no good way to improve upon it. The only real advancement has been with the transformers and power supply side of things. The neon tube manufactured today is essentially the same tube that they used 100 years ago. George Claude designed it and 100 years later it’s still the standard. If you watch me do it, it’s the same as watching someone 80 years ago do it. It’s a really, really cool medium and people love it. It has a magical feel to it. People see it done and they still think it’s magic. And some people may follow through and try to learn it, but for most it’s pretty difficult.

You know some people say that neon is wicked evil and they will find any way to outlaw neon in inner-city and downtown environments. They think it’s cheap and sleazy, and it’s true that there’s cheap neon work that’s tacky and terrible. But really well-made neon is incomparable and can’t be beat for splash and eye-grabbing advertisement. Some of my local pieces are the outdoor Eternity Now sign and the Panther Coffee sign – everybody loves the Panther Coffee sign. I did the sign in Wynwood, the original one.

I’ve had commercial stuff in different TV shows. A Bruce Willis movie, “Mercury Rising,” had one of my neon pieces, and another was in the movie “Something About Mary.” So yeah, I’ve been around; for most of my wholesale work, I did thousands and thousands of neon lights that are scattered across the planet. I’ve shipped stuff all over the world. I’m sure a lot it will still be around when I’m not. Neon is forever, so they say.

It’s pretty cool that there’s so much neon in Miami. Miami has been good about that, the inspiration. I take inspiration from pieces here and decide how I want to make my work by adding creativity and thought to make it new.

Before coming to South Florida, I was in Texas for a decade and I loved the water down there, too. When I first came and saw the crystal clear waters of South Florida, I decided that I wanted to be a boat bum in the Florida Keys. So, the water is what drew me here. I like the outdoors here, and playing with boats. I feel lucky to be doing this in the Florida Keys, but neon is still a Miami thing, and that’s where the work and business are. Miami is where the action is.