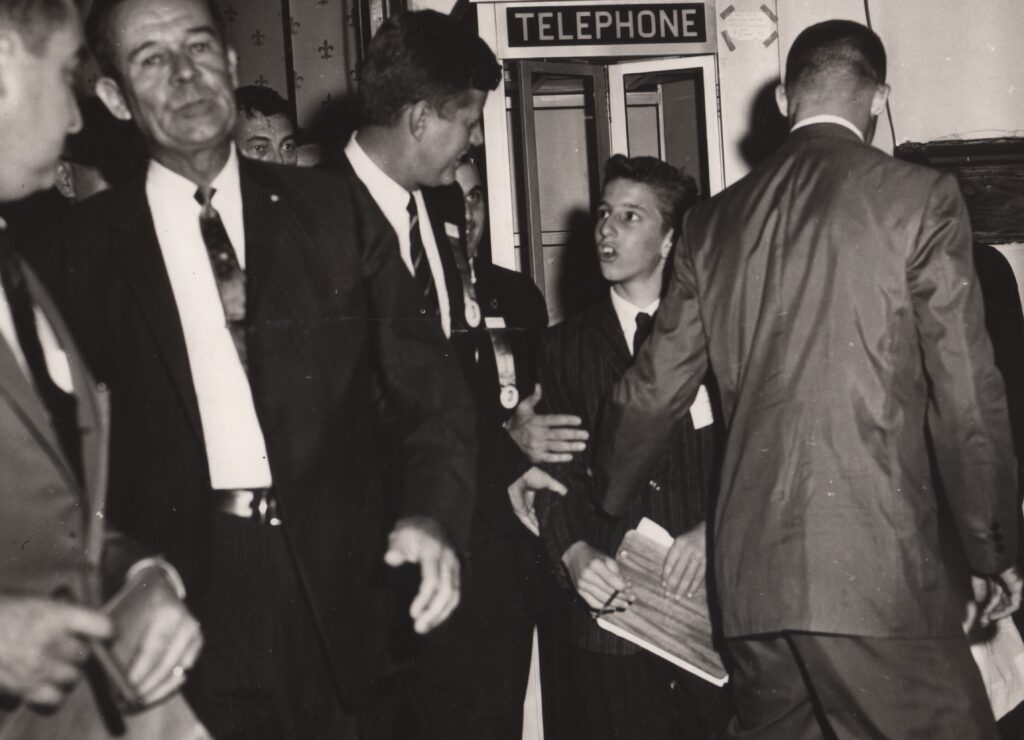 Much has been made of 16-year-old Bill Clinton meeting John F. Kennedy when Clinton was Arkansas’s delegate to Boys Nation in 1963. There’s even a famous photo.

Though I was a bit younger and lacked official recognition, I, too, met JFK. It was a combination of luck and living in Miami Beach. Perhaps a bit of chutzpah, as well.

I was 14 and in ninth grade when I met the president. The meeting took place Dec. 7, 1961, when JFK spoke to the Young Democrats at the Deauville Hotel before going up to the old Americana in Bal Harbour to address the AFL-CIO.

A man from the Young Democrats spoke to our TV civics class one morning. He told us that “grass-roots involvement,” as exemplified by Young Democrats, was the heart of our political system. To illustrate the importance of his organization, he noted that Kennedy would be speaking at its convention the next morning at the Deauville.

“TV civics” might be a confusing label. It was new then; by now it’s likely obsolete. The entire Nautilus Junior High ninth grade — some 400 kids — was herded into the school auditorium. Big television sets sat on rolling towers throughout the room. The TV lecture, about 25 minutes’ worth, went to students all over Dade County. After the TV portion, our on-site teacher would reprise the information and try to get a discussion going.

I thought it would be cool to see JFK. I went to the teacher in charge of the school newspaper and told her I’d like to cover the speech. Although I wasn’t on the staff, she said that if I could get myself invited, she’d sign me out of school for a few hours — a worthy goal in itself. I called the Young Democrat who’d spoken at our school and he set it up. I also arranged a pass for an “assistant,” a role I assigned to my younger sister, Donna.

I knew the Deauville well. It was about a mile from where I lived, and I’d checked it out many times. I often walked up the beach, wandering from hotel to hotel, comparing the pools and cabanas and evaluating the concourse shops. The Deauville was a fancy place, but like many of the newer ones, it was built on a strip too narrow for a good beach. (I imagine the city fathers would want me to point out that today the beach is much wider, thanks to a massive infusion of sand dredged up from the bottom of the ocean. The new sand is nowhere near as soft as the old stuff, though.) Instead, it had a big pool and a concrete deck. That seemed tacky to me.

The next morning Donna and I took the bus to the Deauville. Three years later, it would be where the Beatles stayed on their first Miami Beach visit. Today, it was going to host a speech by the president.

There were perhaps 100 people in the Napoleon Room, on rows of folding chairs arranged on either side of a center aisle. They faced a small stage with a lectern and a dais. I couldn’t see much from the back, so my sister and I grabbed seats in the front row. People smiled at us. We were both in junior high, a good deal younger than anyone else, and we looked about 11.

Kennedy arrived through a service entrance at the front of the room and got right to work. “How can the United States maintain its strength, maintain the peace, maintain full employment, improve the life of our people, spread its influence around the world, strengthen the cause of freedom, survive, endure and prevail?” he said. (That’s not a first-hand recollection — I’ve looked up the speech.)

From 15 feet away, I was mesmerized. When the president finished his remarks and people stood to applaud, I was seized by a sudden idea. I led Donna past the adults on our right and into the hallway he’d entered from.

In just a few steps, we’d left soft carpeting and flocked wallpaper for a concrete and cinder-block utility area. I stopped by a freight elevator. Now, down the same corridor Donna and I had just hurried through, walked JFK, trailed by security. Everyone seemed surprised to see us.

The president shook it. “Hello, young man,” he said.

I introduced Donna and myself. I gave my credentials — I was on assignment for the Nautilus Green and Gold.

“Mr. President, in our school we’re doing a play on Americanism. I wonder what you think of the idea.”

“That’s wonderful,” he said. That’s how I remember it, anyway.

I was about to ask if I could ride with him to his next speech, but several large men now had their hands on me. They weren’t hostile, but they weren’t friendly either. Not by a long shot. They didn’t seem to find a kid’s worming his way backstage to meet the president remotely endearing. Kennedy got on the elevator and the doors closed.

Maybe a week later, a friend told me that the Deauville had a photo of me with JFK. I still have it, in its original Deauville hotel folder. There I am with my oversized front teeth and my hair in a swoop as President Kennedy smiles and the Secret Service attempts to remove me from the scene.