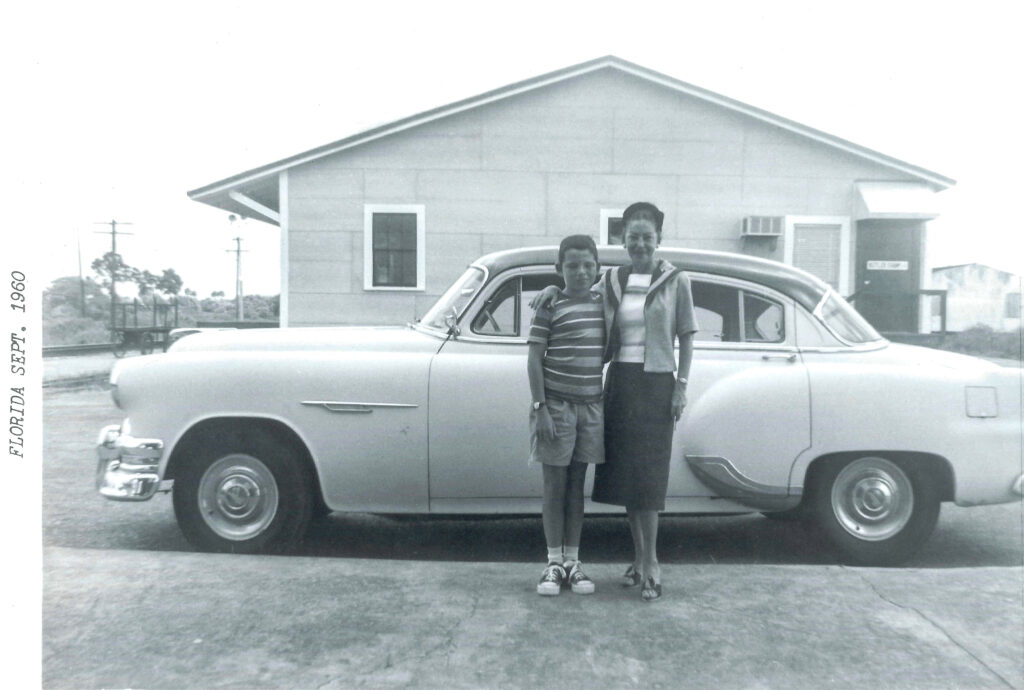 Dodge Island in the 1950s was very much like living on the frontier. We got there by boat and had no neighbors and few visitors. We had no phone service or TV; in fact, we had no electricity at all except a generator that worked for short time when we brought gas from Texaco near the Coast Guard station. We had the only house on the island built from Dade County pine. Our social center was the dock and the living room with a Ben Franklin stove built into the big fireplace. Our shower was outside. I was the only kid on the island with 77 acres to explore.

John, my stepfather, was in charge of the 40-foot crash boats that served as the rescue boats at the Miami Beach Coast Guard station.

We went on many rescue missions for boats in distress. Huge yachts and large sailboats were in need of assistance every weekend as well as small fishing boats and families on fun day trips. Toward the end we would find small boats in poor shape with Cubans fleeing Batista and, later, Castro. We would frequently pull boats off sandbars and give them gas and water. The most dangerous task was getting the skippers of big sail boats to sign permission slips during rough seas.

It was fun to go to South Beach Elementary school during 1950s. The Coasties would pick me up on Dodge Island and take me to school each morning. What a fun way to start the day!

One time a group of Coasties joined us on the dock. We always had great fishing there, mostly snapper. Over several days we lost a lot of hooks and bait to a mysterious fish. It became a challenge to find out what was beating the attempts of sailors and fishing folks to catch it. One night I jokingly suggested trying to catch the mysterious thief by loading up an anchor with bait. We threw it in and then we waited. After a while we saw the wire rope move and soon it got taut. Then we heard a loud noise and the dock started shaking. We all ran for our lives off the dock. Whatever was hooked pulled the end of the dock into the dark water, never to be seen again. And we never learned what it was.

We originally moved to Dodge Island at the invitation of “Wild Bill,” a long-time friend of my parents’ and the lease holder for the island. His wife was pregnant and she feared living on an island with no phone and uncertain ways to get to the hospital. Wild Bill then asked us to take over the 99-year lease for the two Dodge Islands. Later, in 1960, the City of Miami informed us that they were breaking the lease with 66 years left on it and gave us two months to move and no compensation.

It was sad for us as this was the only home we ever had. It was an environmental disaster for Biscayne Bay because the island’s mangrove trees provided a nursery for fishing. And it was an economic boon for Miami as our former home became the Port of Miami. Cruise ships now visit the world from where our dock once stood.

One of my most exciting adventures happened after the City of Miami forced us off the island. My Boy Scout troop wanted to go on a camping trip. I suggested Dodge Island. John got permission to visit the island and for the Coast Guard to provide transportation. We went to the island on the Coast Guard boats and all went well at first. Then some of the boys wanted to leave, so I led them to the water where we noticed the weather acting up.

John appeared in his boat and said an unexpected hurricane was approaching and it was too dangerous to pick us up. He said we were safer on the island than we would be in the city. The hurricane came while we were on the island. Then it seemed over and we walked to the shore of Government Cut. The water had drained and I saw some interesting items on the floor of the Cut. I walked out into the now-dry Cut and picked up a sea fan. Then I realized we were in the eye of the hurricane and ordered everyone to run back to shore and into the woods. After the hurricane passed everyone returned safely to Miami Beach with stories to tell of our great adventure.